Singapore Dance Delight, or known in short as SDD, is one of the biggest dance events in Singapore where dance teams from around South East Asia compete against each other to be crowned as the champions of SDD. This year, the preliminaries were held in Scape with 45 dance groups participating and this blogger here happens to have a chance to attend this awesome dance event! So without further ado, let me introduce you to the stars of the day!
The handsome blogger behind this post, who managed to secure an awesome Canon 60D from his hall's media wing, EusoffWorks for the day's event, Lukey Phang! 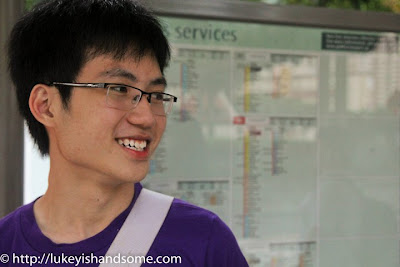 And his two bodyguards, I mean friends accompanying him, Xian You and Sarah Tan!
Oh, and not forgetting the reason why we are attending SDD, Wilfred Lim! He's one of our friends who was participating in the event itself so we're there to support him! Roar!
Now that we're done with the introductions, we can now move on to the event! (I realized I've been using a tad too much of exclamation marks, but who cares!!!! Sorry.)
As it was raining previously, the dance which was originally planned to be held on Scape's Sky Terrace, had to be moved in to a small indoor area due to the wet stage.
Which was not really a good thing because the three of us were not able to enter the contest area due to the the large crowd and the limited space inside.
Sarah Tan got quite angry, you know, for not being able to catch the first few dance performances.
Just joking. After we realized that we have absolutely no chance to catch the performance live, we settled for the big screen outside the contest area instead. Still did not cure our disappointment though for having missed the first few groups while we're queuing.
Not forgetting that the quality of the screen and camera was nowhere near good. Everything was blurry and when there's a light shining on the screen, you can't see anything. But we're not complaining. At least we managed to catch Wilfred's item on it.
And speaking of which, another friend of us, Han Rui, also came to catch Wilfred's item!
Thankfully, the organizers managed to clean the open area in time and as the sun set, the competition moved outside. Finally we can watch the dances live! No more cui big screen!
The amount of people that gathered was huge! 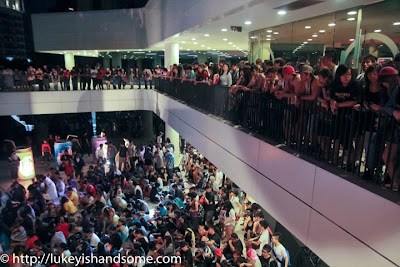 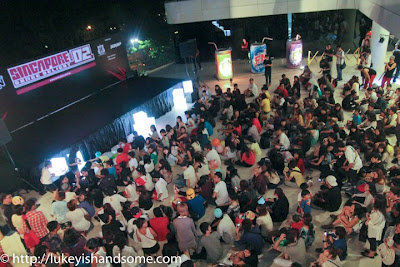 We even have other bloggers (I think, judging from their camera etc etc) 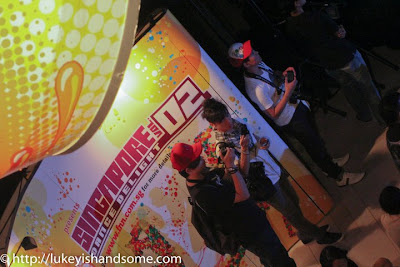 and families joining the event too! 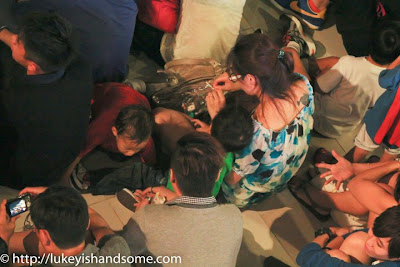 Which is why I said that this was one of the largest dance events in Singapore. And let me introduce you to the emcee of the night, a cool fat dude!
I forgot his name, but never mind. I just remember that he used to be a quite popular celebrity last time, according to Han Rui. And I also remember him going "Yeah, yeah, let's get the party started yeah!". So yeap, let's get the party started with loads of pictures! (I forgot most of the group names, so I'll just let the pictures do the talking until I remember some of them :p) 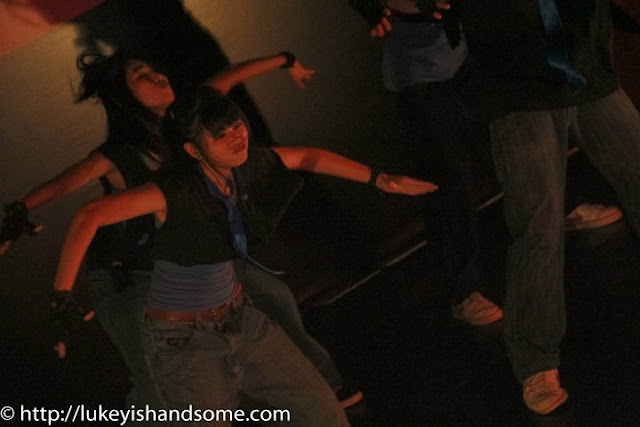 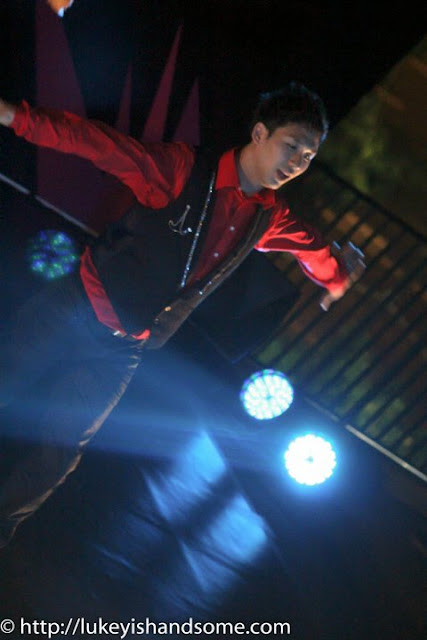 And introducing Joyce and The Boys! One of Singapore's most famous dance groups who awed the audience with their insane popping moves! 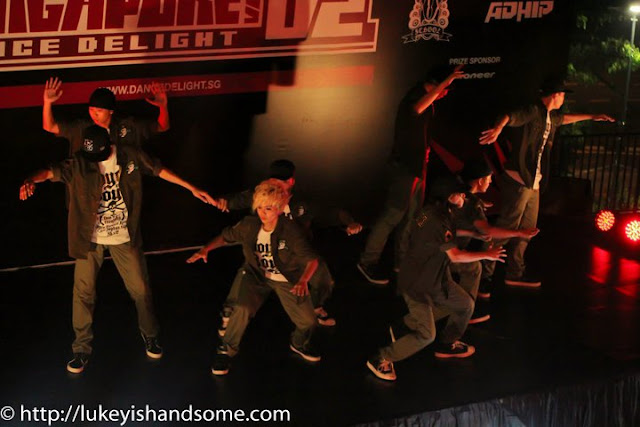 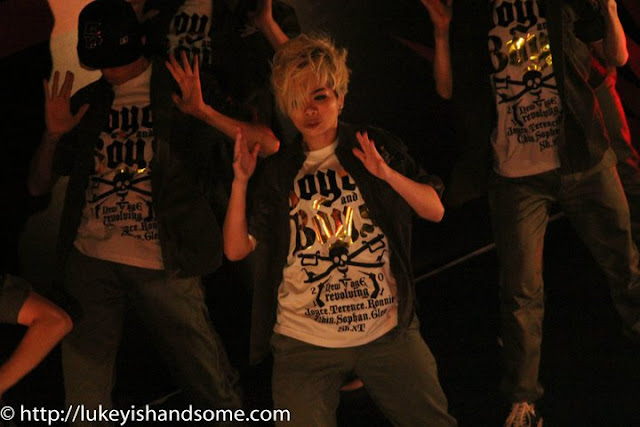 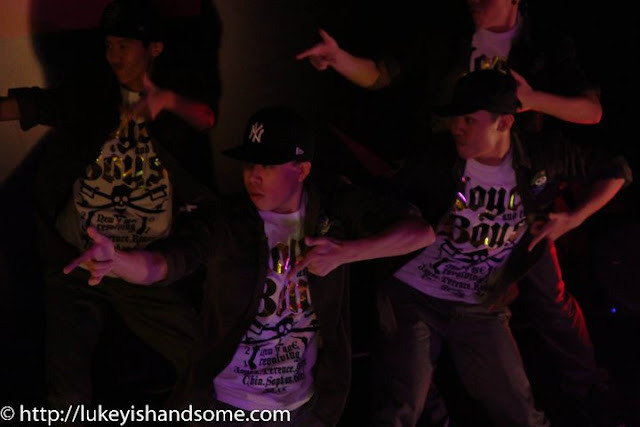 Next up, we have the mimes coming in! They're not called the mimes, by the way, it's just their make up. Looks to me like Black Swan and Joker added together. But still, they have pretty decent moves. Didn't know Joker could dance. 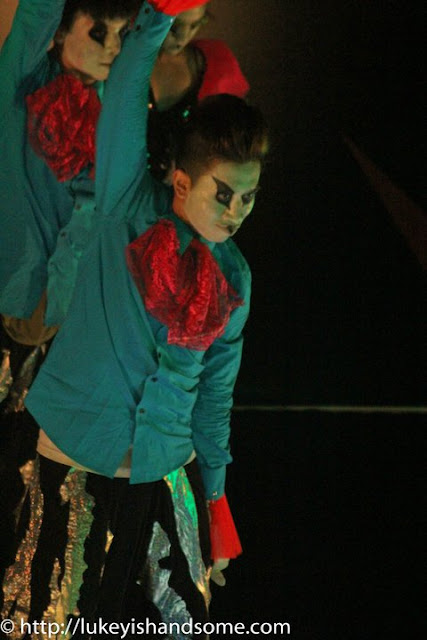 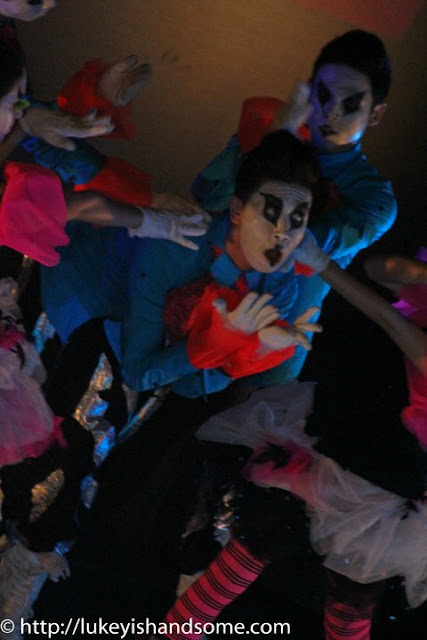 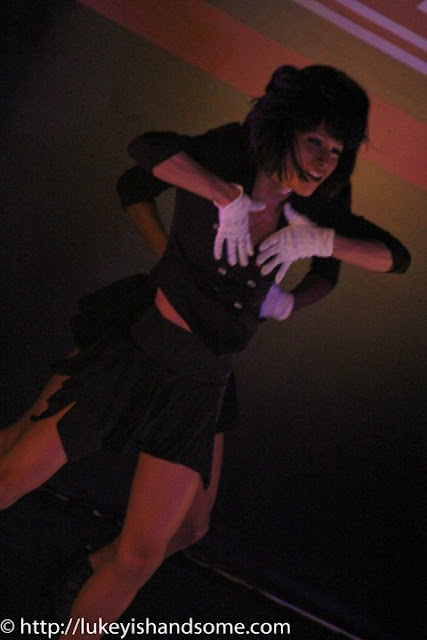 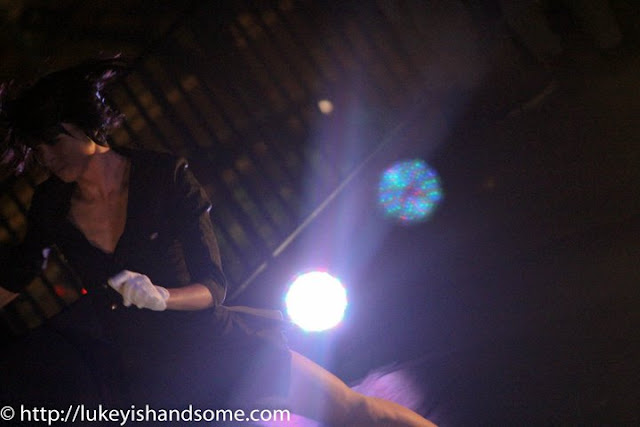 Sexy, right? Too bad they're guys. And flat. Perhaps if they used oranges it would be sexier. But oh well, I can't be asking too much right?
And speaking of which, it's not as if that there were no cute pretty dancers for SDD. In fact I managed to capture one of my eye candies on camera! And she can pop quite well too! Not to mention that she's hawwwwt. Fuh.
Among the other groups that we managed to catch: 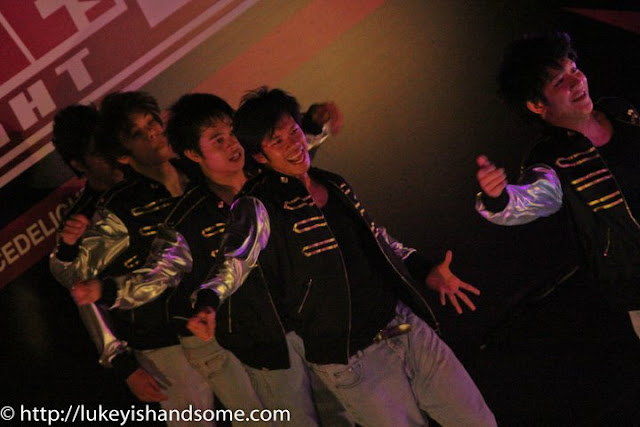 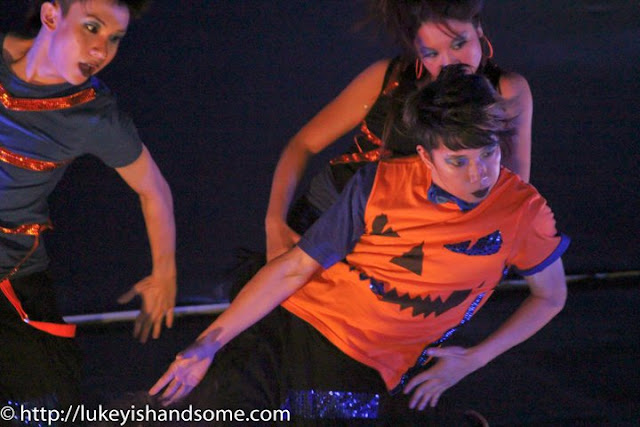 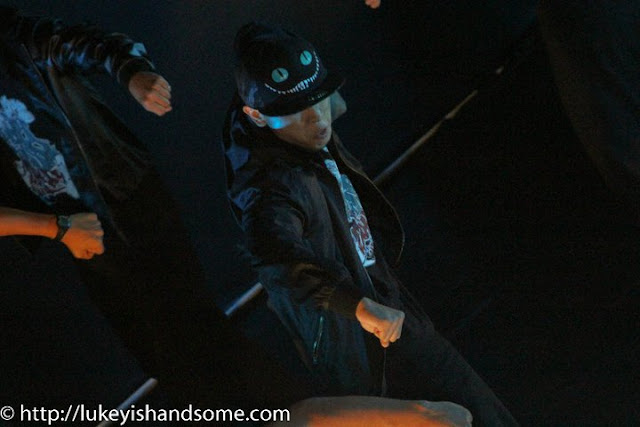 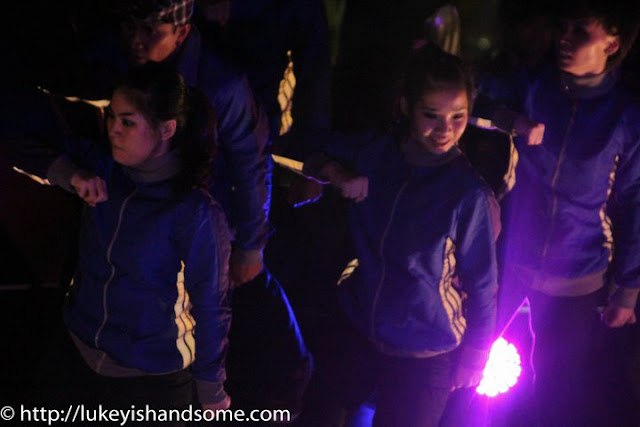 That's some insane popping they have there. Makes me wish that I can pop like the guy and have a pretty girl like her as my partner. But oh well, I'm just good with the camera.
Yeap, so those were the few groups that we did manage to see in action. Which is actually quite little, if you ask me, considering that there are 45 groups participating. But eventually our hungry stomach got the better of us. We left before all the dance finish and started to hunt for food. And can't really blame us for leaving early too since all of us had exams coming soon.
But all in all, Singapore Dance Delight Vol. 2 was a blast. I thought movies like Step Up 3 was an exaggeration of dance competitions but SDD was way over that. There are loads of powerful dance groups with loads of powerful dance moves, popping, locking, breaking, exploding, dynamiting, I'm going too far, and I really enjoyed myself watching all of them perform. In fact all of us were so thrilled by SDD that Xian You jumped high into the sky, 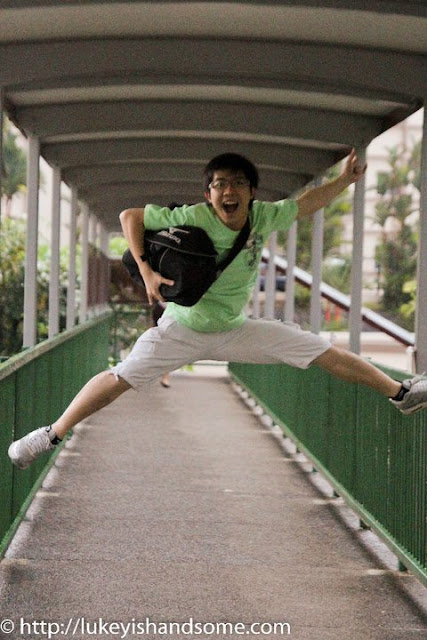 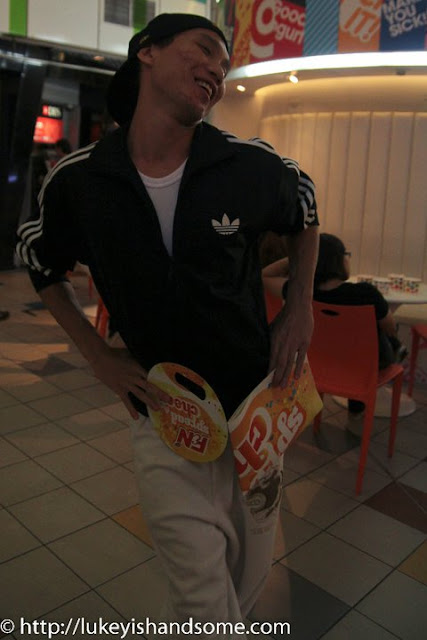 and Sarah was stunned by the sheer awesomeness. 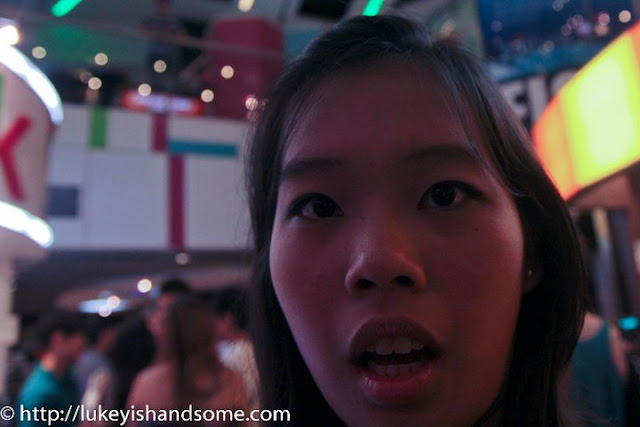 Great night indeed. And best of all, we even had free F&N Drinks for the entire night! Sarsi, Orange, Ice Cream Soda, you name it, they've got it. Which is quite cool cause you don't have many sponsors who are willing to give out their products like this, especially when the company is big and established. Cool sponsor indeed, F&N Sparkling Drinks is. The competition by the way, is held to celebrate the sheer awesomeness of dance and youth.
It's a shame though that we have to leave early as most of us have exams coming. I heard the after contest party was a blast and we just had to miss it. But oh well, no complains there. Back to reality now I guess. Time to study!


For more information regarding SDD or if you want to win some prizes from F&N, do drop by www.facebook.com/FnNFun, www.fnn.com.sg or www.twitter.com/fnnfun and who knows, maybe you'll win an entire year of soft drinks supply. No kidding.


P/s: For more SDD pictures that I took, you can visit http://www.facebook.com/album.php?fbid=10150436140255193&id=524345192&aid=626746
P/s/s: And yeah I know that all the pictures are filled with noise. My bad. I thought 6400 ISO would work perfectly fine. Seems like it's not. Definitely would not repeat the same mistake again
Labels: Blogging Life Updates Singapore Special Occasion