Today was really a random day. Or a really random activities day. Lemme explain why. 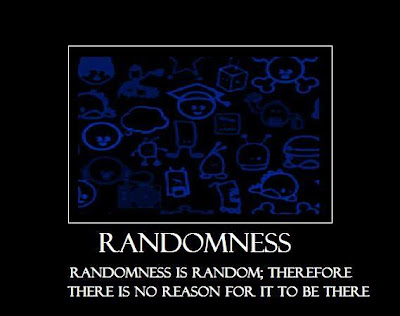 At around 4 p.m. today, the electricity supply to my whole hostel was suddenly cut off. On a hot sweltering day. Which meant that all around the hall, there were practically no working fan or air-cond to cool us down. We were practically gonna be cooked alive in our room under the heat if we were to stay. And as humans with a will to survive, being cooked to death was not our choice of dying. Me for example, wants to die peacefully on my bed at the age of 200, surrounded by my 200 grandkids, successfully earnedmy 200 billionth dollar and having screwed 200 hot babes.
Okay, maybe I should minus the screwing the hot babes part but the point is, neither me or my friends wanted to spent any more time trapped under the heat without any cooling mechanisms. We knew that we should get out of our hostel, no matter what.
But there was one small little problem. We have no plan of where we should go or what we should do. Besides, planning takes too much hassle anyway because there would be a lot of disagreements on the details. Everybody wants different stuff.
So we decided to name today as the totally random day. We are going to do everything randomly, there will be no planning involved and we are going to just go with the flow until the day ends. No planning, no discussion or whatsoever. Just plain spontaneity. (The idea itself was random but hey, that's the spirit right?)
So the first thing we did was get down to the Kent Ridge Bus Terminal and hop on to the first bus that comes. No questions asked and no objections. And we're gonna let that bus takes us to whichever place that has air cond where we can engage in random activities and dinner. 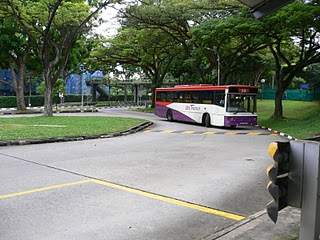 I must admit I was quite afraid at this part because I was half expecting us to end up in some god forsaken place but thankfully, NUS is quite central and all the buses that passes through Kent Ridge Terminal is able to bring you eventually to a shopping mall somewhere in Singapore.
And thankfully for the second time, it was the usually rare Bus 10 that arrived first. And Bus 10 usually means Vivo City, one of the biggest shopping mall in Singapore that is nearby to the Sentosa Island. So five minutes later, we were all happily on our way to Vivo City.
Once at Vivo City, next we had to decide on what random activity to do to burn our time. It was around 4/5 pm. Watching movie seems to be a good idea so after a bit of discussion (yes, we broke the rule here), we settled for a 9.40 pm movie. One that is called "Fast and Furious 5". 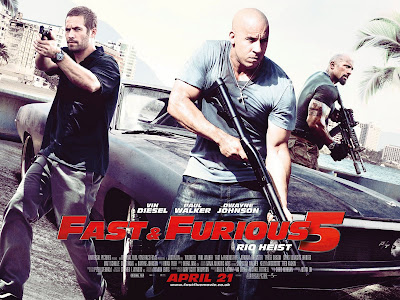 We still have 4 hour plus of free time though, so it's pure randomness from then onwards til the movie!
For the #3 random activity (after the bus and movie) of the day, me, Huang Hua and Tee Hong went to buy Gong Cha to quench our thirst. We did not anticipate the queue though, it was freaking long (I think we had the sun to blame) and in the end, we spent quite some time waiting to get ourselves those cup of bubble milk tea. And in the process, I think I must have changed my mind about 127562134 times on what to drink. There's just too much choices! (I eventually settled on a herbal jelly milk tea, which I regretted because Tee Hong got a better drink!)
With our thirst quenched, it's time for the random activity #4!
And for the fourth random activity, we headed up to the arcade at Vivo's Skypark and played (guess what?) Guitar Hero! And thanks to this randomness, I can proudly announce that I'm no more a Guitar Hero virgin! Hohoho.
And with this being my virgin experience, I must say I pretty much suck at the game. Had a face off with Huang Hua and out of the 2/3 times I played, I pretty much got thrashed. But luckily for the final time, I owned. At least I still saved some face for myself. And thanks to the 5 minutes of Guitar Hero, I feel like buying an Xbox just for the game. Someone stop me from spending unnecessary money!
Of course, all these randomness needs fuel. And fuel comes from food. Lots of it. And for random activity #5, we had Carls Jr! 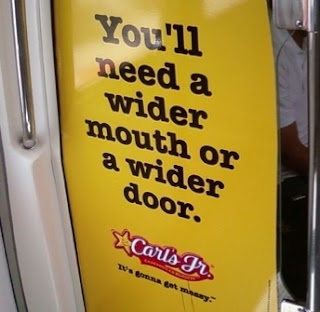 I learned from eating Carls Jr that I need a bigger stomach. Because I can't frigging finish the burger and fries together. Fuh.
And now that we have extremely full stomach, what else can we do in a shopping center? Shopping, of course! And to make it even more exciting, almost all of us are guys! Yeap, 3 guys went clothes hunting in Uniqlo. And the best part, all 3 of us bought clothes. Clothes that we changed into immediately after paying. And that.s random activity #7.
Here's mine that cost 9.90 SGD:
It's a steal!
And that's a total of 7 random activities in just one day.
For the #8 random activity, well it's a personal activity actually, I went to the toilet. And for decency purpose, I could only say that I had my own version of Fast and Furious with my stomach in the toilet. I have the Carls Jr meal to thank for that.
After settling my fast and furious stomach, it's time to catch the official Fast and Furious 5. I must admit I was quite looking forward to the movie because of all the hot girls (also hot cars) in the movie. Also the high rating given by critics also kinda make me wanna watch it.
To put it short, the movie exceeded my expectations. Way exceeded in fact.
The action sequences in the whole movie was superb. The driving skills displayed was really TOP. Especially the finale part. My jaws just dropped halfway through all the cars chasing, drifting and ala Burnout style of driving. The entire driving sequence makes you feel as if you're part of it, driving in the car along with them and it's that exciting that it makes me wanna just grab a car and drive like them. Too bad it's illegal.
The plot was also nice too. Along with the main plot, the director manages to intertwine a few sub plots together with it without confusing the audience too much. Not many people can pull it off you know, how he manages to focus on two sides of the story, one of Vin Diesel and another of Dwayne Johnson (the Rock, he looks cool with a beard and a bald head and his name is Luke!) and managed to join them together at the end of the story. Not only that, the movie also manages to include the story of the other characters as well, for example the love blossoming between Han (the lucky bastard Chinese or Japanese that appeared in Fast and Furious: Tokyo Drift that got Gal Gadot as his girlfriend) and Gal Gadot alongside the main story. In short, the whole story does not focuses on only one character as the center point of the whole story, but rather it gives you the "family" feel, as Vin Diesel would put it. It's about everyone, the movie.
And of course, there's the hot babes. And cars. And also hot guys (I'm saying this because my alter ego in the movie, Luke Hobbs aka Dwayne Johnson is hot with his beardee).
This movie is a must watch even though you're not a Fast and Furious fan. it has elements of humor, action, excitement and love. Almost everything that you want in a movie, you can get it.
And there's a hidden scene too after the movie, just like what they are doing with The Avengers. Which means there's a Fast and Furious 6!
Oh well, I guess that's all for the post today and before I go to sleep, let me end off with random activity #10. And random activity #10 is..... I spent 50 over dollars in one day! Which leads to random activity #11 which is I'm gonna eat cucumbers for the rest of the 3 months stay to save money!
Labels: Friends Life Updates Movies Rantings Special Occasion