I am a Minecraft Miner Now 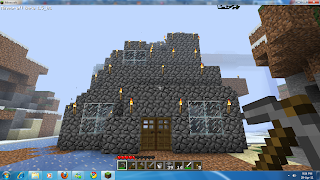 I am a sucker when it comes to computer games. If I find one game that I like, I could just sit in front of the computer, oblivious to the surroundings and what's happening around me, while immersing myself totally into the game. Having exceptional focus is not a bad thing but when your exceptional focus is on computer games, that's not a really good thing. Especially if you're a student. And especially x2 if you have exams coming.
But sadly, I the exceptionally x2 kind of guy. And I'm currently hooked on to this game called Minecraft. 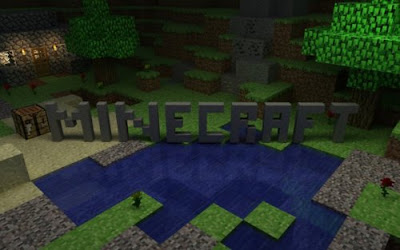 I first saw my friend Chee Eng playing this game a few days ago. To be honest, I first thought this game was something that was released 10 years ago due to its pixel like graphics and I wondered why would Chee Eng play such an outdated game.
Until he showed me what the game was truly capable of. And I was hooked.
As the people at Wiki put it, Minecraft is "is a sandbox construction game, inspired by Infiniminer, and created by Markus Persson, the founder of Mojang AB. The game involves players creating and destroying various types of blocks in a three dimensional environment. The player takes an avatar that can destroy or create blocks, forming fantastic structures, creations and artwork across the various multiplayer servers in multiple game modes," which of course, does not justice to it due to the really simplistic sentence.
Essentially, from what I experienced after 1 sleepless night of playing it (yes, I'd actually went to the skipping sleep extent), Minecraft is perhaps the most open ended computer game that I have ever played. You spawn in a random LIMITLESS (note the key word limitless, the world go as far as your computer can support), with a distinct landscape and terrain, filled with numerous resources and it is up to you to shape how you want the world to look like.
It's like paying God, except that you have to dig the necessary resources to begin building.
From one day and one night of playing, the things I managed to build was: 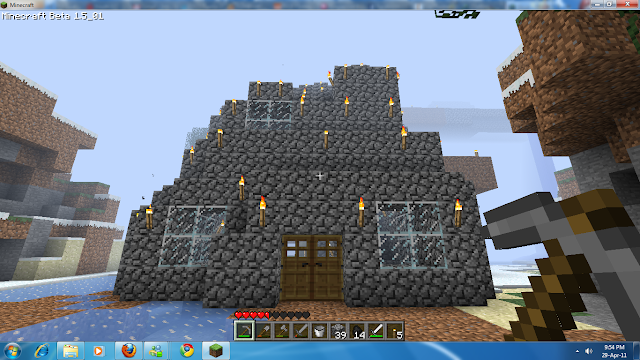 Yes that's my house over there. Like the stone age feel?
And also a human made waterfall, proudly constructed by Lukey. 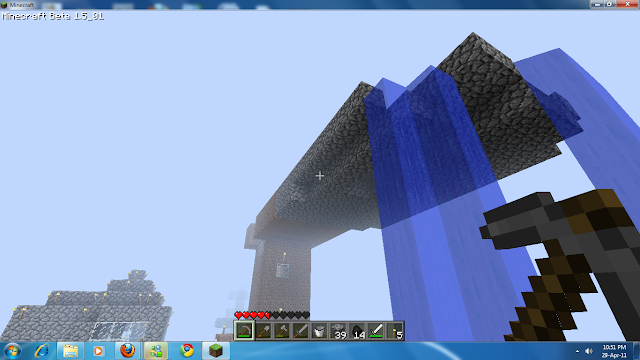 And if you'd noticed, my house is just right behind there.
But of course, my two works shown above are merely a product of a day of playing only. There are loads of people on the internet who are crazier than me when it comes to building. There's this guy who built the awesome castle or something like that: 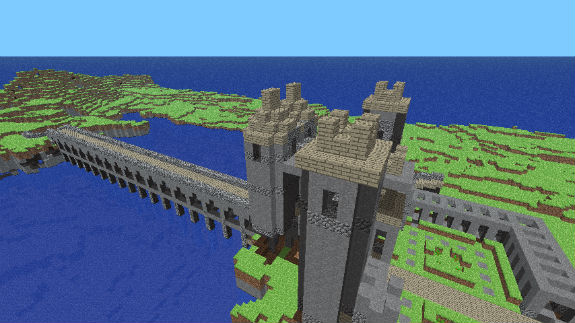 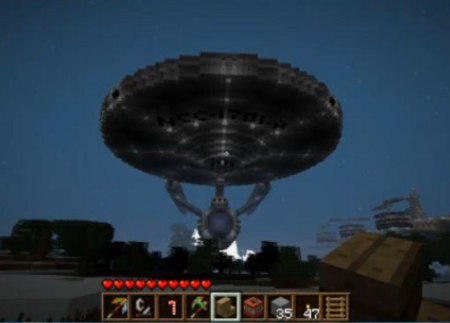 Which is why I like the game. The only limit is your imagination, not some stupid plot choices that the game developer want you to follow. You can work, I mean play, at your own pace and decide your own path in the game. Heck, if you're feeling up to it, you can even reconstruct things like the Death Star from Star Wars or the Great Wall Of China.
But of course, if you're the kind of person who prefers to be pointed in a direction, this game is not for you. Because you wouldn't know where to go.
Another interesting thing about this game is the day and night cycle. Not only you get to build the most awesomest stuff ever seen, when the sun sets, monsters also come out to play. Yeap. There are monsters in the game. And they only came out in the dark. Which makes working during the night or mining deep underground a lot more challenging but hey, that's another fun part of the game.
The game currently only costs about 14.95 Euro or 30 SGD or RM 70 to download, which is much more cheaper than many other games and it's on discount because it's still on beta testing. You would still get the game when it releases for free along with the necessary support so it's really a good deal. I had some money left in my Paypal account so in an act of impulse, I bought it. But I didn't regret it.
In case you're wondering how good the game can be, here's 3 videos to illustrate.
And I'm off to build my castle, I mean study!
Labels: Gaming Life Updates Rantings