"You know how they say we can only access 20% of our brain?
This lets you access all of it." - Limitless 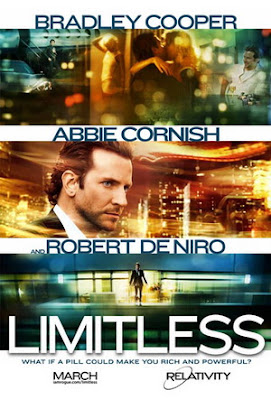 For starters, the 20% brain access thing is nothing but a myth. There's no such thing as unlocking your brain to the fullest potential or anything. Wikipedia said so. (http://en.wikipedia.org/wiki/10%25_of_brain_myth) So don't go around hoping there will be a drug like NZT soon.
And secondly, about the 20% myth thing, I think it applies more to the movie rather than real life. Because this movie could have been so much better if more effort was put into it.
I think I'll start with the bad parts of the movie first.
First you have the overkill of effects that wouldn't make any difference if it was there or not anyway. I don't know what point the director is trying to make but from what I experienced, it's more like trying to induce you with the feeling of using the drug itself. There's a few parts where they have this continuous zooming sequence that left nothing but me feeling dizzy. And it's the starting sequence. You don't really want to make your audience dizzy at the start of the movie, seriously.
And secondly, you have the plot. Oh the plot.
Disjointed and not making sense, that's what I would say. I have a hard time generally catching up with what the movie is trying to say or portray. There's this part where the main character has memory lapses here and there which resulted in him having fragments of memory of what he has done in the past few days. The director succeeded so much that even I feel that what I understand about the movies is but tiny bits of fragments that I need to link it all up. One moment you have the character doing this, the other moment he's doing that and the next you have him somewhere else again without a clear motive and course of action behind it. What just happened?
But overall, it's still an OK movie if you have money to spend on movies and you have just watched Source Code.
The movie has witty jokes here and there if you're looking for something with an entertainment value. And it has a good build up too, until you reach the climax, that is. Once you reach the climax, you can go sleep already. Because the director tries to hard to stuff a good ending into this movie that by the time the movie ended it will have you going "What?".
Apparently the lesson that I learned from this movie is that if you take enough drugs, your body will adapt to all the negative side effects until you become a superhuman. At least that's what the movie portrays to me.
Like I said this movie can be so much better. It can be limitless. But something went wrong somewhere and it ends up getting a 5/10 from me.
Labels: Movies