Another Glimpse into a Psychology Textbook

Studying in Psychology is FUN. Like Rebecca Black's Friday. Cause it not only teaches you about psychology itself, it teaches you about loads of other meaningful stuff also. Stuff that you can actually apply in real life, on a day to day basis like how to interact with people. So much better than learning how an atom works or how a building should be built. Ops.
So what else does Psychology teaches you? Below are some examples, taken from a Psychology textbook called "The Personality Puzzle" by David C. Funder. 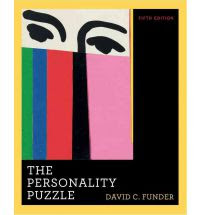 *****
It teaches you that aside from the psychology field, a psychology major can be successful in other career too, despite what others say about being not able to find jobs with a B.A. in Psychology.

"Another example... concerns my old college roommate, Rick. A psychology major long before I was (and now a successful fireman in Idaho -  Who says you can't have a valuable career with a B.A. in Psychology?)..." 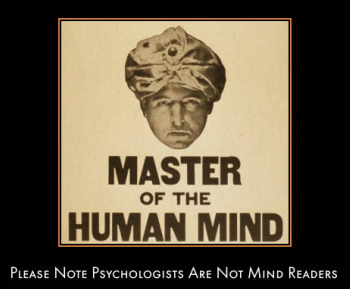 *****
It teaches you how to mess up people's behavior.

"...as the crowd gathered to watch Star Trek, he silently selected his victim: that person, he decided, was going to stand by the television with one hand on top, one hand raised straight up in the air and one foot lifted off the floor... As the program began to get interesting, Rick pushed the button and scrambled the picture. Various people leapt up to fix things but the picture cleared only when his victim stood. It scrambled again when she sat down. After she was standing, he raised the criterion. Now she had to stand closer, and then even closer to the television to clear the picture... before 7 PM, Rick's victim was standing by the television with one hand on top, one up in the air and one foot off the floor.
After Star Trek ended, Rick approached his victim and asked, innocently, why she had been standing like that. "Oh, you don't know," she replied, "the human body acts like a natural antenna.""

Ah, the joys of Operant Conditioning. Now I just need to get a pretty girl to say I'm handsome every time she sees me... Just kidding. 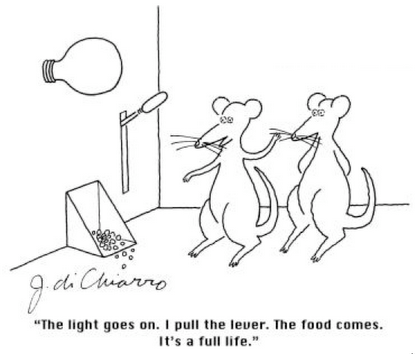 *****
It teaches you what kind of pranks you should employ to make fun of your friends.

"A while back, a student... signed up for a Sunday bungee jump. It cost him money and he signed up out of his own free will, so he must have thought it would be fun. As the day approached, however, he became noticeably more nervous (the funeral plans made by his fellow students may not have been helpful)..."

The next time my friend signs up to do something dangerous, I'm gonna arrange a fake funeral plans for him too. Oh wait, this is an Asian society. I will get slapped. 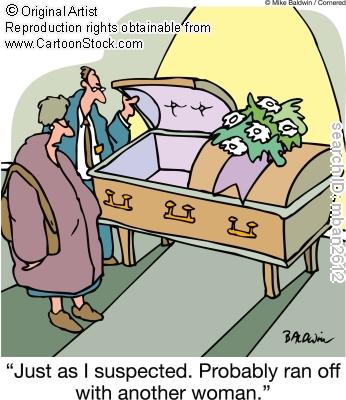 *****
It teaches me the reason why the most handsome and prettiest people are usually single. Something to do with the expectancy value theory by a person called Julian Rotter.

"Its basic assumption is that behavioral decisions are determined not just by the presence or size of reinforcements, but also beliefs about the results of the behavior are likely to be. Even if a reinforcement is very attractive... you are not likely to pursue it if your chances of success seem slim. Conversely, even something that is not particularly desirable might motivate behavior, if the chances of getting it are good enough." 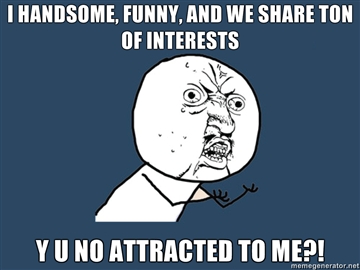 *****
It teaches me that the human mind, or specifically the short term memory (the memory that we use while thinking and doing stuff; an equivalent example would be the RAM in the computer) is limited and we can only store seven (plus minus two) chunks or information/idea at one time. Not any more and not any less. And one of the reason why I suck at socializing is because of this.

"A danger inherent in the limited capacity of STM (short term memory) is that it might fill up with the wrong things. For example, a shy person might be thinking, "Do I look like an idiot?","I bet she'd rather be somewhere else","Why does nobody like me?","I wish I were home in bed," and "Argh!" all at the same time, which leaves only a couple of chunks left over to actually carry on a conversation. The result will be the shy person may seem distracted and confused and either babble incoherently or be unable to say anything at all."

Which explains the situation that whenever I go and give talk in front of everyone, I tend to go off course and start rambling about how my cat jumped off the roof when I'm supposed to be talking about something else. Too bad the book never talk about how to get rid of the thoughts.
Perhaps a formatting of my brain would work? 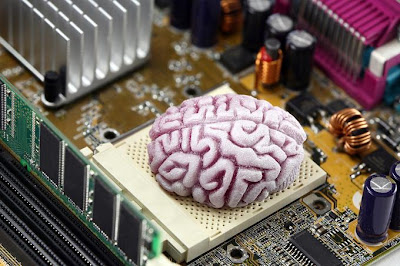 *****
It teaches me the correct way of studying. The method of repetition vs elaboration.

"The only way to get information into the long term memory... is not just to repeat it yourself, but to really think about it (a process call elaboration)... This principle of cognitive psychology yields some useful advice about how to study. A common strategy... one that usually fails dismally, is the rote repetition technique. You have all seen college students with their yellow highlighter pens, marking passages in the textbook... To study, they go back through the book and reread everything highlighted; if they have the time, they do it again and even again.
A much better strategy would be to take each of these highlighted passages, pause, and ask yourself several questions. Do I agree with this statement? Why? Does this statement remind me of anything in my life? Is it useful for anything? ...If you can generate an answer to each of these questions, you are more likely to remember the statement you are asking them about. Moreover, you might actually learn something."

Which is why dead memorization is useless. But still many people do that. Which is good news for me, because I happen to employ the elaboration way of studying since young, many thanks to my dad. I just hope other psychology students won't use the elaboration method after reading this. The whole NUS is based on bell curve, after all.
And time to throw away my highlighters!
*****
It teaches me that not every is the same.

"Different kinds of people, with different experiences and outlooks on life, will remember events in a different way."

Which is exactly why we need to learn to look from another person's perspective to better understand them. And stop imposing our standards unto others.
*****
It teaches me to have goals in life because it is by having goals that we have a sense of direction in life. It is our goals that ultimately determine where we go to.

"When a person has few or no general goals, or spends time in activities that do not serve general goals that are important to him or her, then life is chaotic and disorganized, and nothing that really matters seems to get done. Moreover, if you lack general goals or any clear connection between your daily activities and general goals, your life may seem to lack meaning and your general motivation may seem to suffer. Indeed, you may become depressed."

My point exactly. Explains why people who adopt the live for today and enjoy it to the fullest thinking to the extreme end up doing loads of stupid stuff like promiscuous sex, drug abuse and all sort of crazy activities. Because they don't have a future planned. 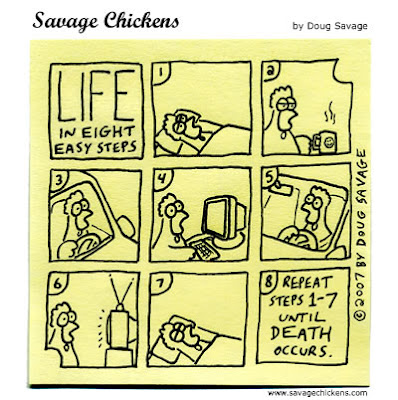 *****
It teaches that if you want to succeed in life, you are bound to get haters.

"...if you put all your efforts into getting people to like you, you're unlikely to get ahead"

Which means that I'm not successful yet, because I have yet to get any haters. But I have a feeling physic students and engineers will be hating me soon enough. 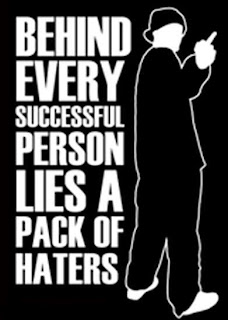 *****
It teaches me that our life is a product of our choice. We can choose the life that we want to live in.

"Behavior is determined only up to a point, after which choices becomes possible... even an abused child could reasonably conclude either (1) the world is a horrible place full of people who cannot be trusted or (2) I can survive anything, even abuse. Both conclusions are consistent with the child's experience. The secret of psychological success may be recognizing the choice points in life and responsibly making most of them."

Which means that despite no matter how hard we fall, we can choose to make the best out of it. It's all up to whether we want it or not only. 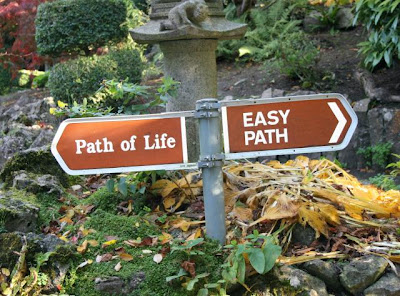 *****
So yeah, those are among the glimpses of what Psychology really is besides all the hyped up myth about mind reading, lying on the couch and having no future. Psychology can in fact be very interesting and insightful. And all the texts I used were only from 2 chapters. Imagine the wealth of knowledge an entire book would have.
But of course, I can't type out the entire book or risk being sued (I have no intention to violate any copyright btw, and I have no money to pay). You'll just have study psychology yourself.
There's another post where I offer another glimpse here: http://www.lukeyishandsome.com/2011/04/glimpses-of-psychology-textbook.html
Labels: Funny Life Life's Philosophies Psychology Rantings