Yesterday was the second time the EHOC (Eusoff Hall Orientation Committee) Programmers met up for the preparation for Eusoff Hall's second annual exposure camp for NUS Freshmen and also Freshwomen (gender equality FTW!). Despite my initial reservations of how unprepared we seem before the first meeting, I must admit that things are looking pretty good by the time we ended our second meeting.

In just two days, we have managed to come up with the whole itinerary, the games, the theme and pretty much everything that could be settled in two days. Which is already quite impressive. I was half worried that things would not turn out fine at first because I never had the experience of heading such a big and important comm like EHOC Programmes. Perhaps my genes dictate me to be good at the smaller stuff and not mega projects.

But still, so far things have been pretty good. The Programmers are one bunch of dedicated and capable people and I am more happy to be working with them. Given the progress that we're making, I can say that the Eusoff Hall Exposure Camp 2011 is gonna be a great one. Though we may have a little problem though. A lack of manpower and participants.

We currently are looking for Eusoffians to become group leaders and also 20 more participants to hit a nice number for the camp. Not that we have not enough but just like they say, the more the merrier right? 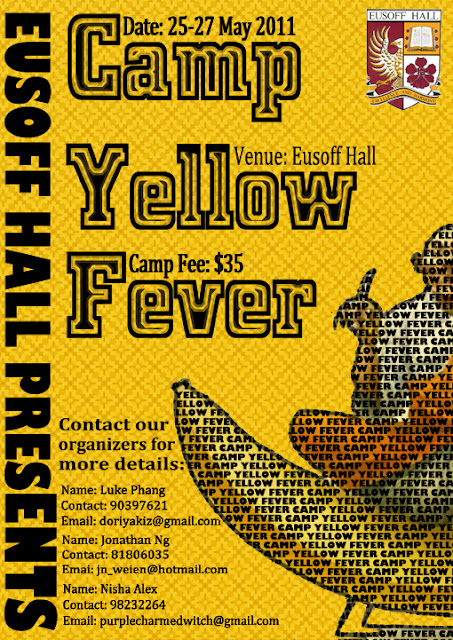 I think I'm gonna come up with a post of 10 reasons why you should join Eusoff Hall's Orientation Camp later. Maybe after dinner. When there's enough fuel to power my brain.
Labels: Eusoff Hall