Found myself listening to Disney's Hercules songs again today. Songs like "I Can Go The Distance", "Zero To Hero", "The Gospel Truth" and "I Won't Say I'm In Love" to name a few. It makes me feel nostalgic listening to them.
Not because the movie made a great impact on my life (it was still a great movie) but it's just that every time them, it kinda takes me back to the time when I first entered Form 6 (A Levels equivalent) back in Malaysia and I had the chance to participate in the annual school play based on the Disney movie Hercules.


Life was much simpler and happier back then. When school uniform was still the norm and the biggest concern of the day would be to finish my homework.
Joining the school play was perhaps one of the biggest life changing decision that I made back then. And definitely one of the best.

I was much more of a timid guy back then. Out of the entire school, I had only less than 10 friends that I knew when I first entered Form 6 even though I had been there for 11 years already. So yeah, I'm the typical Disney lonely-friendless-nerd.

When the teacher in charge of the school play called for auditions during one of our orientation days, I remembered feeling excited and part of me really wanted to join. Heck, I even wondered if I could be the main character, which was Hercules for the play too. But then again, growing up hearing people telling you that you can't and you shouldn't do anything crazy or risks being shamed made me think twice. I had half wanted to let the opportunity pass at first. But thankfully, I have crazy friends who would just to anything out of the sake of doing it and before I knew it, I was being dragged up to the stage together for auditions. 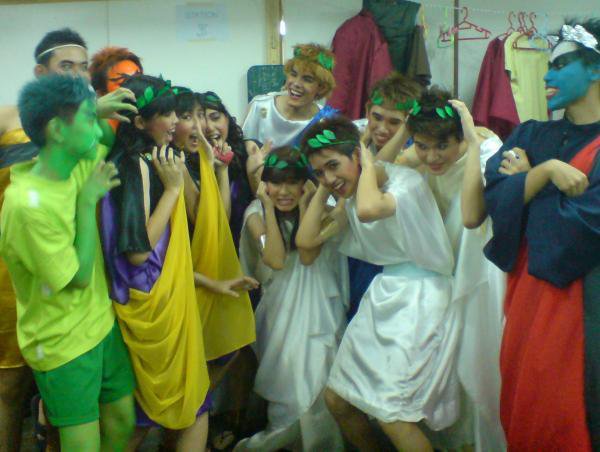 What followed... what followed was three months of intense fun and an awesome experience. I came to know a lot of new friends through the play, friends that shaped up my Form 6 life, and we shared a lot of laughs, sweat and even scolding together during the three months. Not forgetting that I also met my first girlfriend there :)

And thanks to this experience, school wasn't that boring because I have something to look forward to everyday.

To put it simply, if given a chance, I would do it all over again. Even though if I get my sidekick role again. Because experience like this is invaluable. It's not often that one would get the chance of performing on stage. And perhaps one day into the future, I will look back and smile at the experience. Except if you become a Broadway actor in the future, but that's a different story.

The experience changed me quite a lot, to be honest. Although half of me is still timid, I am much reluctant to let opportunities like this pass nowadays. Because experiences like this add colors to life and make life so much more meaningful. And who knows, I might find another girlfriend again through stuff like this.
Labels: Random Rantings