Of Love and Hate and also Good Friday

Today is Good Friday, the day where Jesus died on the cross for the sins of mankind. And before he was crucified, he left a message that will be forever remembered as one of the greatest ever, loving one another. Be it your friends, your neighbors or even your enemies, love them.
Love one another. As I have loved you, so you must love one another (John 13:34)
But I tell you who hear me: Love your enemies, do good to those who hate you, bless those who curse you, pray for those who mistreat you (Luke 6:27-28).
Do not repay anyone evil for evil. Be careful to do what is right in the eyes of everybody. If it is possible, as far as it depends on you, live at peace with everyone. Do not take revenge, my friends, but leave room for God's wrath, for it is written: "It is mine to avenge; I will repay," says the Lord. On the contrary: "If your enemy is hungry, feed him; if he is thirsty, give him something to drink. In doing this, you will heap burning coals on his head." Do not be overcome by evil, but overcome evil with good (Romans 12:17-21) 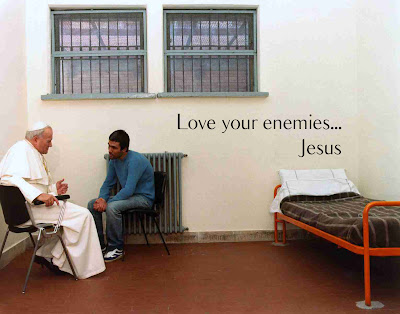 I think that no matter whether you are a Christian or not or whether you believe in Jesus or not, this is whole business about loving one another is pretty relevant in our world today because from what I see, all we as humans care about is bombing the hell out of each other just because they're different. In short, we freaking hate each other.
You have people wanting to blow up churches in Indonesia because they're not Muslims, countries attacking each other because some of them are terrorists, someone who is gay killing himself because of all the discrimination against him and people hating each other because of the skin color.
Even after so many years I still can't understand why people would have so much capacity to hate though. Take racism, for example. You could just solely judge someone to be rowdy, rude and unclean just solely based on his skin color even though you have never meet that person before. And based on your judgement, you immediately form a dislike to that person and your subsequent actions and words build on the initial dislike of this person and indirectly shows the person that you dislike him/her. Just imagine interacting with a Bangladeshi worker. I'm sure you would have actions like trying to stay away from him or closing your nose if he comes near to you.
And that's not even the worst of it. On the extreme end, you have people wanting to kill you just because you are of certain race or religion and that you pose certain type of "threat" to their society and life. The problem only problem? Threatening their "society" is the last thing on your mind. Heck, you don't even care about them. But still they want to bomb the hell out of you.
What do we gain by hating each other actually? How does it solve any problem?
Hate only generate more hate. Violence begets violence. It's a never ending vicious cycle. And where do we stop? Until everyone is dead?
Sometimes I wonder why is it so hard to just accept each other for who we are. We are humans after all and we have every right to be different. What's the point of society of if everyone acts and think in the same way? We are not robots you know. And it's our differences that makes us stronger. Everyone has their own strengths and weaknesses and no one is perfect in their own sense. Humans after all, function better together rather than going solo.
So come this Good Friday, instead of hating each other, why not embrace the diversity that all of us have? Sure, the guy opposite you might not agree with your way of life but what do you have to lose by letting him live out his own life and make his own choice?
From what I learned, loving the other person, accepting him/her for who he/she is the best way to defuse a conflict. And best of all not only can both of you become friends, none of you would be have to be blown up.
Sadly the people holding power doesn't seem to think in that way. They live on fear. They want you to be fearful and to hate the people from the opposite group. It is because of this people that we have so much hate going around. They are the ones that should be blown up.
But oh well... This is the sad reality of our world where hating rules and loving is not. Anyway, since today is Good Friday, I have a video to share! And it's called Follow Jesus on Twitter. The video is about what would have happened if Twitter existed during Jesus time. A very good watch. Ti then.
Labels: Life's Philosophies Love Matters Rantings Religion