The list of unfinished businesses I have now:
1. The power point for my upcoming talk for Youth.sg's Campus Spy session this Saturday. 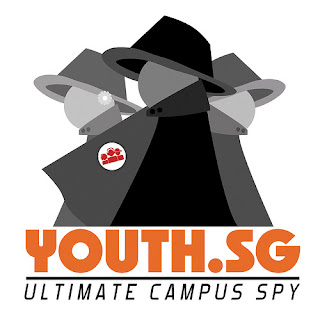 I have almost half done now but my brain seems to like to think itself into a dead end corner. If it doesn't get itself unstuck soon enough, I think I would just go on the stage and do a silly dance this Saturday and be forever known as the crazy dancing blogger. Or I could just pee in my pants.
Oh ideas please come to me. Not forgetting loads of courage too.
*****
2. Eusoff Hall Exposure Camp 2011.

Somehow I seem to forget about the responsibilities and work that follows when one decides to volunteer for something big, like being a co-head for the orientation committee. There's tons of proposals that I need to go through plus all the minor details that must be on my fingertips at all times. Not forgetting that my entire genetic sequence is made up of the L gene. The lazy gene.
And right now, I have to ensure that everything goes smoothly or heads will start rolling.
*****
3. Turf Belles Party
I have a party to attend tomorrow. One that has 20 pretty girls in it. One that came with an invite asking for hip guys to attend the party. The only problem? I'm no hip guy. Nerd guy, maybe but definitely not hip guy. What if I go to the party tomorrow and suddenly they decide that I'm not hip enough and ban me from entering?
*****
4. Cabinet swearing in 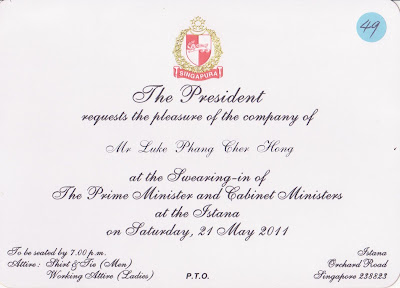 This is no party but still it came with an invite. From the President of Singapore. And it's gonna be at the istana. Meaning Castle.With lots of high ranking people and big shots too. And I'm just a small fry who loves to blog.

And there's the computer clean up that I must do before I officially hand over my job.