Living on campus along with loads of other people, particularly in a tight knitted hostel like Eusoff Hall in NUS have lots of benefits. One of it is the colorful life that you can experience in it, like Dance Productions, orientation camps, fun fairs and stuff of the like.
Of course, not all the events that I got to experience are on a scale that is as big as those mentioned above. Too much of big events are not good for your health either. Sometimes we just have a small outing to chill and de-stress. One of the said small outings is how during special occasions, we all get to go a special place to eat a special dinner which happens to be Uncle Muncheong's house!
Uncle Muncheong has always been a close friend to a number of people living in Eusoff Hall. Every year without fail, he will invite a small group of us for dinner at his house where he will cook loads of good food for us. 19th February, 2011 was no different. We again had the chance to sample the good food made especially my Uncle Muncheong and co. as a Chinese New Year celebration.
However, the journey to eat good food is not an easy one though. We had to cross some pretty tough terrains to get to his house, like having to pass through a jungle that is located behind his house. 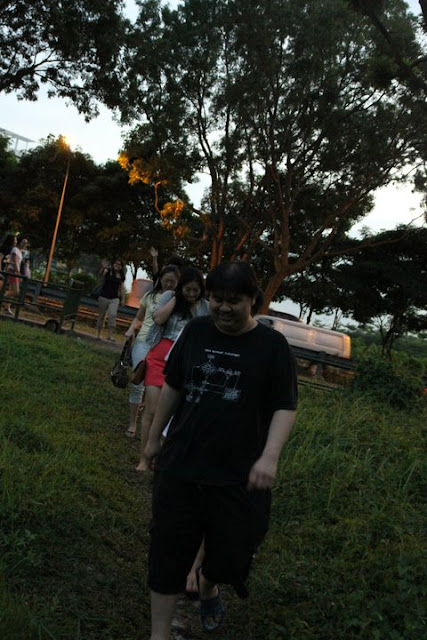 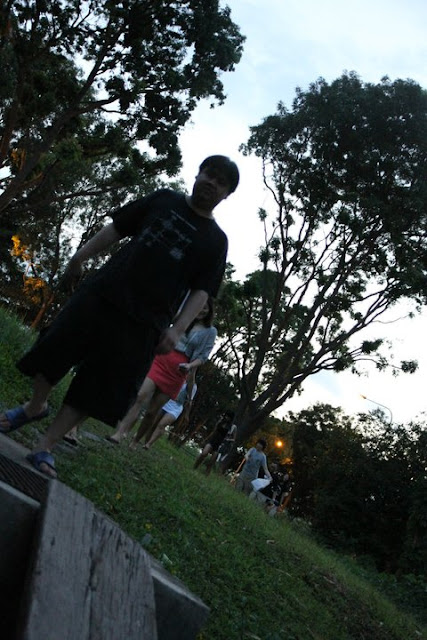 Okay, it was just a few patches of grasses but how often do you see those in Singapore right? The road itself was already creepy enough to begin with if you choose to cross it at dusk. Or maybe I was just being too cowardly.
But like all story goes, after a incredibly tough journey (for me, at least), our heroes finally arrived at their destination where good food awaits!
With the notion of celebrating Chinese New Year as the theme of the night, one of the must have food in the menu is the 'lou sang' or the literal translation meaning live mix!
But of course, the live mix is not the only good food we have for the night. Among the line up of good food in the menu includes:
And the chef special for the night, cat sashimi!
Whoops, sorry, I think I mixed up the pet section and the food section. That's Uncle Muncheong's pet cat, by the way.
Now that we're done with the food introduction, I'm sure you are hungry right? Time to dig in!
Besides the food, we also have the awesome people to spice up the dinner!
And we have three pretty Korean girls to joining the dinner for the night. I wonder if my face is handsome enough to attract them? People did say before that I look like Yae-yung... or was it Tae-tarik?
Too bad they're more interested in something more 'exotic' or special. Looking like Korean must have been normal, I guess. Which explains why Danny is more popular than me.
And so thus end another awesome dinner outing at Uncle Muncheong's! Everything from the food, mixing around and even playing with the pet was a blast. Except the part where I lost to Danny though. But still it was enjoyable experience. Can't wait for the next outing happening in April!
Labels: Friends Life Updates Pictures