23rd July 2011 was one of the big days in my life, that you could say. It was the sort of the day where one could say your life took a shift forward because something significant happened. For me, and also for this blog, it was the Singapore Blog Awards 2011, where lukeyishandsome.com was nominated as one of the finalists for the Best What The Hell blog category.

To be honest, I've been eyeing this event since the day I stepped into Singapore (in fact, I signed up last year, did not manage to make the cut though) and to be able to enter such a prestigious award in just my short 2 years in Singapore, I must say this is quite an accomplishment for me indeed. Not to mention that it's the perfect chance to show off :p

But of course, being a finalist is one thing, actually winning the award is another.

This year, the unveiling of the results and the prize presentation ceremony was held in Shanghai Dolly, Clarke Quay on a Saturday evening, which of course I had to attend if I want to know the results, so I caught my buddy Xian You to be my gay date for the event (despite the blog's name, I have a very hard time finding a female friend to accompany me, to be honest).

As both me and my gay date were quite poor, we had to take the bus rather than taxi to our location. And that means a lot of walking. But it's quite okay actually, because Clarke Quay has a lot of interesting sights along the way. We managed to catch a few sights while searching for Shanghai Dolly. An example that we saw was this:


But of course, it was Clarke Quay after all. What's a bar without its naughty name right? After some time walking, we finally found our destination for the day, Shanghai Dolly! And there was already a long queue by the time we arrived. No more early bird gift for us I guess.

I have to be honest, when I was reporting for the event at the counter, I was half expecting for the omy.sg (the event was organized by omy.sg, by the way) people to tell me that my name was not on the list and everything was a mistake. Blame the pessimistic paranoid me for that.

But thankfully, the pessimistic and paranoid me was wrong as usual. After registering and getting ourselves tagged, both me and Xian You were officially in the event that every blogger in Singapore hopes to attend, the Singapore Blog Awards 2011!

After settling ourselves down, it's time to proceed for the main item of the day, FOOD! 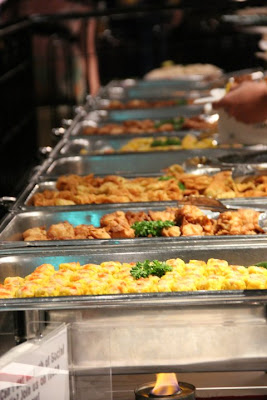 After we got ourselves a whole bunch of food to fill our stomach, we settled to the first item of the evening, an awesome performance by Shimona whom I guess Xian You totally loved (sadly) judging from his tweets. Guess my gay date found someone else already :(

But I have to admit her performance was pretty awesome though. Do check her Twitter out at http://twitter.com/#!/simplyshimona. She composes songs too! I especially liked her song about social media, which was totally so suited for the event. No wonder Xian You likes her.


After the opening performance by Shimona, the guest of honor for the day, Major General (NS) Chan Chung Sing (I still remember his famous speech during the election period. Didn't expect to have a chance to meet him live) was invited to give a speech and officially kickstart the event.

In his speech, the Major-General highlighted the importance of the blogosphere in the society today. He mentioned how opinions could be exchanged, discussed and disseminated through the use of blogs and encouraged more youths to take up blogging as a part time hobby. Heck, he even read some of the finalists' blogs before coming to this event. Too bad lukeyishandsome.com isn't one of them :(

After the speech, the award was first given out to the four sponsored categories of the Singapore Blog Awards, namely the Asus Best Tech Blog, HTC Best Mobile Blog, Adonis Best Beauty Blog and Deal.com.sg Best Shopping Blog.

I was one of the finalists for the Deal.com.sg Best Shopping Blog category, but due to my extremely busy schedule and my trip back to Malaysia, I only managed to come up with 3 paltry posts during the entire contest period. I guess I owe them an apology for that >.<

Anyways, back to the topic. Following immediately after the 4 sponsored awards category prize presentation was a sketch based on the day's theme, History Gets Social, about how history would have been if the social media had existed during that time. There was Hitler, Sir Stamford Raffles and even a "sexy" Cleopatra in the sketch. All of them was fighting to see who's the best blogger among them. Obviously they were not looking beyond the stage to see me sitting behind because the winner would have then been obvious. Just kidding.

And oh yeah, before I progress, guess who I manage to spot among the crowd?


Yeap, it's none other than Steven Lim himself! The guy that we all know so well thanks to his yellow underwear, make-you-wanna-pull-out-your-hair-singing-voice and even more narcissistic tendencies than the dear ol' Lukey himself (he thinks he's the handsomest guy in the world while I just think I'm handsome. See the difference?).

And to make the event more interesting, guess who got selected as one of the best dressed male for the night? Yes, guys, it's Steven Lim again!


Claiming to dress as Michael Jackson (I never knew Michael Jackson wore singlets), the Steven Lim himself managed to give us all audience a laugh when he was on stage. He even had the chance to give his signature kungfu-ala-IP-man pose during the catwalk. Better still, he even managed to send a Tiger beer bottle flying when asked to moonwalk. I guess that's pretty normal when he's around.


Unfortunately, he did not win the best dressed award, despite all his sexy poses and the moonwalk that included kicking a tiger beer around. Which is good thing for the rest of us guys, I guess, or else I would have changed my blog address to lukeyisnotashandsomeasstevellim.com.

Ops, I've digressed again. Steven Lim aside, it's time for the unveiling of the results. I must say, the competition this year is pretty tough from how I look at it. All of the finalist blogs are really good blogs to be honest, and in the category which I participated alone, it was pretty hard to determine who is the better one. Besides, there's this Aussie Pete who won the category last year so there was quite an overwhelming odds against me. But still, I hoped for the best. Who knows a miracle might happen and I might get called on stage as the Best WTH Blogger?

But no miracle happened that evening. Aussie Pete won the award again as the Best WTH Blogger.


Expected, but still I am disappointed. So disappointed that immediately after the result was announced, I ran outside and stood by the river, emo-ing.


Even the bird was emo together with me. I guess he's a blog reader of mine too.

Though the Singapore River was nearby and would have been a perfect place for me to be sad over the results, I did not. Being able to attend the event as one of the finalists is already an honor for me, given the fact there are so many more deserving blogs out there. Also, there was also great, free food provided. Not to mention there was free alcohol too! It's a bar after all, right?


Don't tell my parents this but I had 2 bottles of it. And man, was it awesome. The Tiger Crystal beer tastes a bit better than the normal beer somehow in ways I cannot explain. Not as bitter I guess, and definitely cooler. But heck, who cares as long as it's free alcohol.

The experience was great too. As far as I can see it, the blogosphere in Singapore is still pretty much alive and thriving. And though I did not win anything (not even the lucky draw section >.<) this year, like the emcee said there's always next year.

In this one year's time, I'm gonna try my best to make lukeyishandsome.com a bigger and better blog and hopefully next year, I would be able to join the awards again and hopefully x2, I would win something this time. That's my one year resolution.

But in the meantime, I would like to congratulate all winners for Singapore Blog Awards 2011 for winning this prestigious award. All of you are truly deserving of the award and to be honest, I am jealous of you all. But still, you guys rock. Congratulations again.


So I guess that concludes this year's Singapore Blog Awards then. But everything has not end though. Though no miracle took place that evening, I'm still hoping for another miracle related to this event to happen, which is a mystery gift to bloggers who blog about the event. So omy.sg, can this handsome blogger here at least win something like the mystery gift as a remembrance of the event? Please? Pretty handsome please?