iPad giveaway! Or not?

I'm blasting Linkin Park's Irisdescent and The Band Perry's If I Die Young for the past hour already. The rational part of my brain is screaming for me to go at least do something productive, like reading the unfinishable textbooks that are lying beside me, but the lazy part of my brain, which is much bigger in size and strength, is busy muffling the rational part out.
It's been 4 days since I last saw my beloved laptop and yes, i'm blogging using my XOOM again. I know i've been saying the same thing for the past 100 blog posts or so and if I continue, there would not be any readers left behind for my blog but who cares, rant I shall. Because taking away a laptop from a guy + blogger is just like taking away a milk bottle from a baby when he's busy drinking it. Of course he'll rant, cry and throw a tantrum. I'm throwing a tantrum by refusing to do work and ranting in my blog. (Not that i ever do work with my laptop present also)
Speaking of XOOM, it kinda reminds me of a thought that has been playing in my mind for quite some time now.
You see, before this XOOM came about, I used to have an iPad which I used to like very much too. But like they say, polygamy is never good so eventually I chose XOOM and my iPad has been ignored ever since. Which makes me feel bad of course, because if i'm never gonna touch the iPad anyway, I might as well give it out to someone who will treasure it better than me.
And that's where the thought comes in!
I was thinking of giving my poor ol' iPad away for free to someone who will treasure it better than me. The only problem is that the moment I said that, a lot of people said that they wanted it (who doesn't ), and I have no idea who should I give it too.
So I thought, to be fair, why not organize a blog contest to determine who gets the iPad? It will be exactly like how I got that iPad in the first place and it will be much more fun that way, because in a sense, you actually have to work for it and the person who win will be the one that truly deserves it. Fair and square. Besides it will also indirectly help to boost traffic to my blog too (hoho).
But here comes another problem. You see, whenever someone organizes a competition, the thing that they hate most is the lack of participation. You can have the grandest and biggest competition but without anyone to participate, the whole thing would be a failure too. What if Lukey organizes a blog giveaway and no one participates? That would be a total waste of time and also a major PR failure. Not to mention the possibility that you'll see the name of this blog changed to "Lukey Is Ignored.com".
So before I go anywhere or start the competition, I have to ensure that there will be people participating first. I'm not asking for a big number, just 15 people. If there's 15 people who are interested, I will organize a blog give away with an iPad as the main prize. And because the prize isn't exactly a big one, you don't have to do much like asking 100 friends to like your picture or something to win it. Just a simple blog post saying why you should win the iPad from lukeyishandsome.com is enough. And of course, at the end of the blog post just include a link back to my blog and Facebook page. Then just submit the blog post to me and that's it.
No need to ask for votes, no need to do crazy stuff, no need to even leave your computer. No word limit, no set format, only a link back to my blog and Facebook page. At most 15 to 45 minutes spent, depending on your writing style. Open to everyone who is staying in Singapore. Easy?
Now comes the important part; 15 people. How do I measure if there's 15 people who are interested?
Also simple. If you want the competition, just simply comment under this post, in Facebook or send me an email stating your interest. If i get 15 responses from 15 different people (15 responses by the same person don't count) by this Sunday, 11th September 2011 6pm, then I will post another blog post saying that the competition is on along with more details of what you need to do to win that iPad. No worries, the concept will not run from the one blog post task.
And to further convince you guys and girls that i'm not joking, i've included a picture of my neglected but still functional iPad (it's literally screaming for a new owner already) in this post. 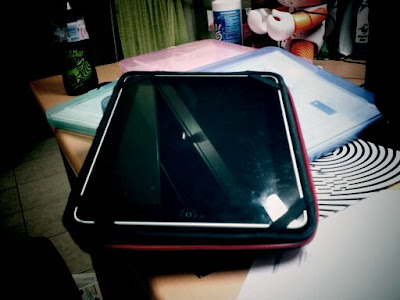 So yeah, start commenting if you're interested (you can ask your friends to comment too) and if there's at least 15 comments by this Sunday, 6pm, the competition to win an iPad is on! If there's not enough, oh well I guess I could frame it up and put somewhere as a memento. Hope to see favorable responses! *crosses fingers*
Labels: Competition Random