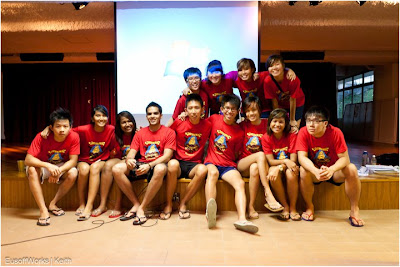 It's hard to believe that Eusoff's orientation is finally ending in less that 24 hours time. There's just too much stuff going inside me right now, of how I feel about this whole journey, what I think, what I experienced, how the entire orientation went that if I were to write it down in this blog post, J.K. Rowling's 700 pages of Harry Potter would look short compared to mine.
But to be honest, it has been a worthwhile experience all the while.
There might have been times when I doubted myself, when I felt like giving up (I have a tendency to be emo, you see, since I have a high neurotism trait) but there were also happy times when I felt that I was actually doing something of significance and when I shared laughter, jokes and stories with my fellow programmers. Besides, when I first decided that I am going to do this, I made a vow that no matter how bad or emo I might feel related to the orientation, I will not repeat the mistake that I did last year, which was distancing myself away, and to see the orientation through til the very end.
And see it through I did.
I admit that there's still room for improvement, that the orientation is not absolutely perfect and perhaps I would have done things slightly differently if I can go back in time, but what I'm sure is that there's none of the slightest feeling of regret in me for taking up this position as co-head of the EHOC programmes team.
In this short three months, I have learned a great deal of things, both about myself and also about loads of other stuff. I learned to be more responsible, to be more proactive and to be less temperamental as compared to how I used to be. To be honest, the experience during this short period of time has helped me grow very much and changed a lot of perceptions and mindset in me, which I am very thankful for because it has helped me to become a better person in general.
Not only that, I also got the chance to met a lot of awesome people during my experience in EHOC programmes. People who can crack lame jokes about virtually anything, people who has the best ideas of all for games and people who stay with you through thick and thin. And I am thankful for it too. Thankful for all the meaningful friendships that would have otherwise not formed if I had chosen to do things differently.
There might have been times when I lost faith, became discouraged and felt like giving up but looking at how the freshmen enjoyed themselves during the games today and at how we joked together during a McDonald's supper, there wasn't a single ounce of regret in me. Because this is exactly what I love to do. To organize events, to bond people and to experience as many different things as possible. And this is the exact reason why I sign up as a programmer again.
On one hand, it's sad to see that orientation is finally ending. I would surely miss all the meetings with different people, proposals writing and games testing. And most importantly, I would definitely miss my fellow programmers friends. But on the other hand, I feel happy to see that my baby, the whole orientation week itself, is turning out to be great and how the freshies are actually enjoying themselves, having fun and forming new friendships. Everytime I think of this, I just want to shed a tear or joy.
It has been a great three months. Perhaps one of the most memorable in my life. And it's finally coming to an end tomorrow. Be it rain or shine, when tomorrow comes, I am going to give it my best. I am going to shout like crazy, dance like crazy and do everything crazily. Because orientation is finally ending :(
Labels: Emo Eusoff Hall Rantings