A Story of Love, Excitement and Hub It!

Commercials are boring, that's what I think. Whenever I see a commercial playing anywhere, I would just switch my channels or go do other stuff because there's nothing interesting about commercials anyway. All they ever do is to sing some songs, dance some moves and show you some statistics (which you do not know if it's authentic to begin with) in an effort to make you buy the product. Which fails most of the time because the information only travels one way and we're only passive recipients in that matter. Boring. Given the name Love Tail, the campaign sees the return of Sparky, StarHub's favorite Jack Russell terrier in his quest to find true love. The story goes like this: One find day, he saw this really cute brown poodle that he really liked. It was love at first woof, you could say. But before he could do anything, she was gone, just like that. Poor Sparky couldn't just let it go, you know, because never in his life had he experience this kind of feeling before so he decided that no matter what, he needs to find her back.


The task wouldn't be an easy one though, god knows how many brown poodles there are in Singapore and that is the reason why Sparky's buddy, StarHub, has decided to help Sparky by utilizing the social media to help him find that cute poodle. (And of course, putting up some awesome rewards too at the same time).

Starting on on the 26th of August, Singapore residents everywhere would have the chance to take part in Sparky's journey and help him find his dream poodle. Not only that, you could also walk away with prizes like iPad 2, Macbook Air and Samsung 3D LCD TV if you happen to be the lucky person who manages to find Sparky's love.

The whole thing is very simple actually. So simple that I have decided to include a step by step guide on how to get started on your quest to find love and perhaps win the 10 000 dollars grand prize! So here goes:

1. Make sure your phone is a smart phone with a camera and runs on iOS or Android. If it's not smart, send it to more tuitions.

2. Download the Hub It! app for either the Apple Store or Android Market, depending on your device. This app is extremely important because all the things you need to do to win that $10 000 in cold hard cash is inside there.

3. Get hunting! Basically all you need to know is in the app and if you're still blur, maybe this video can help you a bit:

And of course, I'll be joining the hunt too! The 10 000 dollars is just too good to ignore. In fact, I was already in the game a few days ago to try and win the Blackberry Torch and Dell Streak (I lost by a few hundred taps, I guess). Don't worry though, it's just a warm up challenge by StarHub, the official competition starts on 26th, but a little head start wouldn't hurt right? Besides, I'm desperate for a new computer now.


So yeah, start downloading the app now and start hubbing! Who knows what great prizes you'll walk away with? You can also like StarHub's Facebook page here for daily clues about the cute poddle's whereabouts. Remember, the official contest starts tomorrow on the 26th! And like I said, this competition is awesome right? In fact, in the past few days a Blackberry Torch, a Dell Streak and a Samsung Galaxy Tab has been given away in the warm up challenges. And there's a lot more even more awesome prizes waiting when the competition starts. 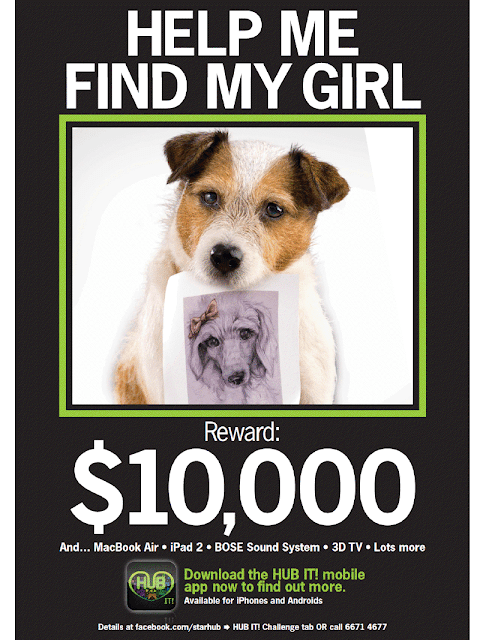