A good novel should never be adapted to movies. Especially 3D movies for the sake of profit. Because by the end of the day, you'll end up with a movie that tries very hard to accommodate too many things until you have no idea what the movie is trying to portray. At least that's what I felt when I watched final movie of the whole Harry Potter series, Harry Potter and the Deathly Hallows: Part II. 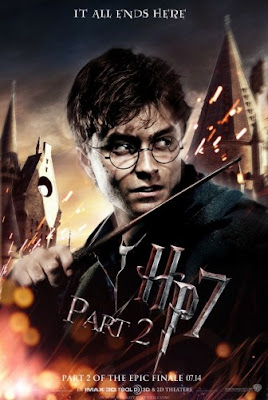 I think part of the reason I did not like the movie was because I am a book fan of the series. For starters, I find that there are many parts of the movie that do not stay true to the book and I suspect that they are just there for the 3D effects, which on my opinion is completely unnecessary and spoils the entire spirit of the story.
Take the final battle sequence between Harry Potter and Voldemort for example. The part where Harry took Voldemort on a jump and they both ended up flying quite intimately together trying to pull each other's face apart. Was that even necessary? That was no epic fight scene, it was not in the book and I can't help but suspect that the director only puts it there for the 3D flying effect. Not to mention that the entire 20 seconds of them flying together looks gay.
Also, the director also tries to put too many things in without giving a thought of linking them together to give a coherent story. One moment you find Harry fighting Voldemort and the other moment you find yourself watching Ginny's mother had a short fight with Bellatrix and next you have no idea where you are already.
It almost feels as if the director is trying too hard to fit all the events that he think is important in the book into the movie without giving much thought of making the scenes fit into the bigger picture. Those who never read the book before, for example, might be confused by the scene of Snape's flashback because everything feels too rushed and was not properly explained. Like I said, the director doesn't bother.
Also, I also can't help but feel that the fight scenes isn't as epic as I pictured it to be when I read the book. J.K Rowling surely did a better job than David Yates (the director) at portraying the intensity, suspense and excitement of the final fight scene at the school. I also felt that the whole movie was way darker than how the book was meant to be. Way too dark that it almost felt like I'm watching a thriller genre of movie.

And if you noticed, the director has also a tendency to put a lot of unnecessary noise in the background, be it a few dead wizards, some extras acting scared or a few extra stones in the movie which takes the attention away from what the main subject is doing. All these were glaringly obvious whenever Harry decides to walk around the school in the movie.


In short, I would say that Harry Potter is not a movie us book readers would enjoy because the director simply does not know which part of the book he should put in and which part he shouldn't (He included the "19 years later" sucky epilogue. And it looked way lamer than the book). Also, in the attempt to cram as much 3D effects into the movie (which is why I think 3D is really killing the movies), viewers end up with scenes with loads of effects that doesn't have much link to the story.

But still, the entire movie isn't that bad. Non-book readers may still find the movie interesting with all the effects and the epic fight scenes but for a book fan like me, the movie was so-so only. It did not exceed any expectations of mine and honestly, I still think the books are better. But then again, the movie is sort of a good way to end off your Harry Potter journey after all these years and to give a visual interpretation of the book.