Meme (noun): 1 : an idea, belief or belief system, or pattern of behavior that spreads throughout a culture either vertically by cultural inheritance (as by parents to children) or horizontally by cultural acquisition (as by peers, information media, and entertainment media)
Basically it just mean something that is famous and used over and over again until it becomes some sort of cultural symbol.

Many said it was one of the best Harry Potter movies of the entire series. The action sequences were great, the storyline was true to the book and the acting was superb, particularly the acting by Ralph Fiennes, or better known as he-who-should-not-be-named, the entire reason why there was a Harry Potter in the first place. 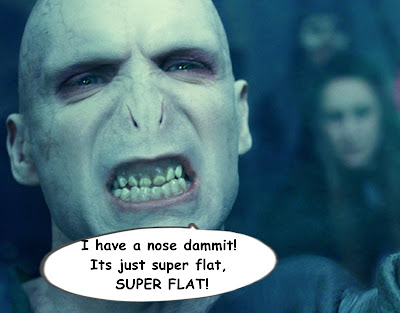 And what better way to give our dear Lord Voldemort a tribute than to turn him into not one, but two everlasting memes based on his final act in Harry Potter: The Deathly Hallows Part II?

But oh well, what other way to end off your final performance as one of the most hated villains than to go off with a bang or in other words, EH HEH HEH HEH.
Labels: Online World Parody Random Talk Cock