In her whole six minute speech, she talked about loads of stuff, likening her faculty to Hogwarts, thanking the professors and talking about how life was as a undergraduate in NTU. And as you can see from the video, her speech struck a common chord with the audience. They applauded, they laughed, they thought that the speech was great. It's only at the end that she uttered the word "F*ck". And it was not even used to scold the lecturers or to be rude. She used it as an expression to culminate her entire journey in NTU. "We f*cking did it". That was all. There were no gasps of horror from the crowd. Instead, people cheered her on. 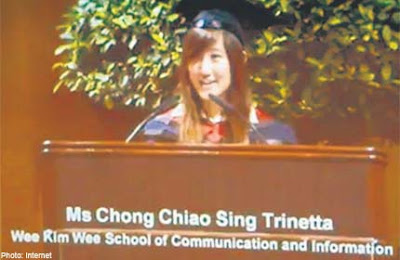 But still, some very "righteous moral protectors" were outraged by the use of the "F*ck" word in her speech. They chose to focus on that really tiny part of her speech rather than looking at the entire speech as whole. To them, it's as if the slightest mention of the word would bring great calamity to the world and that you're a crude person by even daring to mouth the word. Sort of reminds me of the story of Harry Potter where you cannot say the name Voldermort and must use the phrase "he-who-must-not-be-named" instead, except that in this case it's the "word-that-shall-not-be-uttered-in-Singapore-because-we-have-loads-of-anal-people-here". Just take a look at the comments I found in response to Miss Trinetta's speech: 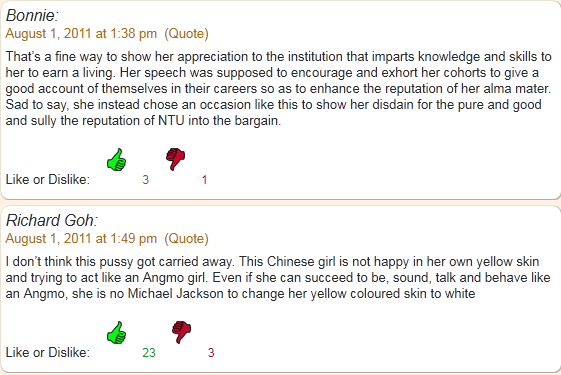 I mean, what's the big deal anyway? Why make an issue out of it? Sure, it might have been inappropriate for her to say F*ck in a formal ceremony but hey, old people, in our generation the word F*ck is used generally as a figure of speech. Just like how we don't mean we will jump off the building every time we say something like "hot til want to die", we don't literally want to f*ck you everytime we say the word. It's just a way we express ourselves nowadays because there's just so many meanings to that word.

I for one, personally think that a word is neutral on its own. It's the meaning we attach to it that makes it either good or bad and I'm sure that when Trinetta delivered her speech on that day, she did not intend it to be offensive or rude in any way. It was the "righteous" people that think it is a rude word because all they can think about are sexual stuff whenever the F-word is mentioned. It's not Trinetta that needs to apologize, but it's this group of dirty-close-minded people.

Thankfully, nothing serious came out of this incident and the school itself decided to not pursue it any further. Also, there were even some employers like Pat Law (founder of GOODSTUPH) who tweeted that she wants to hire Trinetta, despite how some netizens said that the f-word would forever tarnish  her career prospects. If you ask me, I would rather not work for an employer who hire people based on whether they use f-word or not too because they would be those employers that would screw you for the smallest things possible, like wearing different coloured socks to work.

Besides, another things that confuses me is that out of so many issues in the world like hunger, poverty and war, why would some people choose to focus on whether someone said the f-word during a convocation speech instead. Time to let go and move on with life people.
Labels: Online World Rantings Singapore