If you've been keep up to date with the Malaysian news, you would have know that there have been a lot of controversy recently surrounding the colour yellow and the word Bersih because one of the biggest movement demanding clean elections in Malaysia, involving the opposition parties and numerous NGOs, decided to call their movement Bersih 2.0 and adopt yellow as their official colour. 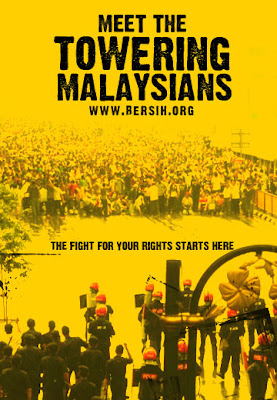 To be honest, I did not pay a lot of attention to the entire Bersih 2.0 movement at first because I thought that like all anti-government rallies in Malaysia, it will either get silenced before it even starts or either the entire event will fail because no Malaysians will dare to turn up. Believe me when I say that many Malaysians most of the time will only complain about the unfairness and corruption in Malaysia but are too afraid to do anything about it.
I have friends who before Bersih, talked about how unequal the government is treating Malaysians, how bad the situation of the country is and basically complain about wanting a change in Malaysia but when I ask them what are they doing for Bersih, they looked at me as if I have asked whether they could jump off a building. Sentences such as "Don't want to get arrested", "Lazy", "Stay at home better", "No use one lah" were among the reasons given for not attending the rally, so yeah, basically I did not think that the Bersih 2.0 will hit its 100 000 expected turnout because most of the time us Malaysians are like NATO, No Action, Talk Only.
Other than that, I was also skeptical on whether Bersih 2.0 would make any changes or not because being able to rally is one thing, having your demands met after that is another. For all I know, the government will just let the protesters gather, fire some tear gas to give an element of excitement to the rally and then everything returns to normal come Monday. Everyone goes back to their normal life and the government will pretend that nothing happened and continue to abuse their power. Because they know we cannot gather everyday to demand for changes. It's like a once in a blue moon thing.
We Malaysians have not yet reach a stage or the threshold where we are ready to abandon our jobs, our family and even our lives for the sake of justice yet. It'll be a long way before Malaysians can achieve anything of the Middle East scale. A long long way.
So yeah, like any protests in Malaysia, I did not put in a lot of hopes on Bersih 2.0 achieving anything worthwhile or concrete at the beginning for 2 reasons. One, because of the lack of support and two, because the government would act as if nothing happened anyway. They're too high up to listen to our demands and grievances.
However, post-Bersih 2.0, as the pictures, videos and news began to pour in, my perceptions began to change. Seeing so many people, thousands of them, made up of every race, religion, age and gender, united for the same cause, I think Bersih 2.0 might not be a lost cause after.
Although I still think that Bersih 2.0 would not be able to meet the changes it seek, which is electoral reforms, the entire movement on itself could be the start of something bigger that it is to come. For the first time, through Facebook, Youtube, Twitter and Blogs, Malaysians got to see the works of an oppressive government without the censorship of the government controlled media. Malaysians were able to witness how the policed act brutally, firing tear gas and water cannon against peaceful protesters and also how each and every protester, no matter race nor religion fought for the same thing.
I think that how the entire movement was captured in the social media scene is one of the best anti-government publicity campaign ever. It helped to spread awareness about our rights as citizens helped those who have always thought that our Malaysian government was all loving and kind to witness the true face of them.
So yeah, I think this is the start of something bigger in the future, seeing how the entire campaign was mobilized both offline and online and perhaps in the future one day, the long awaited change will finally take place.
P/s: This video gave me the goosebumps
Labels: Malaysia Politics Rantings