Light Is No More The Fastest

Scientists found out that there's something that can move faster than the speed of light today. It's a neutrino fired at CERN or something. I dunno. It sure got the science world abuzz with the this latest discovery. I'm sure light is pretty sad now that it's not the fastest moving thing in the whole wide universe anymore now that a neutrino beat him by a mere 60 nano seconds in speed. 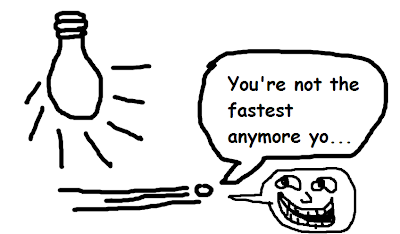 Other implications from the fact that light is no more the fastest:
1. "Traveling faster than the speed of light" is not a cool sentence anymore
2. Einstein finally got something wrong in his formula!
3. The past few years of studying science has been wasted because what you studied cannot be applied anymore. And teachers and textbook publishers alike will curse at the researchers for the impending change in the syllabus
4. Barney for How I Met You Mother will now have a new pick up line. "Hey, you heard about light not being the fastest anymore? Yeah, I beat him in running"
5. Now scientists need to squeeze their brains for juice to figure out how to build more sophisticated tools to measure stuff that travels faster than the speed of light
6. If you travel faster than light? Does it make you go back or go to forward in time?
7. It makes you blog pretty lame stuff about what are the ramifications of something traveling faster than the speed of light are
Labels: Random Talk Cock