It was called X6 because it took 6 months

It took them six months. That's 120+ days to get a phone ready for collection. Maybe the factory ran out of stock. Or there were too much procedures to clear. Or somebody has not been doing their job, I dunno.
But when the email finally came, I could hear it calling to me already. The long awaited X6 phone that I won it once upon a time from a Nuffnang competition. To be honest, I had pretty much given up hope on seeing the phone already, since it has been so long without any news, but well, like they say it's better late than never. 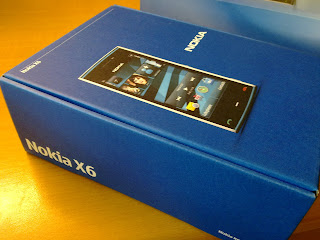 Of course, the competition did not include the shipping fees so I had to practically go down to Nuffnang office to collect the phone myself. So different from the time when I won an iPad and iPod shuffle from Exabytes and Standard Chartered Bank respectively, where the prizes were directly delivered to the place I'm staying.
But oh well, I'm not complaining. I would personally want to take a look at the office of the blogging company which played a big role throughout my blogging life and see how they really do things and be able to manage the enormous amount of bloggers under their wing.
To my surprise, instead of a big 10 storey office building with hundred of workers that I was expecting, Nuffnang turns out to be quite the opposite instead. The office was relatively small compared to the thousands of bloggers Nuffnang has under its wings, with a chillax working environment. No cubicles or dull painting you would expect from an office. Instead, Nuffnang's office looked more like a home than an office, and there's even a pet dog inside it!
And of course, being the easily nervous and introverted me, I forgot to take any pictures inside the office. In fact, I did not even spend more than 5 minutes inside Nuffnang too. Fail. I wonder what would have happen if I asked all the pretty girls (Oh and did I mentioned that almost everyone working in Nuffnang was a chio bu? It means pretty girl in hokkien/Singlish) to take a picture with me? Oh well, I guess that have to wait til next time, if I happen to win something from Nuffnang again.
The experience in Nuffnang's office taught me that you don't necessarily have to be big to be influential. Even with a small team, as long as you're dedicated and creative enough, you could make waves.
Anyways, Nuffnang's office size aside, I think the next best thing to do is to officially conduct a farewell ceremony to my good ol' N79 that has dutifully served me for 2 years already.
To my good friend N79, thanks for helping me to send all those countless sms, make calls, take pictures and doing everything a phone can do throughout all these years. Although you were not the best phone ever, you suck at taking pictures by the way, you still played an important role in my life. Besides, you were a product of my sweat and tears, I had to work six full months to get you, which is why I treasured you really much.
But like all electronic products, there will be a time where we need to part ways in light of the ever fast changing pace of the technological world. I have no choice to keep up with the trends or being left behind clueless, which is why I am switching over to a new phone now. And the phone is free too!
No worries though, I won't be selling you away like what I did to my K810i last time. I regretted the decision ever since and don't laugh at me, but I have a little dream to collect very phone that I've used before in my life as a memorabilia. And I could use you for my Malaysian number too.
And for the time being I will be using the brand new X6 as my primary phone. No point not using a free stuff right? And besides, showing off is never easier.
Next up, I'm gonna win an iPhone!
P/s: Many thanks to Nuffnang and Nokia for the new phone!
Labels: Blogging Competition Life Updates