Never ever bring a bulky bag to a government function or important events because everyone will look at you in a "Is there a bomb inside that bag?" way. Well, at least that's what happened to me when I attended the recent cabinet swearing in ceremony on the 21st of May, 2011 (the day the world was supposed to end, according to one Harold Camping, which it didn't) at the istana.
But I guess I must be one of the few lucky ones (not to mention one of the youngest too) in Singapore who had the chance to attend such a prestigious and important event like this. After all, it only happens once every four to five years when elections come and if you have been keeping up with the news lately, the recent election has been one of the historical ones due to the high swing of votes to the opposition. Not only that, the new cabinet has also gone through quite a bit of reshuffling so yeah, this is one special cabinet swearing in ceremony indeed and I have Youth.sg to thank for giving me this wonderful opportunity. Most of my friends had their jaws dropped when I showed them the invitation card from the istana (proud).
To be honest, during the whole event, I can't help but feel as if I'm James Bond (or Johnny English, due to my blurness) on some spy mission. The police checks, the number of important people having important discussions around me (I managed to overheard it due to me being incredibly quiet during the whole ceremony, acting as if I'm on an important mission out to learn secrets from the people there) and the grandness of the istana , all seems to be lifted out from some spy fiction movie. I need to stop watching all these spy movies on weekend.
Aside from the Johnny English feel, I also can't help but to feel awed and humbled too. Imagine being one of the incoming cabinet ministers taking up oath that day, swearing to uphold the country's constitution and to serve her best interest, that's a lot of responsibilities as far as I know. I, personally cannot do that. I would faint on the spot if it were to be me taking the oath. The stress and responsibility involved was just too big and I secretly salute all the incoming ministers for having the courage to step out to lead the country.
It's not easy leading the country, you know. In our modern age today, nothing escapes the eyes of the citizen and if people find you to be unworthy, you'll feel the heat. Which is why I prefer to avoid rather than taking up something like this. It's just too big a responsibility for me to fanthom.
Also, I was also pretty much amazed by PM Lee's speech. Perhaps I have not really paid attention before but being there hearing him speak in three languages, that's pretty awesome. From where I came from, politicians wouldn't really bother much if you do not understand what they speak. There's subtitles anyway so why should they care?
Now, a PM that speaks in all three languages, that's sincere. It proves that he's trying to reach out to everyone, not just a specific group. It's a shame that there was no Hindi or Tamil version though. If PM Lee had done that, I think I would have stood and applauded him.
In his message, the prime minister stressed for a unified Singapore now that elections are over and he also assured Singaporeans that the government has received the message from the election and promised to listen and do their best to address the woes of the people. 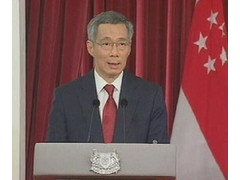 And after the speech, we had food, istana style! And by istana style I mean huge amounts of delicious food, separated into loads of categories (Chinese, International, Malay and deserts!) which even with an empty stomach (I purposely skipped lunch for this, just kidding) I cannot manage to sample everything. And they even have people serving you drinks. Reminds me of those high class buffet I normally see in Hollywood movies.
In short, this whole cabinet swearing in ceremony was an eye opener for me. I got a better grasp at understanding the significance of such events and also the responsibilities the ministers hold (I will never look down on them ever again). Not to mention the real good food. I've gotta attend more events like this, honestly.
Labels: Life Updates