The Day I Went On A Date

Dear bloggie,
Today was a fun day. I think it was because I went out on a date today. It's been a while since I last went on a proper date and I must say that I'm quite thrilled today when the girl I asked out said okay. Back in Singapore, when I asked a girl for a date, she would come out with all sort of excuses like work, study and even period when I asked. I guess I'm just not hot enough by Singaporean standards. But that's not the point. Lets return to the story, shall we?
For our first activity today, we went and watched Kungfu Panda 2. The movie where I have been hearing from others about how good it is all over my Facebook wall. So I decided to give it a try myself and of course, for a date, watching funny movie is always a killer move. 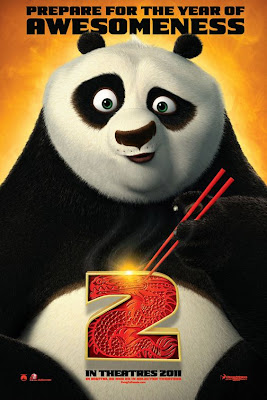 Due to the bad timing of the 2D English version and the Cantonese version selling out (yes, we have the Cantonese version here in Ipoh, which is why Ipoh rocks, sort of) we ended up buying the 3D version tickets. Which wasn't such a bad idea because now the subtitles now look much closer to me. And also I feel that the 3D effects make the movie look much more real and polished. Sadly, due to the process of habituation, I grew accustomed to the 3D effects and the "wow" factor gradually diminished as the movie progressed.
Overall, maybe due to my overly high expectations perhaps, I find the movie to be a little lacking in terms of the plot buildup and storyline.
Sure, I mean the movie is still funny with Po, his carelessness, Jack Black and also the jokes here and there but other than that, I did not find other parts of the movie quite as appealing as the first movie.
Firstly, you have the weak plot buildup. For this movie, on my opinion, the conflict and the threat was not portrayed in a way that would make the audience sitting on the edge of their seats. Everything feels rushed, from the starting to the end of the movie. Bad guys come, Po goes to save the day, Po fails the first time, some screw up happens, he finds himself and then he manages to save to the day. It feels as if the director just wants to make a few important points here and there without really dwelling into the conflict more. And the entire thing feels very linear without much twist to it.
Watching this movie, I did not get the feeling of excitement like I did during the first movie when Po finally realized his true potential and rushes off to defend his beloved valley from the... erm... leopard? In this movie, the connection just wasn't there. Even during the emo scenes where I'm supposed to feel sad, well I feel nothing. It's more like "Ok lo" to me.
But of course, there are some points that I do like about this movie. The way of how they linked Po's past to this movie and his geese father was brilliant. It finally answered some questions that I had during the first movie onwards. The way they used cartoon to illustrate was also cute and nice.
And then there's the hint of romance between Tigress and Po. Perhaps an inter species romance when Kung Fu Panda 3 returns?
In short, Kung Fu Panda 2 stopped short of my expectations. I would give it a 6/10 if I only watched the movie but because I'll give it a 7/10 because of this: 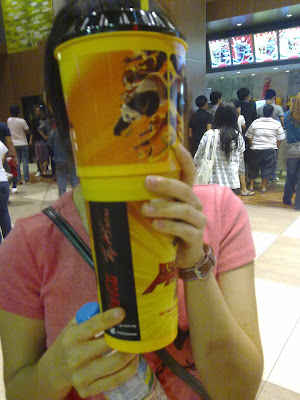 They call it the Tumbo while I call it the 2-in-1 ultimate cinema experience. And 2 in 1 is because for the first time in my cinema experience, I can now eat popcorn and drink Coke from the same container. Yeap, the awesomness of the Tumbo is that the top part of the thing is to store popcorn while the lower part is for drinks. So now you can eat and drink from the same place! And for this invention I give a 7/10 rating.
After the movie, the next thing to do is of course a dinner, and for dinner we went to a newly opened Korean BBQ restaurant.
The thing about this restaurant is that you can only eat there once per year. Not because it only open once a year but because you need an entire year's saving to be able to enjoy a good meal inside. At least for a student with no money like me.
Though the pricing may be a little expensive, the ambiance inside is actually quite classy and really have that Korean feel to it. You need to sit on the floor for example and they prepare the food in front of you, for dishes that need to be BBQ, that is. And they have 20 appetizers free for you. 10! I was saying that to save money, we should all just go in, order 1 dish and spam the appetizers. It's refillable too. So you can eat on and on on the appetizers.
Some pictures from inside the restaurant:
And that's all for my dating day bloggie. And honestly? I had fun. Maybe I should do this more often. Once a year perhaps if I were to consider the Korean restaurant.
Labels: Life Updates Rantings