I'm feeling a bit lazy today so I'm not gonna write an epic long post like what I did yesterday. Besides, although I made a vow of updating my blog everyday, I realized that posting epic long posts everyday ain't gonna make more readers come to your blog. It will just become something like an information overload (or rather lame blog posts overload), not everyone will read it and I will just be wasting my creative juice. No worries, I am still gonna post everyday but just aim to slip in an epic post maybe once per week or once every two days.
And yes, that's the lazy gene inside me speaking.
As for today, I'm gonna blog about a movie I watched just now. A movie involving mutants with awesome superpowers, called X-Men: First Class. 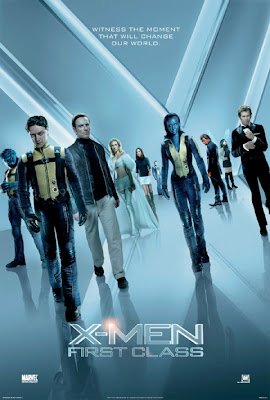 For someone who sort of (I say sort off because I never really sat down and watch it, I just happened to be around when my father was watching it) watched X-Men 1, 2 and 3 (but did not watch Wolverine Origins, I know, I'm missing out on many things), I would say that X-Men First Class is one of the better movies among those three, in storyline, action and also Professor X, and I enjoyed it really much, especially for an X-Men fan like me. Read on to know why but beware of possible spoiler alerts ahead. Or you could just jump to the last sentence straight away.
Firstly, I like how everything connects to rest of the bigger picture of the X-Men universe. How the mutants struggle started and how everyone came to be who they be. Even Magneto's hat's origin was mentioned in the movie. Everything that you have seen in the past three movies, every small detail, was touched in this movie, even a three second cameo appearance by Hugh Jackman to illustrate Wolverine was included. Not forgetting Storm as a white haired girl too in the younger Charles Xavier scan to find mutants. If you're an X-Men fan like me, you'd be going "Oh, I've seen that before!" and "No wonder that happened in that movie" the entire time.
Secondly, I also like how the plot develops. It is not too draggy nor too fast paced for the audience to stomach. It develops at a comfortable speed, I could say. It leaves enough time for you to ponder about the events in the movie without making you feel bored or confused about why things are happening. And it was very successful in making me grab the edge of my seat and bite my fingers a few times because of the excitement and suspense of that scene. Not many movies can do that to me.
Thirdly, the movie also illustrates the conflict between the two sides of the mutant beautifully. And how the movie manages to balance the two opposing viewpoints of Professor X and Magneto without being two biased to either side. It does it so well that by the time Magneto was asking the mutants to join him, I was torn between accepting his argument and Professor X's idea of peace.
And I liked the messages that the movie is trying portray very much. The notion of accepting ourselves as who we are although we may be different and refrain from bowing to the pressures of society; the consequences of prejudice and stereotypes; our stubborn refusal to accept people who are different that us and the question between what's right and what's wrong in our world today. All which is quite relevant to our daily life. Stereotypes, racism, discrimination and prejudice are undeniably part of or daily lives. Perhaps this movie will get people thinking from the side of the oppressed and to realize that we are not that different after all, despite what may seem different on our outside.
Like Donald Miller (a writer I respect) and many psychologists have found out, we have this innate tendency to stereotype and discriminate. It's inescapable from our nature. I mean when was the last time you have looked down on a Bangladeshi worker, labeling him as someone who you should stay away from? Not very long ago, I suppose. What we do not know is that how much harm all our stereotypes can cause to the people on the receiving end. Maybe it's time to stop lumping a group of people as whole, sharing the same features (eg dirty, criminals, useless) and start treating them as individuals with distinct personalities instead?
And finally, I also like the movie very much because I can really connect to the people in the movie. You see, you may not know this but I'm a mutant myself, just like the X-Men, which is why I connected with them. Know what'smy power? The power of extreme handsomeness.
Labels: Movies Rantings