"In brightest day, in blackest night,
No evil shall escape my sight
Let those who worship evil's might,
Beware my power... Green Lantern's light!" 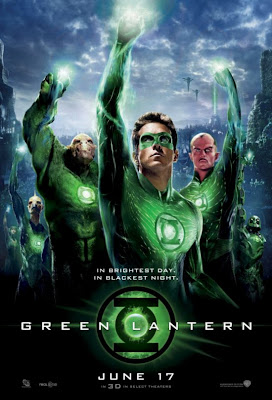 When I attended the preview screening of Green Lantern today, I went in not expecting much from the movie. I mean sure, the trailer looked pretty epic alright, and there's tons of publicity efforts here and there, but looking at the trailer, I half expected the movie to have the standard superhero movie storyline. You know, hero was a normal guy with problems - hero gets bestowed by an incredible power one day - hero gets cocky - hero gets defeated for the first time - hero doubts himself - hero's everything gets threatened - hero unlocks his true power - hero saves the world.
Which can get pretty boring over time if you happened to watch tons of other movie with the same type of plot, so I did not hope much in fears of having my high expectations crumble to the ground, like how it did during the screening of I Am Number Four. I'm still having nightmares of the number 4 til today thanks to that movie.
However, for a movie that follows a much expected plot and storyline, I find the movie to be quite enjoyable. A 7/10 rating, if you would ask me.
Firstly, the casting of the movie was superb. Ryan Reynolds was able to deliver the role of the cocky but yet have inner conflict hero convincingly, something that not every actor can do, because most of the time, one would end up on either one extreme, being too cocky or too conflicted. Besides, Reynolds was also smoking hot, much hotter than me, I suspect because the girl watching the movie with me cannot stop commenting on how handsome he is.

Of course, Blake Lively as Carol Ferris,  Green Lantern's love interest, was also another gem in the movie. Not only she's smoking hot as Reynolds, you also can feel the chemistry going between them. The rest of the cast was also very good. The only problem I have with the casting was with Peter Sarsgaard who plays the role of Hector Hammond, the human antagonist in the movie. Somehow he just gives me the feeling of being blur the whole time and not evil enough. The movie also tries to portray him as someone with loads of conflict but he just could not deliver it. My only feeling towards him was wanting him to just die and let the show go on.

Other than that, I also like the epic-ness of the movie. I guess it has to do with the Green Lantern Corps being an intergalactic peacekeeping force. Everything in the movie was universe scale like. There's this opening dog fight (as in the jet fighters dog fight, not the literal dog fight) between Hal Jordan (Ryan Reynolds) and Carol Ferris with two AI jet fighters, the introductory scene of the Planet Oa (Green Lantern Corps' Home Planet) and the final battle scene between one small human Green Lantern with a planet eating enemy that will make you go 'Wow'. Even the final scene where Hal kissed with Carol was nothing short of epic-ness, with a setting sun as the background. Prepared to be awed when you watching this movie.

Despite the epic-ness of the movie, little details was also not forgotten. There are witty one liners scattered throughout the movie that keeps you interested in the movie and also to provide you with a comedy side to an otherwise serious movie.

Also, the movie also has a pretty good message to it, though it may be a little bit cliche. It tells of a story of someone who struggles to not feel fear, because that is what is required of him, but to find that by the end of the day, it is okay for us to all feel fear, to doubt ourselves, because we are human after all. What matters is to not give up hope and to be courageous in spite of everything that seems to go against you. The key is not walking away.

In short, watching Green Lantern reminded me of watching the first Spiderman movie, except everything was on a much bigger scale and the female lead was much hotter this time. If you're a fan of superhero and epic movies, this is a movie for you. It's epic, funny and exciting at the same time. A must watch.
Labels: Movies