An important event (at least for people who call themselves social media addict like me) took place in Singapore yesterday . Known as Singapore's Social Media Day or SGSMD in short, as we all like abbreviations, or by the tag word SoMe!, the event was to celebrate the rise of the power of social media in our world today and also for the social media addicts; bloggers, Tweeters (how do you call people who Tweets a lot anyway?) and Facebookers alike to help raised fund for charity. 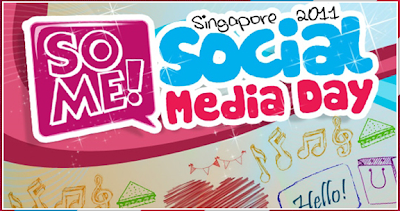 The event was inspired by Mashable's World Social Media Day which was held on the exact same day (30th June) in 2010 and it was jointly organized by a group of bloggers, who are quite prominent, with the support of Omy.sg, the online bilingual Singapore newspaper which is also part of SPH (Singapore News Holding), meaning that this is quite a big event, at least in the social media sense.

Which is why for someone who has the sentence "Be a famous blogger by 30" on his wish list, the event would be a great opportunity to further bring his blogging hobby to a greater height. Not only he could meet fellow bloggers and important people there, he could also learn about tricks about blogging and about the Singapore blogosphere too.

Not only that, happening at the same time was another event too for bloggers, called the Waterfront Feast, a competition also organized by Om.sg in which the said guy with the "Be a famous blogger by 30" wish got invited too to participate. It would also be another great opportunity for him to network, learn and grow in his blogging journey.

But instead of going to any of the above event, which will benefit him greatly as a blogger, he chose instead to head to JB for a day off with friends. He missed two opportunities in one day. Two. Which is quite a waste actually, because events like this do not usually drop out of sky and everytime you decline an opportunity like this, the chances of another one coming your way is quite slim, given your record of consistently declining chances like this.

One thing is certain though, this said blogger must start to get rid of his persistent habit of avoiding social functions or events where he needs to meet a lot of new people just because he's afraid of it. Or he can stay in hims comfort zone forever because this world is ain't gonna give chances to someone who doesn't even have faith in himself. For all his talk about himself being handsome, deep down inside, this guy has a confidence of a rat.

However, I think it is time to ask for me to throw all these self doubt, shame, shyness, fear and nervousness away because when you're too busy worrying about how others think about you, you would not have the courage to try something new and to step out of your comfort zone. It might feel safe where you are now alright, but you ain't gonna go nowhere if you continue to stay on the spot.

So no more missed opportunities and no more regrets, the next time something like this passes me by, I'm gonna force myself to take a leap of faith into the unknown. And just talking about this made me nervous already. I still have a long way to go.