Thanks to Youth.sg, I had the chance to catch the preview screening of the movie Beastly starring Alex Pettyfer (I Am Number 4) and Vanessa Hudgens (please, who doesn't know her?) before it's official release in Singapore on the 12th of May. Directed by Daniel Barnz (Phoebe In Wonderland), Beastly is the modern take of the classic Beauty and the Beast story where an arrogant handsome guy, one who prides his looks above all else, gets cursed to become something hideous and must find someone to love him despite his looks or stay like that forever. 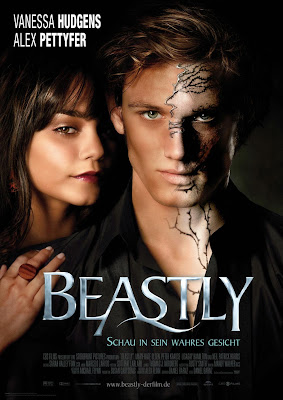 For a formula that is time tested and sure to sell (couples, especially, love movies with themes like this), Beastly is just... beastly. Like Kyle (Alex Pettyfer) before he turned ugly, this movie may look nice on the outside with all the publicity and visual effects but when it comes to the inside; the plot, acting and everything else, it is really shallow and empty, despite the efforts by the movie to look deep and intelligent.
For starters, the plot is everywhere. There is no clear link between the main points of the story, like how Kyle pissed off the "witch" and how he became ugly. The impact of the incident was negligible at best for me. One cannot really feel the witch getting hurt or humiliated but it was more like, "Oh, ok, I think you teased me so I'm just gonna curse you." And the next thing you know he was ugly. There was no thunder flashing, no dramatic change of events or any real conflict involved. It was just like kindergarten kids fighting.
Also, the film fails at making audience feel part of it. I know I'm supposed to be sad when Kyle's father rejected him for his looks but somehow, I just don't feel anything. Maybe it's because of the acting or maybe it's because of the script but throughout the film, you cannot help it but feel that the film is kinda forced. Is as if that no matter what, a few important events, like how the girl must stay with the guy, must be in the film to make the story going and in the end , you have poor linkages between the main points and a storyline that seem pretty fake. Which explains why one can't feel anything. Because there's nothing to feel.
Lastly, the chemistry is just not there. For a love story to succeed, the audience must really feel the attraction going on between the two main characters, to take their role and to live through their eyes, to feel the love between the two. That's why I loved High School Musical but sadly, for 99% of the movie, it felt as is they were just mutual friends and they had no choice but to fall for each other because the script says so. The director did not allow sufficient time for the love to blossom and like I said, the whole thing feels forced. Even the relationship. Maybe it's because Vanessa Hudgens still loved Zac Efron. Or maybe it's because Alex Pettyfer just sucks at acting, despite his good looks.
To top it all off, the whole movie is full of cliches. This whole "substance over style" debate that this movie seem to be debating about is full of old quotes and references from other movie. One can't help but wonder if the director used the copy and paste function for movies. It feels oddly unnatural and unoriginal when you try to stuff too many cliches in to try and make your movie feel deep..
But despite all the shortcomings in the movie, there are still some plus points in it. One of it would be the appearance of Neil Patrick Harris as Kyle's blind "home tutor" (I still don't understand why the director would want to put a tutor in since for the whole movie he did not really tutored anything except how to chase girls). For How I Met Your Mother's fans, you would remember him as Barney, the desperate for sex guy.
If it's not for him, I could safely say the movie is devoid of emotions. He added a few laughs here and there with his classic Barney attitude about girls but then again, although you're laughing, you can help but wonder if he has crossed into the wrong movie. And even the great Barney Stinson was not able to save the movie.
In short, I think the 17% rating of the movie given by Rotten Tomatoes is a worth one. Devoid of plot, chemistry and emotion, it's better not to expect anything from the movie. And it's definitely not worth paying your money for. The original Disney's Beauty and the Beast was so much better than this. I would give it a 2/10 and the 2 came from characters like the tutor and Kyle's maid.
Labels: Movies