PAS Malaysia to Catholic Archbishop of Singapore: "Hey, we're not that different after all!" 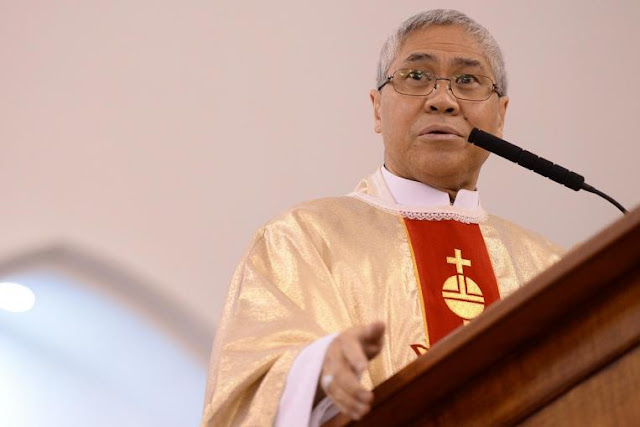 Okay, they didn't really say that. But I would imagine them telling Archbishop William Goh's message on Madonna's upcoming concert in Singapore. He said that it is the Catholics' "moral obligation not to support those who denigrate and insult religion" and that "there is no neutrality in faith; one is either for or against." All these were released on the Catholic church's website. The Philippines bishop went one step further, calling it the "devil's work."

Both their messages reminded me of PAS back in Malaysia, who wanted to ban all kinds of concert on religious grounds. Their targets included names like Elton John, Avril Lavigne and Rihanna. It reflects a similar under-siege and easily offended mentality: These artistes are the "enemies", they threaten "our" religious way of life and watching these artistes will cause you to "lose faith".

To me, these messages reflect a sense of insecurity. That in asking people to not see these shows, you are hoping to avoid potentially awkward questions coming your way. Perhaps you don't have faith in your own people or your teachings, in that viewing a show that goes in contrary with your worldview will cause people to walk away. Maybe you expect blind obedience to your faith, with a distaste to views that are different than yours.

Attacking people like Madonna on the ground of religious sensitivities sounds more like an excuse to me. For Christians (and Catholics by extension) especially, One of our core beliefs is that there will be an end time. If you believe in that period, do you think that enemies of the faith will be so nice to you? That they will not try to upset you? No! You will be called names, you will be tried, you will be mocked and you will be tricked. If you can't even stomach a simple concert, how can you expect to withstand the trials of end times, when the devil will reign?

Besides, who are you really worshiping? The almighty creator of the universe or your own ego? If your god is the almighty creator, do you think he gets worked up over who performs which concert where? If he's a loving God, which do you think upsets him more: The millions of suffering refugees or a Madonna concert?

So why are we so concerned about a concert rather than the injustice faced by millions? Is it because our little ego and pride feels hurt? Is it because we want to make ourselves feel better instead of really protecting the Lord's image? That in fact, we are really trying to protect our own pride here?

Moral policing is increasingly becoming irrelevant in our society today, if religion wants to remain relevant. It seems to me that believers are still really much treated like children who needs to be protected, rather than logical, thinking adults by church leaders. And this can no longer work in our society today, where people are becomingly increasingly educated and critical, and who value their own opinion above everything else.

If governments can no longer execute a "I know all" approach in governing, how can the church expect to do the same? The generation today wants to be continuously engaged and allowed to voice their own opinions, and to go against this would only serve to further alienate them. So is it that surprising that there is an increasingly mass exodus of the young out from the church?

There is a serious need for the church to change. Rather than make general statements like what Archbishop Goh did, and end up getting mocked left right center, the church needs to re-look itself. This is not to say that the church should immediately support Madonna's concert, but it needs to adopt an approach that is less authoritarian and more engaging..

Rather than just dismiss Madonna's concert for example in one sweeping statement, the church should instead examine if the concert is that bad an influence or is there even a need to be concerned. In putting out statements like this, it only serves to further damage the church's image than help it. Besides, would the church's time and energy be better spent elsewhere on causes that matter more? Why does the church still sees itself as one big moral police? How are we supposed to reach out when we act like a know-it-all or a big bad bully?

The days of church knows best is over. It's time we start acknowledging that.