Earlier this morning, Singaporeans were greeted by the shocking news of a man who was killed while trying to escape from a police barricade, nearby Shangri-La Hotel, where a high-level security summit is taking place. Of course, the first reaction that some of us had in mind when we first see the headline, is whether it has anything to do with terrorist attack, considering the recent report of the arrest of two radicalised youths.

The assumption was quickly dispelled when as we read more and the news updated, with police reporting that only drugs were found in the vehicle, not explosives or firearms that we would expect should it have been a attempted terrorist attack. It would seem that it was an unfortunate accident where the drug smuggler was caught in a security check not intended for him and attempted escape in a moment of panic. In the Singaporean term, he was suay.

What I don't understand, however, is why some people like the admins at the All Singapore Stuff Facebook would want to sensationalise the entire incident, posting up headlines that question the police motives and to fit it to their anti-government agenda. Screenshots copied below: 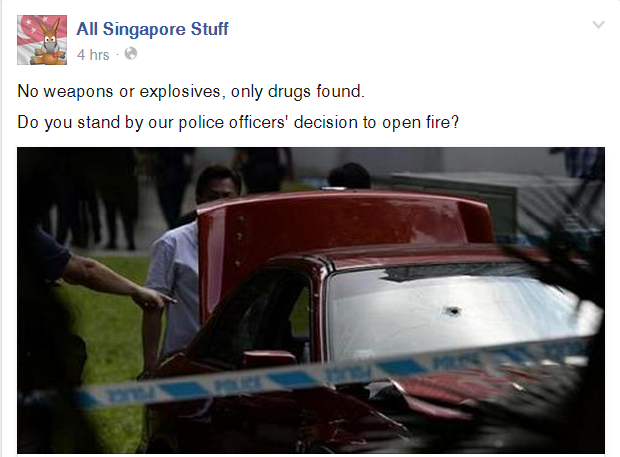 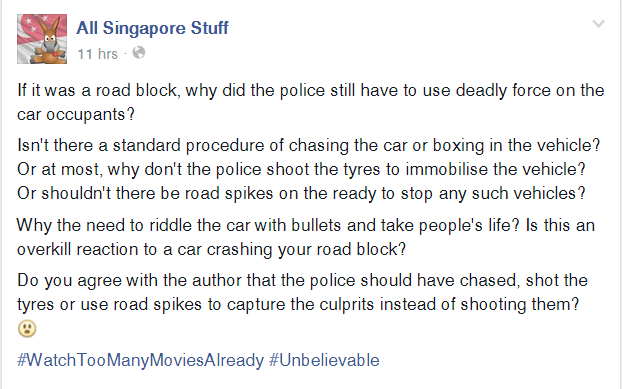 After realising that the picture only showed one bullet hole, they went and change the headline, but without first acknowledging the "riddle the car with bullets" line.

We may be calling for more freedom of speech from the government and telling them that we can be trusted, but when people go and do stuff like this, it is really hard to justify our demands. After all, how can we expect the government to trust that we are mature enough if all that we're looking to do is to stir trouble and be mischievous? Where no matter what the government does, our sole aim is to blame the government and pull them down?

I am sure if the police officers didn't shoot, the captions would be somewhere along the line of criticising the police officers as well, asking that why they are so coward not to shoot and what happens if the driver is indeed carrying a ton of explosives in the car. Of course, with the government being the government, the more you push them into a corner, the more they will clamp up and refuse dialogue. In the end both sides lose.

But I suppose the page like ASS is not looking for dialogue but hits instead. This is not the first time the page called ASS (not sure if they named it on purpose) have posted articles with such agenda-laden headline though. Their posts are usually really anti-foreigner, akin to what The Real Singapore used to do. Heck, if you ask me, they may be very well TRS's spawn. Just look at how they caption and hashtag a video from Hong Kong. 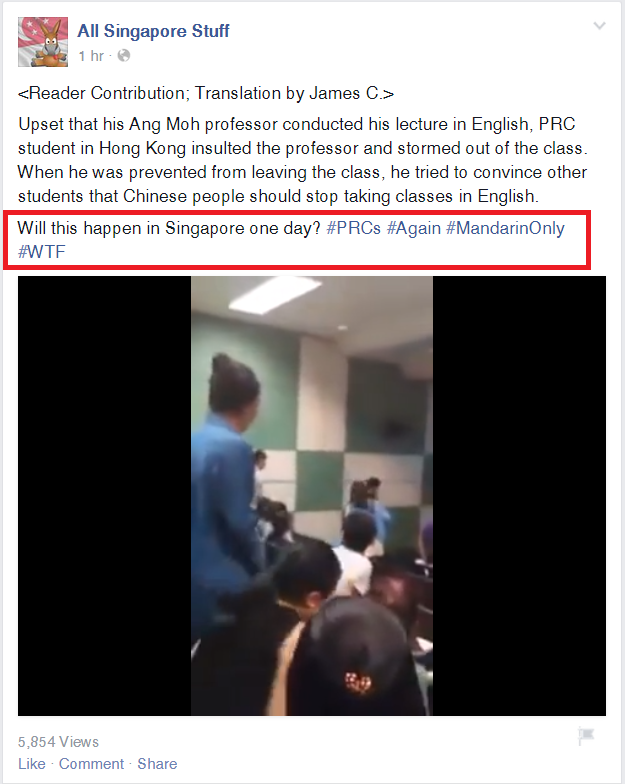 The modus operandi is really similar. Stir animosity and ill-feelings towards other groups for the sole sake of creating trouble, without suggesting concrete solutions or raising legitimate issues. Just capitalise on the ground unhappiness and fan the flames. The saddest thing is that usually it's the controversial stuff that sells.

Some people just want to watch the world burn, don't you think?