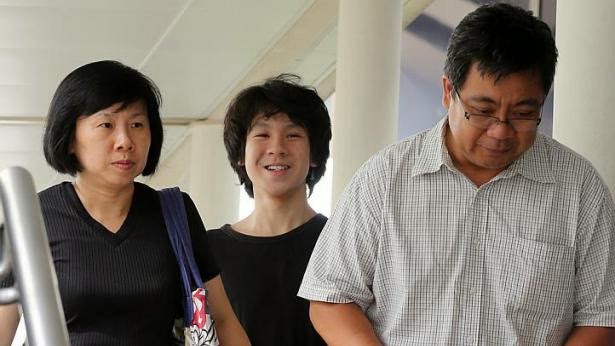 1. I am a fan of observing human behaviour, and understanding the motives behind the behaviour, and the immense attention that is given to this boy called Amos Yee over the past few days has really gotten me curious over him. (Plus he is really trending right now so this will help me score some cookie points).

2. This will not be a post of political nature though, so I will not be focusing on the persecution on him or how his actions fit into the political landscape of Singapore, but rather I want to look at the individual level. His thoughts, his actions, his motivations.

3. Of course what I will be saying will be mere speculation, not expert opinion, don't think I'm qualified to make one, as I am not him. And I have only limited information about him, basing on just his video and his blog post about his experience in his secondary school. I might be floating a few theories on his personality as I go as well.

4. Firstly, I think that he is highly intelligent. Looking at the way he writes and articulates himself on his blog and Youtube, I think his command of English is impeccable. He is able to organize his thoughts on a consistent manner as well, looking at how his rationalizes and explains the surroundings around him in his blog post. That is beyond doubt.

5. But I don't think his level of intellect may be due to parenting or schooling, given how his parents are unable to control him - his mum lodge a police report just to get him under control - and how he hated his teachers in school as well. A natural bright spark? Very likely.

6. A lot of people have recommended counselling as an approach to "rehabilitate" him, but I doubt this will be useful, not now at least. Perhaps in the past when he was still struggling in school and life, when he was trying to fit in and find his direction, but definitely not now. My personal feeling is that counselling will only do more harm than good.

7. I think the main reason why counselling would not work, at least for now, has to do with Amos's view of the world right now. From the way he spoke in the video and how he criticized a cousin in a blog post for pranking him, I think he harbours a lot of hate for this world. That he is above everyone, that the world does not understand him because his level of thinking is different. And in a way this may have caused him to be resistant to any form of method that involves telling him that he is wrong.

8. He is very critical of things around him as well. Friends, teachers and leaders. All of them were viewed in a very negative light. Reading his posts and watching the video, it almost seemed that he has no positive preferences for anything. Except the use of profanities.

9. He blames everyone for the things he is feeling. For not being able to fit in. This further fueled his anger and hatred to the world, which I guess is a vicious cycle when you end up hating almost everything in the world.

10. I would be very interested to find out what his likes are, what are his area of interests and how he talks about them. Like his favorite author for example. Or his favorite music.

11. Judging for his like for Where the Wild Things Are, according to Alvinology, I am guessing his has a soft spot for things that don't fit in. Though I would be interested to know if this is the case. If it does, then it speaks a lot about how the world is treating him.

12. His lack of empathy, that he mentioned in the blog post, is a troubling trait. He may be super intelligent, but without the ability to feel, it could well make him a sociopath. Someone who manipulates others for the betterment of himself, who feels no remorse for his actions. Or perhaps an Aspergers, who may just not understand social cues.

14. But I think one thing that we shouldn't do to him is to throw in more punishment to him, because that would only fit in to his worldview that people are just out to get him, that he is special amongst others.

15. I would suggest a debate, but I am not sure how receptive he would be in changing his opinions, or considering the opinions of others, looking at how he reacts to viewpoints that are contrary to his.

16. I think he might be a genius, though the way he is using it may be all wrong right now. The school hating part surely did not help. And it's not focused way in the wrong direction.

17. But what is true is that he is way beyond his peers in terms of how he thinks, and the way he interpret the world. Very logical, I would say, though a little hostile.

18. Still it may be good not too worship him that much though. Because it is usually charismatic people like him who form cults fulled of adoring fans, and already I am seeing people who are defending him just because what he is saying fits their belief. Don't agree for the sake of agreeing yo.

19. But he cannot definitely be ignored. Because I think that would only accelerate his path towards a non desirable outcome. Not sure if we want the next supervillain to come from Singapore. This guy needs to be engaged, though how receptive he may be is still a question mark.

20. Still I won't blame it on the parenting. There's just too many factors involved to make a conclusive statement.