RE: The Big Gushcloud Expose. Some Thoughts

*If you're looking for thoughts on the second part of the expose, click HERE*

I have been reading the Big Gushcloud Expose with great interest since the post cooked up a storm in Singapore's social media scene. Or at least that's how all my news feed looked like a couple of hours ago. Some likened it to Singapore's own version of #instapurge, with the amount of damage that the post could potentially cause. As usual, I read the entire post with the amount of interest that I usually give to my dramas, not exactly going overly enthusiastic about it.

Still, judging from the amount of traction that the post has garnered, I must say that it is hard to ignore. After all Xiaxue is still pretty much the queen of blogging, and the topics that she usually touch on are quite controversial if not headline worthy. From hater men commenting on the web to once upon a time Peter Coffin and even once a longer time ago Dawn Yang, she has the ability to get people talking. Like loads of them. And this time, she set her sights on Gushcloud.

To give a little background information, Gushcloud is a rival company to Nuffnang, the blog community platform that Xiaxue is signed under. This was not the first time that Xiaxue has had a sort of indirect skirmish with Gushcloud before, one being with Eunice Annabel this year (who was surprisingly managed by Gushcloud) and another being her Dayre post.

However, this recent post seems to be much more serious in nature, with Xiaxue calling out the company for being unethical. She alleged that Gushcloud inflated their earnings, asked their influencers to mask clients' ads and inflated their clients' page views. In essence, it is akin to calling Gushcloud cheaters. These allegations could seriously damage a company's reputation, with the ability to bring them down too.

Now I don't know if this post is motivated purely by personal reasons (ie Xiaxue having a bone to pick with Gushcloud) or whether it is part of a smart corporate move (would be interesting to find out how Xiaxue's 'boss' factor into this, or whether he knows Xiaxue's intention to blog about this), but in Singapore, having the 'queen blogger' train her sights on you is akin to having your social media death warrant signed. Just ask Peter Coffin.

At the time of writing, there is already an article of Channel News Asia about Gushcloud mulling their legal options as well as Gushcloud trying to save their reputation through a Twitter campaign. A counter Instagram account was created too in support of Xiaxue, and from how things are going, this is set to be an all out war.

Given Xiaxue's power and influence, I would not be surprised that the move would potentially kill off Gushcloud, or at least erode a considerable amount of confidence in it. I mean in the corporate world, the last thing clients would want is a company with bad reputation. There is very little chance that Gushcloud would emerge from this unscathed, even if their legal team is able to piece a case out of this. Am not a legal expert, so no comments from me.

However, two 'not so good' outcome/observation could result from this fiasco.

Now, while I'm not saying that Nuffnang is bad, but when you only have one company managing bloggers without any competition, things can go bad pretty fast. Any form of monopoly in any sector of business is never good, I can tell you that, because it allows the monopolizing company to get complacent. For companies to continuously improve and to offer the best, at least some competition is healthy. And that is what Gushcloud, inadvertently, provides.

X knows this, so it chooses to increase its charges as it likes, and you are still unable to do anything, because you can only get internet through X. Complain as you might, you are stuck with the company. Which gives X the free rein to exploit users however it wants to. It is an unfair system where no innovation or progress would kick in.

Things would be much more different, say if another internet company is around. Say Y. Now with X and Y around, both companies know that they cannot anyhow exploit users, and have to strive to provide the best service to attract and maintain customers, lest they run away to their rival company. The competition forces X and Y to continuously improve their service quality, and if you find yourself being unhappy with any company at any time, you can always switch.

The same could be applied to the blogosphere. If only one influencer company is allowed to dominate, the only ones to suffer are the bloggers. I am not saying that Gushcloud is completely innocent, after all they must have some dirt to start with for Xiaxue to write that post, but one unfortunate outcome may be the lack of competition that the blogosphere may face after this. I'm fine with the whole thing as long as there is another influencer company which can rise up to offer the competition. Monopoly, not good. 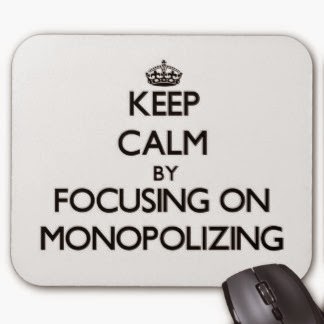 The second sad outcome that I see is the amount of hate that Xiaxuebots are throwing. While I have to give credit to Xiaxue for the amount of effort that she has put in to expose Gushcloud, one year is god damned long (even longer than writing a thesis) to plan the downfall of someone. It is a well calculated move with monetary investments thrown in as well. I must say, the amount of effort put in is amazing. Which is why the title of queen blogger is worthy for her.

However, like she said at the end of her post, some bloggers are unwittingly thrown into this whole fiasco, without them asking for it. Not all bloggers are as famous and well paid as Xiaxue, so sometimes we have to make do with what we have. Even if that means masking our ad sometimes. It is not an uncommon practice though, as far as I think of it. I mean take TV eating shows for example. I am sure some restaurants pay the TV to do a review their place, so why bloggers cannot do the same? Why don't TV channels get labeled unethical? (edit: a reader said that TV shows don't really do this, so I stand corrected).

I don't think masking ads is a totally unethical thing to do. Inflating your views, yes, but not really masking. That is really up to the blogger, where your ethics lie. What bothers me more is how some xiaxuebots (I call them xiaxuebots because they seem to do whatever xiaxue wills them to do, even going over and above what's intended) have been treating Gushcloud bloggers. Just look at the amount of hate piled up against Yilin (some screenshot below). 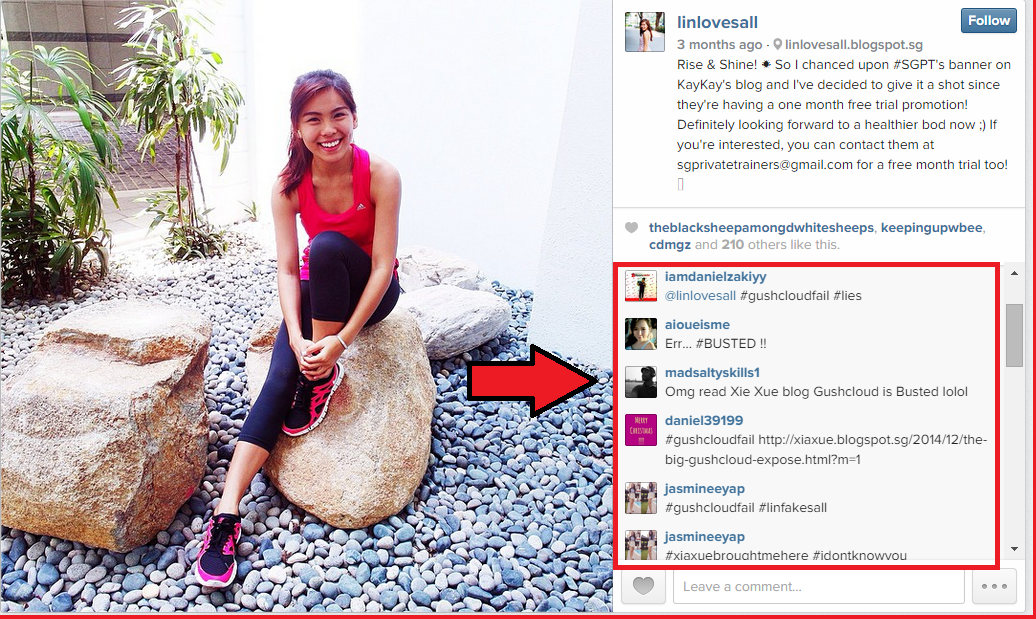 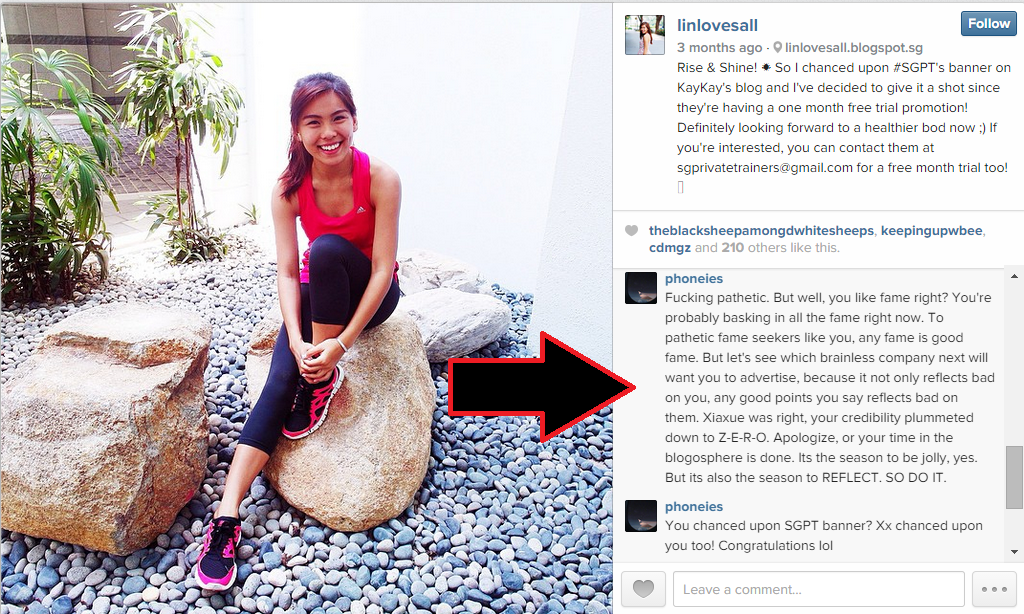 While I don't really endorse her behaviour of not being exactly truthful, I do find the mob lynching of her quite disturbing. It's one thing to doubt the credibility of a blogger, it's totally another to call them pathetic or any other hateful comments. It is kinda ironic though, because for all Xiaxue's hate in haters, it's sad to see that she is indirectly encouraging the phenomena as well. If you don't like the blogger, you can just don't read the blog. Unfollow that Instagram account. Ignore the said blogger. What do you possibly hope to accomplish by putting someone down online? Does it make you a better person to be able to call someone else pathetic online? I don't think so.

As a blogger, I know the dilemma of being faced with post that requires you to mask an ad. I mean when someone offers you 200 SGD to mask an ad in your post, it is really hard not to accept the offer, especially when you need the cash to help your daily expenses. As this blogger puts it, even Xiaxue is not entirely innocent of ad masking (his grammar is horrendous though, which does not really add credibility to him defending Gushcloud. Not reading over his post is a lame excuse for the grammar mistakes btw).

Like I said, it saddens me to see how some are acting like xiaxuebots in their speed of directing their hate towards Gushcloud, without first thinking for themselves exactly how the entire situation is like. It's like Xiaxue says 'Hate', and all of them go swarming over a poor person's profile spewing hateful and self-righteous comment. In Eunice Annabel's word (she wrote a post in reply), it's like them 'making this drama their personal problem'. Just curious on what they stand to gain from all the hateful comments, tbh. Some form of self-validation, I guess?

Still, the entire drama is still in its early stage. The ending has not exactly been played out yet. Will Gushcloud move forward to sue Xiaxue, resulting in her dethronement? Or will this thing end with Gushcloud's demise, with Xiaxue reigning supreme again? Will the entire social media scene in Singapore undergo a major change in light of this? Or would this drama die a natural death, replaced by another more exciting drama soon after, like how they always do? Will Lukey remain handsome forever? Only time will tell.

For those who are sitting on the fence like me (ok lah I'm sort of under Nuffnang so I guess that makes me on Xiaxue's side), it is time to grab unto those popcorn and see how the entire drama turns out. More exciting than what you can find on Mediacorp, that I can tell you.

p/s: So Xiaxue decided to go after Kife, that poor dude. Still, can't blame anyone cause he practically shot himself in the foot. Hopefully I have no dirt for her to dig up

pp/s: Grace seemed to have written it on another angle in her blog

ppp/s: Gushcloud influencers, Kaykay and Eric, have came up with their own versions to the event, which is written HERE and HERE. Both offered quite a comprehensive view on the entire issue from Gushcloud's influencers side, and I must say, Kaykay offered quite a convincing argument over Xiaxue's motives. Though the numbers side is still quite hazy, and think one has to pull all the info from both sides, as well as do some personal sleuthing to really confirm the numbers. You might also want to read Athea's response to Xiaxue personally. The ball now is back in Xiaxue's court, I guess

pppp/s: Gushcloud's official statement. Seems like a little mistake by Vincent cost him dearly eh. With this I believe it has come full circle. This post will no longer receive any updates.

ppppp/s: Okay I'm actually going to update this, just because SMRT Ltd (Feedback) is having a showdown with Xiaxue.