Heather Chua vs All

The Singapore social media scene, after being relatively quiet for quite some time since the last incident (can't remember if it's Jeraldine Phneah or Ridhwan), is once again brought to life, this time by a 'girl' called Heather Chua. Her stories have appeared on Stomp (here, here and here), and has been shared extensively by Facebook, which was where I picked up her story.

Two friends shared about her recent post about the ITE grad marrying a wealthy RGS alumnus (which was surprisingly familiar with Singaporean writer Low Kya Hwa's novel, A Singapore Love Story), and subsequently the parody page of SMRT Ltd (Feedback), a well known 'trollster' page on Facebook, decided to go on the offensive on 'her'. I don't know the exact reason why, there was no indication on their page or Twitter, and by the time it appeared on my newsfeed, the battle was already underway.

As I wanted to capitalize on this issue for visits was feeling curious, I decided to poke around myself.


As of the time of writing the people at SMRT Ltd (Feedback) has been doing a pretty amusing and interesting job at exposing this Heather Chua, and the story goes that Heather Chua is actually a guy who preys on girls using modelling assignments as a bait, and is nowhere near who she claim she is (a wealthy girl who owns damn a lot of rich cars and lives at Sentosa Cove). Interesting details about her that SMRT Ltd (Feedback) claims include she being actually a guy, lives in Ghim Moh HDB and is not the proud owner of the high end cars she posted on Facebook.

SMRT Ltd (Feedback) has been smart to not release all of 'her' supposed details at once, giving only bits and pieces of information at a certain time like how a true entertainer would, keeping us all on our toes. But as of now, they have released some rough details of the person like phone numbers and place Heather Chua is supposingly supposed to work in real life.

And Heather Chua is fighting back.


From what I noticed, Heather Chua has been around for quite some time already, a quick Google search of the name returned posts from as early as June 2013, more than six months ago, with blogposts warning girls about her modelling assignments (here), as well as a post from March 2013 about her slamming NS Men in TRS (here). Other than that, forums around Singapore were also abuzz with chatter about her.

However, when one interesting thing that stood out from her profile was the apparent lack of activity for six months in between. Which is very suspicious if you ask me.


I don't know if it's Facebook messing with me, but a six months gap of no post is like screaming at your face that she is not a real person. And the posts that she came out with were just so coincidentally related to the scandals that she was creating at that time (1. that she was hiring models and 2. that she was rich). Of course, the lack of anyone defending her (I mean she doesn't have a schoolmate or a classmate from the prestigious schools that she studied at?) is itself a proof that it is a fake account, but I guess we all know that already, so no issues there.

What I am more interested in is 'her' motive of doing all this though, is it because she enjoys the attention and such, or is it a giant big prank pulled by the same people? That remains to be seen. But from the way things are turning out, it's obvious that the trolls with the train (to quote Steevan) have the upper hand, and it woud be best to just sit back and and enjoy the details that they were able to dig up about the guy behind Heather Chua. I pity him though, because he's in for a lot of hurt, if he is exposed. Oh well, weekend drama for all.

P/s: Just don't go flaming on her Facebook page, it's a waste of time, looking at how she enjoys replying and fighting every single comment back.

SMRT Ltd (Feedback) updated their page tonight with two additional pieces of information, one showing a Facebook reset page to Heather Chua's profile and claiming that the true Heather Chua profile can be found in this person's Facebook friend list.


How true is it? Right of now they're still releasing information slowly to build up the suspense, so there'sno telling when this episode will conclude. I do know that Facebook profiles can be easily hackable (I was a victim once before) so it could be probable that they're actually pointing at the correct place.


And that sort of concludes the second day of the showdown. To be honest if I am the guy behind Heather Chua, the best way to stop this situation from escalating any further is to come clean and show my true face. Of if I am really a girl, just take more photos and show the world I am not a guy. Dragging this drama will only end up really badly for me. It's obvious who has the upper hand in this battle.

But then again we would all not have any drama to watch. Wonder what's in store for tomorrow (SMRT Ltd just announced that they will be ending it tomorrow, January 5th 2013)?

The 12 pm mark came and go, with SMRT Ltd (Feedback) ending the saga inconclusively without revealing Heather Chua's true information. The main reason behind this sudden gesture of peace will forever be known only to both the parties but I am guessing either Heather messaged SMRT Ltd asking for mercy (in which they complied) or Heather managed to blackmail them into not releasing the info or it could be SMRT Ltd decided to play nice. Either way Heather Chua is back (she deleted some posts from her profile), claiming victory and an identity (by posting her supposed class in RGS sec 2).


Without SMRT Ltd (Feedback) hot on her heels, the drama will undoubtedly sizzle, and it seems like for this moment, the person behind Heather Chua may have claimed victory for the day. Her anonymous identity still stands (surprising how not one photo is posted by her to verify her identity?), a woman who is 41 years old this year, filthy rich and lives in Sentosa cove.


A bit of anti-climatic, if you ask me. There's not much we could do anyway, except to see whether the folks behind SMRT Ltd (Feedback) still has any tricks up their sleeves or have are they finally ending this. But right of now, Heather Chua still reigns free and if she is as what they claim (cheating girls for modeling assignments), well. she might just have won. For now.

Perhaps the last and final update on this issue. I'll let the picture do the talking.


Somehow there's an investigation now underway. I wonder if it has to do with anything about Heather Chua being featured on mainstream newspaper. Her last post was around 6pm flaming a girl.We'll see if there's any major updates, but until then, this case shall be closed I guess.

After bouts of deactivating and reactivating her/his (I'll just call Heather Chua 'it', since we cannot ascertain the gender identity) Facebook account, Heather Chua is back at it again. This time posting an angry status update on 3 'commuter' using guys. 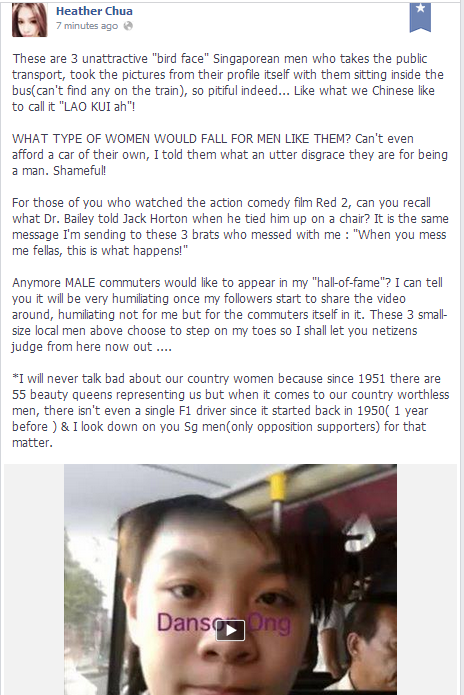 From how I look at it, I am really beginning to suspect that instead of putting up a show to garner attention (and us gullibly being played by it), the real person behind Heather Chua may have more serious issue than just wanting attention. Looking at how it hits everyone who disagrees with her back with a vengeance (including stalking their profiles and creating a video); how it creates elaborate fake profiles (Thimore Jessecca) and conversations to maintain its show; and how it actively disregards the norms of society time and time again without caring about the consequences; suggests a highly neurotic thinking. Split personality disorder perhaps? Or histronic personality disorder? Maybe schizophrenia? I can only guess. But any normal human being will have stopped long time by now.

I think I might just keep myself glued to this entire drama and see how it turns out. 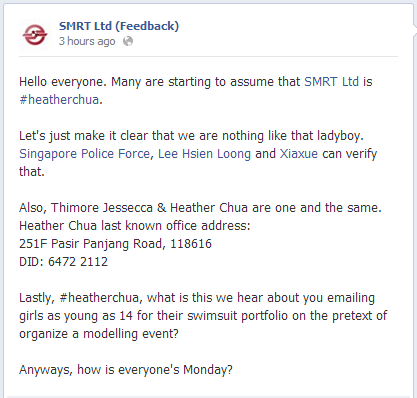 I just find it funny how some guys are actively private messaging Heather Chua when it's clearly not a real person. If there's one thing I learn from the internet, is that you don't easily change someone's opinions through the power of your keyboard, especially a troll's opinion.

The whole saga may just be coming to an end, with the police investigating a 22 year old man posing as Heather Chua, according to Channel News Asia today.


With this in the book I think we can all now move on to the next big thing. The Singapore Advocacy Awards sound nice, but I think the social media scene is going to stay relatively quiet until the next big shot appears.