"Stop blaming us for your tears," says ninja association

Tokyo, 20 DEC - The National Ninja Association (NNA) of Planet Earth has today released a statement demanding that netizens stop blaming them every time a tear is shed from reading online stories or watching online videos. Their actions came as a response to the tendency of netizens attributing their crying to ninja's cutting onions around them. 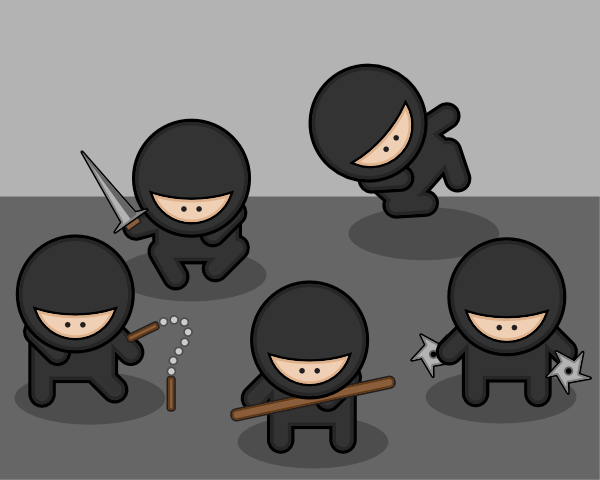 "We certainly do not enjoy cutting onions," the head of the association, Ralphael Mamipoko, said.

"Our daily activities involve much more intense activities such as sword fighting, ninjutsu training and saving the world. Mundane activities such as onion cutting is certainly not on the list. And even if we wanted to cut vegetables, why are we doing it in your house and not our own kitchens? And why onions, not carrots? Carrots are certainly healthier," added Raphael, who's early career included battling criminals in New York city, all from his underground sewer.

The move by the NNA comes amid growing concerns from ninja warriors everywhere on the implication of such tendency on their image. Far from the traditional cool looking warrior with shurikens and katanas, there has been an increasing number of artwork and images depicting the ninjas in apron and cutting onions, and the ninjas are worried that such a depiction would affect the chances of them landing an assassination contract the next time they look for work.

"What's next? Do they expect to blame us for throwing pepper every time they sneeze next?" questioned Raphael.

Not only are the NNA concerned about the longstanding image of the ninjas, they were also afraid of the possible legal repercussions from the assumption that ninjas can enter almost everyone's home. NNA claims that ninjas observe a strict no trespassing rule unless under a contract, and the assumption that they have enough manpower to be almost everywhere all of the time is preposterous.

"We don't enter people's house as they could sue us for trespassing, unless of course we are there to kill them, then they can't kill us after that," Raphael clarified, after which he proceeded to laugh awkwardly.

Speaking of legal actions, NNA has also warned that it would not hesitate to put those who abuse the ninjas name in court. Enough is enough, the NNA president emphasized.

When asked who should netizens now blame for shedding of tears, the NNA president suggested that perhaps we should all man up and just admit that a piece is so moving that it made is cry.

"Or you could claim that Harry Potter is cutting onions underneath his invisibility cloak near you," Raphael said, before disappearing back into the night in a puff of smoke.

The effect from this NNA announcement, however, remains to be seen.