psy: to come, or not to come

Just a few days ago I read about BN (Barisan Nasional), the ruling government in Malaysia but so happened to be the opposition party in the state of Penang, wanting to bring in Psy, whom we all know for his Gangnam Style, to the Chinese New Year celebration that is to be held in Penang.

I chuckled at the move, because not only one can see BN is running out of tactics, but also how the government still thinks that voters can be bought off with some last minute feel good effects such as a big concert featuring a Korean artist. It is also sad to note that rather than using that huge amount of money on more worthwhile matters such as raising the quality of public utilities, lowering the crime rate and increasing wage in general, the government is more interested in organizing concerts rather than tackling the real issues that is bothering the citizens daily. Sometimes, you really cannot say whether it's the Malaysians who are naive or the government itself is naive. 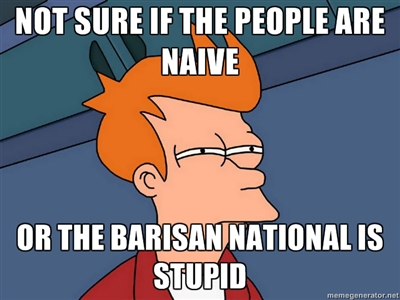 Anyways, to add an interesting twist to this issue, Malaysians have began spamming Psy's Facebook page en masse to ask him NOT to come to the concert that is to be held by BN. A few snapshots of his Facebook fan page seems to show the following (look at the comments section): 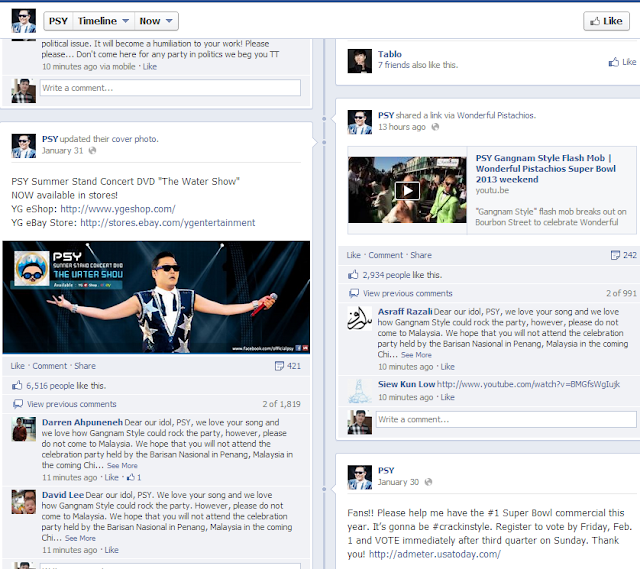 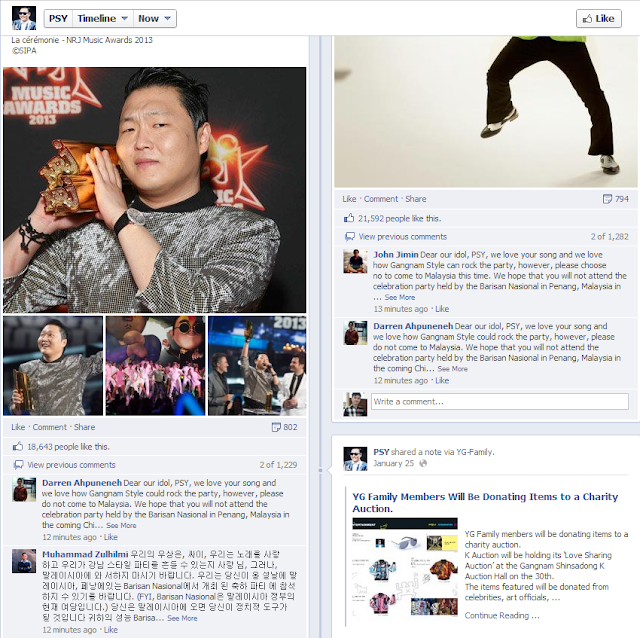 The message that everyone posted read something like this:

I don't know what's the motivation behind this move to stop Psy from coming to Malaysia and as much as I dislike the current government in Malaysia and their childish antics, I think that spamming Psy's Facebook is like barking up the wrong tree. After all, he's a celebrity who is paid to do performances and why drag him into all this mess if he's really your "idol"?

While their intentions might be good, I think it would be better to instead pester the BN party instead, send letters to them, hold protests or spam their Facebook page because it is them who came up with the "brilliant" idea of wasting millions of Ringgit just to get Psy to perform one time. I mean from my eyes Psy is innocent after all and it is those BN fellas who thinks it's a smart move to get a Korean to a Chinese New Year party. Even if Psy doesn't want to come, those BN people can just approach another big artist and waste the same amount of money for the event. Why not attack the problem at the root instead?

To be honest, I think one should not worry so much about the event, aside from the wastage of the money because I have faith that Malaysians are not easily swayed by just one concert. Just do what Lim Guan Eng said, just go there to enjoy for one night but still keep your vote for the better party, the one who does not rely on one off solutions or handouts but instead builds for the future. If you know what I mean.