The war between the Sentinel and the Scourge has been going on for ages now. Numerous heroes have rise and fallen (with every patch update) and yet, the war show no signs of abating. Countless foot soldiers were sent to their doom since the beginning of this war but yet, it is still widely popular among the male population (especially boys yet to hit their puberty).

There's no shortage in sign ups for heroes recruitment for each and every battle. And yes, if you're wondering, I'm talking about DotA. 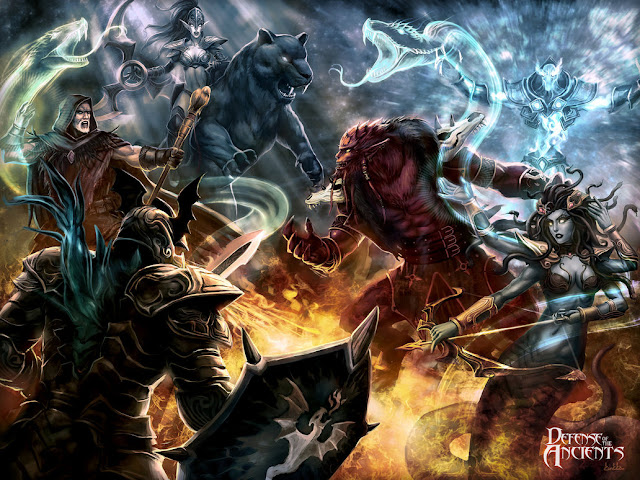 For years now, scientists and not to forget parents and girlfriends around the world have been wondering why would a game like DotA take up so much attention of adolescent boys everywhere, and even some adults who are not so fast at growing up. After all, the game itself is built on another platform (Warcraft 3), there's not much of a storyline involved (other than knowing the Sentinel and Scourge are fighting against each other) and the graphics isn't raelly impressive either (I mean have you even looked at Battlefield's 3 Frostbyte Engine?)

So why is it that even after 5 years from its release, DotA remains one of the most popular game on Earth? What makes it so successful that it has spawned clones such as League of Legends (LOL) and Heroes of Newerth plus now, even Valve wants to release a second installment for the game? And the question all parents/girlfriends all around the world have been asking, why cis my son/boyfriend so hooked unto DotA?


For starters, I guess it's because the game is free and easily available. After all, all you need is a copy of Warcraft 3 (which can be easily downloaded off the web) and a custom map of DotA (also easily available from the web) and voila, you're set to play. Furthermore, in our era of dying LAN games, DotA remains as one of the few remaining games where you can just play over the local area network without logging into the internet and having your game checked for authenticity every you want to play.

Furthermore, the mechanics of the gameplay would ensure that in a way, no two DotA games would ever be the same. With more than 100 different heroes to choose from, countless item combinations and tactics that could be adopted by you and your four teammates, and not to forget your five opponents, there's a limitless of different scenarios and ways the game could turn out.

I guess the feeling of not knowing how each game would turn out and how each new game is like playing a new game every time, adds to the attraction of the game itself. After all, if every match is a completely different new game, it makes the game much more mysterious and nothing could be certain until the very end. That way, you could never really get bored by the game because every time it would be different.

And lastly, the feeling that you get when you win a match is quite addictive, that I can tell you. When you kill an enemy player and see the gold pops up, or when you make a narrow escape in game, it feels as if you're in some bad ass movie being the hero. It makes you feel good and it gives you the illusion that you're superior in skills to the player you just killed. And given that perhaps in real life you may be feeling stressed out and bad all the time, DotA offers a great place to escape.


At the end of the day, there might be countless reasons why your son/boyfriend might be hooked on DotA. He might feel compelled to play because most of his friends are on the game and it's the best place for him to socialize or else he would be left out from the normal conversations that his friends might have. Peer pressure and the want to fit in is a powerful force, that I can assure you.

Or maybe he's just looking for some game to destress and DotA is the best game he can get in terms of excitement and value. Like in my case, I would want to play awesome games like SWTOR but my computer could not just afford the graphics so I had no choice but to settle for DotA. Best option that I had during that time.

No matter what reason a person might have, I could foresee DotA is here to stay, just like how Counterstrike stayed for years as the most played FPS computer game until games Modern Warfare and Battlefield 3 came out. And not forgetting that DotA was also a force that helped pushed Counterstrike off the favorite list of games played at cyber cafe / LAN shops. So unless a totally different and fun game that can incorporate many people playing at the same time that doesn't require you to undergo security checks rivaling of the airport's come out, DotA will stay for quite some time, and perhaps gradually pushed out from the market.

The best way to make someone you care about stop playing DotA? Grab a computer and join their team. They'll be so sick of losing that they wouldn't want to undergo the torture of having someone noob on their team. Unless you turn out to be secretly talented of course.

As for me, I'll be heading off for now. I hear a distant war horn sounding off somewhere.
Labels: Gaming Rantings