Lukey has not been updating his blog regularly as he used to, and this has sparked concern all over the web as he is known to have this "One day, one post" policy when it comes to blogging and it has already been more than three days since his last post. Some netizens are fearing the worst for the self-proclaimed handsome blogger as Lukey has been known to court troubles with the narcissistic personality. Just a week ago, his Facebook profile was hacked into with offensive pictures and posts uploaded to his wall by an unknown hater of his.
According to several sources, they anticipate that should Lukey stop blogging, it would create a massive power vacuum in the blogosphere as there are not many handsome and yet thoughtful bloggers like Lukey out there. A royal inquiry panel has been set up by the Singapore Handsome Internet wriTers, also known as SHIT, to look into the reasons behind Lukey's lack of updates recently. The lead researcher of the team, Albird Einstain, when interviewed, speculates that there might be several reasons as of why Lukey has been updating his blog for the past few days. 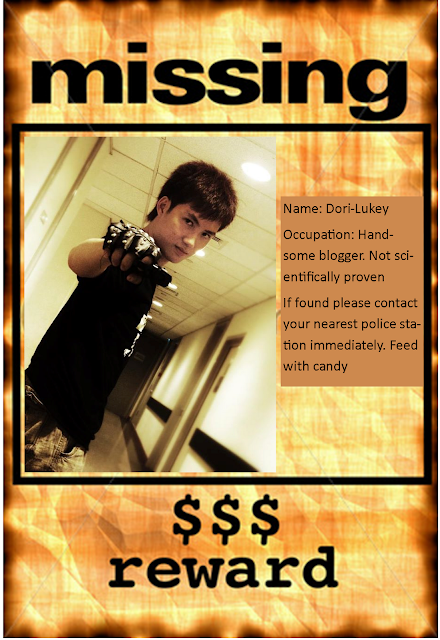 Reason 1: Assignments and homework
The most unlikely reason at all, because Lukey would prefer to do almost anything aside from his homework, even including cleaning his own room, Einstain thinks that there exists a possibility in which Lukey is too busy with finishing all those god-damned assignments that his lecturers have thrown unto him til he has not enough time to even type a sentence into his blog, given that Lukey is now in his final year and he doesn't want to be kicked out of university.
Reason 2: Zombies
Given the imminent threat of zombie apocalypse sooner or later, Einstain theorizes that Lukey might be too caught up fighting zombies in some remote research facilities to save the world. The more likely scenario is that he's most probably turned into a zombie by now.
Reason 3: Too busy gaming
Where else could Lukey be besides sitting in front of his computer, caught up in some make believe universe where he thinks he's the chosen one to save the world? Einstain thinks that Lukey is probably so caught up in gaming that he forgot about something which is known as real life already
Reason 4: No life
Every blog needs content and when there's not much happening in your life, there's nothing much to write in your blog except something like the "clouds look white today" and "the sun came out as usual", which could be another explanation of why the blog was abandoned, according to Einstain.
Reason 5: Lazy
The most likely reason of all, Einstain surmised that Lukey is probably too lazy to update this blog of his, given that lazy nature of his. Heck, he wouldn't even change his underwear if he's given a choice (don't tell him I told you that) so what more a blog. He's probably sitting in a corner, lazing around while procrastinating when it comes to blogging, which is quite sad, to be honest, because one can really gain nothing just by lazing around (except to look fabulous of course, which might be in Lukey's case).
Conclusion:
With the five possible theories in hand, the royal inquiry panel would hope to create a cure that would kickstart Lukey's motivation to blog again and hopefully to be even more handsomer than he is now. Until then, netizens are advised to remain calm and to stare at the wall to keep themselves occupied before Lukey comes online. This newsflash is once again brought to you by SHIT.
Labels: Blogging Random Rantings Talk Cock