I spent almost the entire day today locked up underground without internet connection. Not because I got caught by the police for plotting illegal stuff but because today was one of the full rehearsals for our hall annual dance production that will be happening in less than 24 hours. And I'm in it!
While a part of me is happy to be in one of the most awesome dance item in this year's production, I've always enjoyed myself in Nic's hip hop item, another part of me feels that somehow something is different this year. It's hard to put it into words but still, I'm not feeling the euphoria and excitement that I usually feel when there's a big performance coming up, be it a production, Rag or Chingay. It's more like a routine job rather than something I would look forward to.
Maybe it's all the assignments that are piling up secretly behind my back, ready to overwhelm me once everything has finished. Maybe because I've performed before and things have start to lose its magic by now. Or maybe it's the overtired brain talking. Or maybe it's something else.
I guess I shouldn't be thinking too much already. And I definitely shouldn't be worried over something that I'm in no control of. Because when a performance has already reached this stage, the small details doesn't matter anymore. Because what is important now is putting up a good show for everyone and enjoy ourselves on stage. 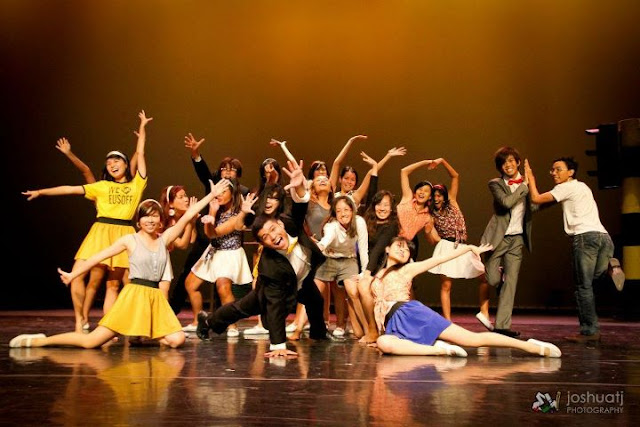 So enjoy myself I shall. the rest of what I want to say will be saved for another late night real life bitching session. To people who would not judge and simply love to gossip, that is. Because I just can't stand self righteous people who thinks that they are very holy and shouldn't be gossiping. But that's another story. For another bitching session. Because Lukey is a bitch.
For any of you who still wanna catch the famous handsome Lukey in action for Eusoff Hall's 2012 Dance Production Family3, you can still get the ticket at http://production.eusoff.nus.edu.sg/ticketing.html. Time for me to get some handsome sleep and look good tomorrow.
Labels: Eusoff Hall Life Updates Random Rantings