So Eusoff Hall's dunno-which-numberth annual production ended yesterday. My second time being in one of the biggest Eusoff Hall events of all time. A show with more than 800 people watching and with a budget that can feed me for more than half a year. And since I have never written any long reflective blog post before regarding Eusoff Hall's Dance Production before, this shall be my first time of doing so. And in essence, you're taking my virginity, so be happy about it.
But before I start, I must clarify that this is gonna be a very personal blog post about what I've come to experience as a dancer in DP (how we affectionately call our hall's Dance Production) so please don't expect something official or a post about DP in general. Because my perspective is only limited to what I've experienced.
The story starts around three years ago, back when I was still considered as a fresh undergraduate in Eusoff Hall. Back then, my dancing skills were mediocre at best and despite trying out for both the Eusoff Dance Group and also Dance Production, I was unsuccessful in either of them. Which was quite sad actually, because almost all of my batch mates who went for the auditions got in without a hitch. I remember feeling quite left out during that period, because the topic most of the time revolved around dance production and how fun it was. I remember watching jealously at them performing on stage from the audience. Someday, I promised myself, that I will be standing on the stage performing for Eusoff Dance Production too.

Fast forward the time to three years later and here I am, performing for the second time for Eusoff Hall Production 2012, Family3.

To be honest, it was fun dancing again this year. Especially when I have the legendary Nicole Tay as my choreographer again this year. She was one of the reason why I had the chance to be in DP last year and also why I like to dance so much. Being in her item alone is sufficient enough as a reason to do my best out for DP and for most of the time this year, that was the sole reason pushing me to my best out to put up a good show.

There's also so much more to say though, both bad and good, about this year's dance production but I think I'll just leave it as a dinner time chit-chat session for now.
For me, I'm just happy that the item I'm in turned out good in the end. All other things shouldn't matter because in the end, I'm just a normal dancer. It's just scary to note how us normal dancers are viewed as relatively unimportant and how close this year's dance production came to being the most controversial one. But oh well, it's not up to me to judge. In case some self righteous people decides to hunt me down for a lecturing session.
Still, some minor controversies aside, this year's DP was in fact different, in an awesome way. The storyline gives a fresh new look to how Eusoff DP have been all this year and the dances were all able to live up to their expected standards. Plus seeing how some of the dancers cried tears of joy after the show, I realized that at the end of the day, it's having a fun time that matters. Because Eusoff Hall DP is all about enjoying yourself on stage and feeling good.
And boom, I killed my dad.
If you know what I mean. 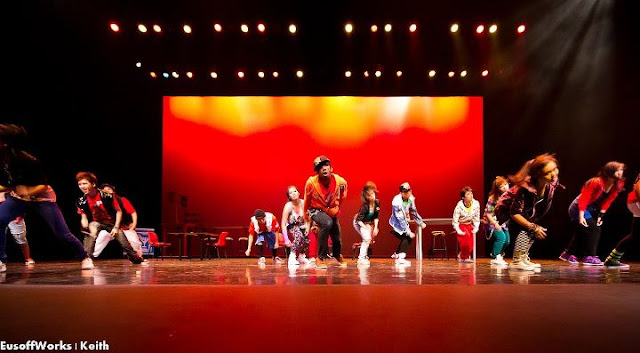