So last week I was in Chingay. You know, the one which is very wet and filled with loads of love? The one that they named it as "A Waterway Parade of Love and Care"? Yep, the 2012 version of the annual Chingay parade that is held every year in conjunction with Chinese New Year, only in Singapore. Not as any normal spectator though, but as one dancing performer.

And a handsome one too.


To be honest, Chingay is a very different experience from performing on stage. But of course, live street performance is obviously not the same as stage performance, and in a way, Chingay is much less stressful as compared to the normal dance concerts or productions that you would normally sit and watch in a grand hall. At least that is what I think.

After all, with 100+ dancers per contingent and plus there's so many contingents which are taking part along with the numerous sectors that you have to perform for, the steps are naturally simpler so that the huge amount of performers would be able to catch up with their steps and not tire themselves out. And after all, it's a parade. Parade are instances where people usually walk and wave to the crowd. Only in NUS would you find overachievers who want to dance to the parade.


Just kidding. It's just that we have to dance anyway as Chingay is sort of like a step up from our annual Rag performance in school and only walking and waving during a parade is just too mainstream. Besides, the feeling of hearing people cheer for you during your dance is too awesome to be ignored. Especially after you just wowed them with your dance moves.

The combination between dance and the parade feel is what makes me enjoy performing as a dancer for Chingay under the NUS banner. Also, performing for Chingay is also one of the closest thing a person could get to being a superstar celebrity. People would want to take pictures with you, shake your hand and cheer for you whenever they see you. Even a little smile from your face can seem to have an effect on the audience. Which is quite awesome, I must tell you.


Furthermore, it's a national thing. Seldom would you have chance to participate in such a big scale event like this. The experience alone is breathtaking. One of the things that one should experience before dying. Being a part of all the grandness sometimes just makes you feel proud that you are contributing to all the awesomeness in a way.

And besides, Chingay is all about enjoying ourselves in the star treatment that we can rarely get in our normal life. At least that's how the saying goes among us senior Chingay performers. It's something for us to enjoy rather than to be stressed over about.

But of course, with it being a government sponsored activity, sometimes one can't help but wonder over the purpose of such extravagant celebration every year, especially after one have taken sociology module that touched about this subject. Something about using carnivals and parades to subdue the population and keep them happy. And how carnivals, parades and shows can serve as illusions to dupe people to believe that everything is all fine and sweet in their life.

The Chingay cheer is one good example. It may sound united and gives the illusion that everyone is indeed united as one, the fact is that most of us did not have a chance to choose. So while it may give goosebumps on the actual performance day, the fact is that it is not rosy as it seems behind the scenes. Which makes me realize that perhaps not everything should be taken at face value.

The idea to include the water pathway is also another example of the demands the performers have to live up with because the "top brass" wants so. Which resulted in us literally getting our feet wet out there. Sometimes stuff can be so subjective.

But abstract issues aside, because I don't really care anyway, being able to perform for Chingay is a great experience. We get to be mini-superstars, experience big awesome carnivals and learn dance moves at the same time too. Which is something that we can't get to do everyday. 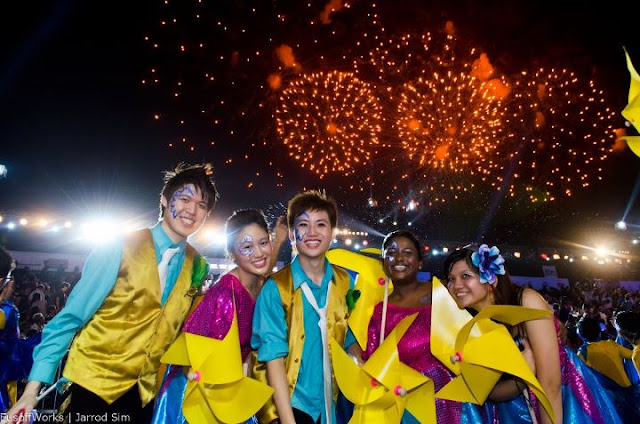 Awesome for decorating your profile. I mean, how many people have the chance of taking a picture with the fireworks behind them?