All Over The Place

It's close to 4am and I'm still very wide awake. Heck, I have not even taken my customary before-sleep-bath yet. And yes I have a strange habit of taking a shower before I sleep. So that I don't wind up bringing all the accumulated dust from the day to my bed. Not to mention that I have not been updating this blog as frequently as I'm supposed to also. Which is why I am here.
Still, as there's not one general thing that I would like to rant about today, I think I'll blog instead about all the random happenings that took place today. So today's post is gonna be all over the place. But to make things easier I think I'll number it. And before I start, here's a potato. Because potato seems to be the favorite object now. 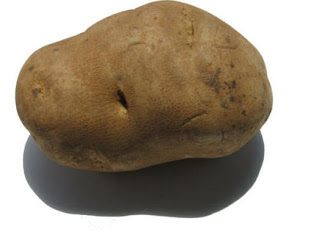 1. Woke up to a rather interesting news about how an NUS Christian group got into hot water for posting insensitive remarks about how Thailand is not a place of true joy as Buddhism is such a firmly embedded religion there and how much of the population of a certain place is M religion and therefore much work is needed to spread the gospel there. The water was that hot that even the NUS provost had to blast out an email to clarify it.
To be honest, I don't blame them. I blame the system. After all, when you are raised to think that your religion is the best and that everyone else is gonna die, stereotypes will naturally arise. And besides, Christianity today is so caught up in making everyone else a Christian that sometimes, it gets pretty scary. Like how Amway members try to force you to become their downline like that. I wonder if the entire Campus Crusade of Christ would be closed down though.
2. 12th Darwin and Evolution lecture today. Learning about his life history is pretty amazing though, that I can tell you. Growing up, I have always believed him to be a bad guy trying to prove Christianity wrong with that stupid humans evolving from monkeys theory of his. I didn't know how that thinking got in in the first place, but I do remember one good counter that I have was that if evolution theory is true, how come we don't see monkey transforming into humans everyday? It sure shut a lot of busy body kids who love to prove how smart they are up.
It turns out that his theory is way much more complicated than merely monkeys transforming into humans. And he was not the evil "I'm out to destroy Christianity" type of guy that I have always pictured him to be. Turns out that he was quite the curious guy as I am today and that his theory is also quite beautiful when you study about it.
Not to mention that the lecturer is funny and sarcastic. Totally worth it.
3. Had another presentation. Ran 100 meters for it because I was late. Panted like a dog while presenting. Lecturer must have thought I was having a heart attack. Not a really good experience
4. Watched the last two episodes of Digimon season 1. Cried again. Nuff said.
5. And made another 9gag attempt
6. Had a long chat with someone. Wished that perhaps things could have been more different in the start. But life's scumbag like that. Because there would never be a U-turn in life. You just have to make decisions based on your gut feelings and what you think is right as you go. I'm just hoping that things would would work out for the best
THE END
Labels: Random Rantings