Time to join in the fun 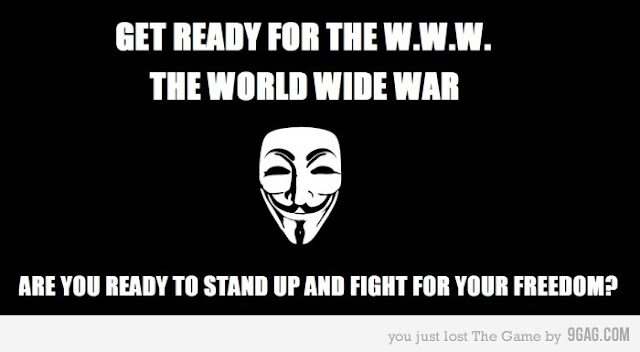 Capitalism.
That's the only one word that came to my mind as I read the growing storm surrounding this new SOPA and PIPA bill that is going to be tabled in the US Congress and the recent shutdown of the famous filesharing site, Megaupload.com.
I may not be the best expert when it comes to stuff like this, but the time that I have spent in my Sociology class in university have at least give me some limited understanding on what capitalism is, the dangers of it (despite what some governments may say) and why the recent developments surrounding SOPA and now the recent close of Megaupload smells suspiciously of capitalism to me.
If I have not mistaken, Karl Marx once inherently opposed the idea of capitalism because it puts too much power in the hands of the business owners and oppresses the working class. Roughly translated to today's concept, the business owners that Karl Marx referred to would be the bosses, CEOs and owners of today's big companies like Nike, Sony and L'Oreal, just to name a few (btw these 3 companies are in support of SOPA at the time of the writing, source here) while the working class would be the normal people like you and me, who doesn't own a big ass company and lives in a mutha freaking big mansion.
Also, Karl Marx also mentioned about how these business owners, the people that earns more than your annual salary in a month, would want to maintain the status quo and would do anything to accumulate more wealth and to secure the power. This is where the principles of "the rich gets richer while the poor gets poorer" comes in because as the people on top earns more money, the money ultimately comes from you. Which means that you have to spend more while the people who owns the companies in which you buy things from earns more.
Yes, despite how some might say that capitalism is all good in that it gives everyone an equal chance, it does not. What you have is only an illusion of an equal chance while the owners create more and more avenues for them to secure the wealth and remain rich.
Which is why I say SOPA smells suspiciously of capitalism. They may champion it in the name of the copyrights but at the end of the day, the true benefactors of the bill would not be you and me, the normal people who uses the internet, but rather the people who owns the rights which ironically are the business owners. You see, everytime you violate a copyright, the common belief is that you are killing the artist who produced the movie or song for example but if you take a look at the bigger picture, who actually owns the artists who made the music? The people who signed them on for the contract. The recording companies. And in a sense, when you violate a copyright law, the people you are stealing from is not the artiste but rather the big recording companies, who in turn has already earn billions and made their owners filthy rich people.
SOPA, if introduced, would literally mean the end of the world for us normal internet users. It gives more power to the business owners to hunt down those that have been violating the copyright laws and that means we could not stream or download our favorite shows from the internet to watch anymore. Not only that, anything that we do on the internet that is remotely linked to copyright laws, for example muttering copyrighted trademarks like Batman, Coca-cola or Ferrari could land us in trouble.
That sounds ridiculous but that is the extent of the law. And even without SOPA, the FBI are able to arrest the owners and employees of Megaupload and is on the process of putting them behind jail, using existing laws. Imagine what power would they have when SOPA is passed. Filesharing sites like mediafire, rapidshare would be a thing of the past, along with torrent sites and also online streaming sites. Heck, you might not even find popular songs on Youtube anymore. Even people who are doing cover songs might get arrested.
This may sound as an exaggeration but in a way this is a war. A war to stop those already filthy rich buggers from sucking out more money from us poor souls. Just Google the net worth of the owners of big recoding companies like EMI or Warner Music and you will know. They have already made so much and they still want to impose more measures to increase their wealth.
Like Karl Marx said, this is one of the dangers of capitalism. The rich and powerful looking to increase their power and influence. Which is why each and everyone of us need to know the extent of this controversy and not just sit idly by, knowing SOPA only as the "thing" that caused Wikipedia's blackout. It's more than that. It's World War Web.
But of course, I am no expert on this issue. What I am writing here is a result of hours of reading countless news articles, blog posts and comments surrounding this whole SOPA issue and I sincerely think as an internet user, all of us should care. I don't only see this as a minor internet law but rather a bigger battle against capitalism. 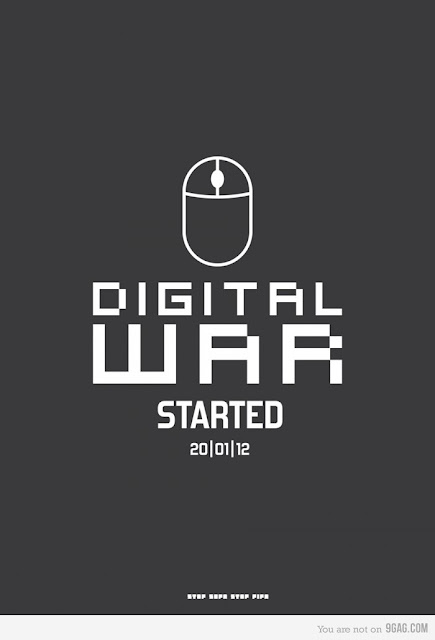 Read more about SOPA on http://sopastrike.com/

Update: The bill was pulled one day after this post went up. 100 points to people power!
Labels: Online World Rantings