I'm a real sucker when it comes to computer games. A big fat super duper power sucker. Even more powerful than the best vacuum cleaner in the world. Because when I find a game that I like I would spend countless amount of time on it. So much time that when I actually get bored, I would have grown Dumbledore's beard already.
Recently, I stumbled upon another online game called Star Trek online. Yes, they made a MMORPG out of one of the legendary science fiction series that even Sheldon Cooper likes. I decided to just dabble in it a bit because I will have 2 very free Chinese New Year holidays and did not expect to spend a lot of time on it because from my past experience, games made out of movies or TV series normally don't go well, like what happened to Star Wars.
Little did I know I would end up with a beard out from this game (because I spend so much time on it until I didn't have the time to shave). 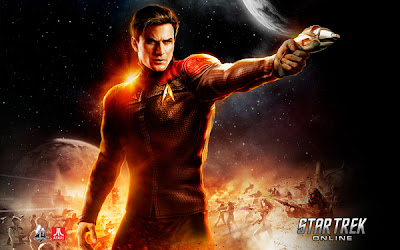 Despite all the misgivings that I first had for this game, I must say that this is one of the best MMOs that I have ever played. Not only does the game stays true to the story line, the gameplay is immense and engaging. If you are a Star Trek fan, or if you love science fiction, you should totally play this game. Like I said, once of the best.
For starters, the game combines two important elements, which is space and ground exploration plus combat from the whole Star Trek series beautifully. Not only can you engage in combat and exploration using your starship in space, you can also beam down to any planet and do the same too. Which means that the whole game itself is pretty immense to explore.
Not only do you get to visit different alien systems in space, you also get to land on their planet or visit famous space stations like Deep Space 9 from the series as well. Very different from MMOs in which you are stuck only in one country, continent or world. This game has worlds. Hundreds of them.
Besides that, everything you own, from your ship to the armor you are wearing is fully customizable giving each and every player a certain distinctiveness in the game. Not only would your ship look unique, it would have unique combat as well as defensive capabilities too. And the range of the things you can choose from, for example weapons, is even wider than the biggest supermarket. Players are really spoiled for choices in game.
Gameplay aside, Star Trek online also offers you an engaging storyline, perhaps the best I've seen so far. Taking place after the 2009 movie, where Spock "seemingly died" in an attempt to save the Romulan homeworld, Klingon and Starfleet conflict have worsened and as a Starfleet/Klingon officer, you have to travel to different worlds doing all sorts of things to help in the conflict. Famous characters like Spock, Jean-Luc Picard and Worf are frequently quoted in the game. And even Paris and Torres's daughter from the Voyager series also made an appearance in game in one of the quests.

My only complain is that the game got released quite long ago, in 2010 and only recently has been opened as a free to play game, which means that there are a lot of veteran players in game already. Also, as the Star Trek universe is quite immense, spanning 5 series and so many more movies, there are a lot of things that one needs to learn in the game. From hiring your bridge officers to ranks and grades, it's quite a lot to digest. But if you're someone who loves science fiction and online games, sooner or later you'll get the hang of it.

All in all, Star Trek online is a great online game, now that it's opened to all players. If you have ever wondered about how it's life to be a Starfleet captain, protecting the universe and exploring new worlds, this is the closest that you can get, provided that holosuites don't emerge in the next few years.

Starting out might be a little tough at first, but once you've gotten the basics mechanics, you wouldn't want to stop. I just wish textbooks were this fun.
Labels: Gaming Life Updates Rantings