RE: Why I Hate Religion, But Love Jesus

There was a video going around Facebook recently, shared by loads of friends of mine, and after seeing it appear in my timeline for a few thousand times, I decided to watch it for myself (the power of conformity). It's a video of someone ranting about religion and Christianity in general so if you're one strong atheist who doesn't give two hoots about this being called God, this post may not be for you. Just saying. Anyway here's the video:
Transcribed audio:

"Because the problem with religion is that it never gets to the core,
It’s just behavior modification, like a long list of chores.
Let’s dress up the outside, make things look nice and neat,
Its funny that’s what they do to mummies, while the corpse rots underneath,
Now I ain’t judging I’m just saying be careful of putting on a fake look,
Because there’s a problem if people only know that you’re a Christian by that little section on your facebook
In every other aspect of life you know that logics unworthy
Its like saying you play for the lakers just because you bought a jersey
But see I played this game too; no one seemed to be on to me,
I was acting like church kid, while addicted to pornography.
I’d go to church on Sunday, but on saturday getting faded,
Acting as if I was simply created to have sex and get wasted.
Spend my whole life putting on this façade of neatness,
But now that I know Jesus, I boast in my weakness.
If grace is water, then the church should be an ocean,
Cuz its not a museum for good people, it’s a hospital for the broken
I no longer have to hide my failures I don’t have to hide my sin,
Because my salvation doesn’t depend on me, it depends on him.
because when I was Gods enemy and certainly not a fan,
God looked down on me and said, “I want that man!”
Which is so different from religious people, and why Jesus called em fools
Don’t you see hes so much better than just following some rules?
Now let me clarify, I love the church, I love the bible, and I believe in sin
But my question, is if Jesus were here today, would your church let Him in?
Remember He was called a drunkard and a glutton by  “religious men”
The Son of God not supported self-righteousness, not now, not then.

Now back to the topic, one thing I think is vital to mention,
How Jesus and religion are on opposite spectrums,
One is the work of God one is a man made invention,
One is the cure and one is the infection.
Because Religion says do, Jesus says done.
Religion says slave, Jesus says son,
Religion puts you in shackles but Jesus sets you free.
Religion makes you blind, but Jesus lets you see.

This is what makes religion and Jesus two different clans,
Religion is man searching for God, but Christianity is God searching for man.
Which is why salvation is freely mine, forgiveness is my own,
Not based on my efforts, but Christ’s obedience alone.
Because he took the crown of thorns, and blood that dripped down his face
He took what we all deserved, that’s why we call it grace.
While being murdered he yelled “father forgive them, they know not what they do”,
Because when he was dangling on that cross, he was thinking of you
He paid for all your sin, and then buried it in the tomb,
Which is why im kneeling at the cross now saying come on there’s room
So know I hate religion, in fact I literally resent it,
Because when Jesus cried It is finished, I believe He meant it." 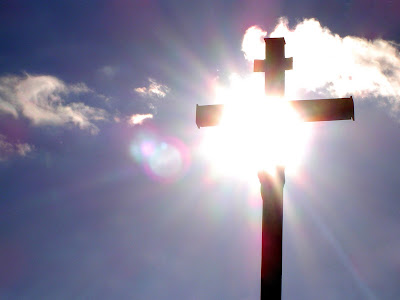 Being born as a Christian, religion has always played a big part in my life. I went to Sunday school since young and every Sunday, church is like one of my routine activities. I grew up in church, had most of my close friends from church and I also learned a lot of stuff like music from church. The only problem is unlike many people who goes to church, I don't really consider myself as a true Christian or some sort. Sure, I might have been baptized and been reading the bible since young but for me, being a Christian mean so much more than being the person I am now.

There was a period of time when Christianity meant the world for me. Like many people who call themselves Christians out there, I thought that Christianity is the only way of life, that us "Christians" are more superior than the others non-believers, and that unless the non-believers "cross over to the light side", they will die a horrible death in hell. Which made me feel very good because my mind would go, "Enjoy all you want in life now suckers, because when we all die, I'll be in heaven enjoying while you all will be suffering in hell". I know it's bad and it's wrong but sometimes when you're faced with people you hate, you just can't stop to think that way. And I'm sure I'm not the only one who thinks in this way too.

There was also the time when I considered myself to be sort of like a commando for Jesus. Everywhere I went, I tried to convert people. I still remember getting into an open debate with a Muslim friend of mine during Form 6 of which religion is the true way of life (I must admit, that friend of mine did come up with some rather convincing arguments). Not only that, the internet also became sort of like my pseudo-battleground, where I go around trying to make people "see". Those were the days.

But as time passed, my doubts began to grow larger, no thanks to my rebellious and curious nature.

In my church for example, I had gained quite of a notorious status among the adults for being the noisy and spontaneous guy I am. Somehow, the people at my church seems to think that if you're not quiet, love to study and act all self righteous, God doesn't seem to love you as much. They particularly hated my questions too. I remember there was once where I was told off by a church elder for wearing short pants during a service one Sunday. He was saying something like it's disrespectful to wear short pants and added that as a Christian I should always wear long pants to church. I retaliated with a question, asking that do we need to wear long pants too when we go to heaven since God hates short pants so much. We never saw eye to eye after that.

Which is why eventually I got jaded with church. All the rules about dressing, stereotypes and what defines a true Christian eventually got to me. I mean, after all, those rules are all man created and each may differ from each too. For example, a Baptist may say one thing but a Catholic may believe another. What determines who's right or wrong? And don't say the bible because sometimes one thing can be interpreted in hundreds of ways depending how you look at it. What makes your interpretation any more believable than mine?

Besides that, there were also so many questions in my mind. Questions like if God said that the only way to be saved is to accept him, what about the people in far flung places who did not have the chance to know him. It's not their choice that they're born in some places like in the middle of the jungle where Christianity has not even reached yet. How can they be saved then if they never get the opportunity to know God? Isn't God a scumbag god if he chose to put them in such places, only to send them in hell later on for not accepting him? How does one explains that?

God works in mysterious ways, that's the usual answer I get, when one cannot explain how things would work out. The fail safe answer. One that creates more questions that its own.

Coming to university hasn't help much either. Psychology, for one, seems to be on its own anti-religious crusade. In Psychology, for example, I've learned that "hearing voices" from god could be a sign that you have Schizophrenia and the classic tales of horror that are usually told by my church people, about waking up at night not being able to move, is a medical condition called sleep paralysis rather than the commonly believed 鬼压身 or visitation by demons that I was usually told.

Not only that, I have also learned that sometimes the worst crimes of humanities are often committed by the so called religious people. The pastor for Singapore's City Harvest church, a church that I used to idolize back in Malaysia, was suspected of fraud (not to mention his primary message is to ask people to donate money), and there's also the Moonies (members of the unification Church) and the incident of Jonestown. All not so good examples of what religion can do to you in the name of God.

Like the guy in the video, I hate religion. I hate how some people who they themselves claim to be the messengers of God could be so outright self-righteous. I hated the fact that every time I see them, they remind me of the pharisees that Jesus abhorred in the new testament and yet, so many people choose to believe them and follow their teachings. I hate how religion has become so imposing, that if you do not do this and that, you are not considered to be a Christian of sort.

I mean, who determine these rules anyway. Who said that to be a Christian, you must attend the church every Sunday, sing some songs, read the bible twice a day, pray before you eat and stuff like that. If taken to the extreme, I could also say that to be a Christian, you must be become a prostitute first or to be a fisherman first because Jesus's trusted disciples were from these jobs. What I am trying to say here is that although I understand that some of these rules may originate from good intentions but when you overdo it, or when you overemphasize it, you tend to become the very person that Jesus hated 2000 years ago.

Yeap, I know I'm sounding a bit pessimistic alright but generally this is how I feel about religion these days. You can think of me as stuck between an atheist and a believer status. But despite all the negativity, a part of me still want to believe that God exists. That up above, someone really does love you, no matter how broken you might be and want the best of you. And one day, after the whole world has fade away, you can finally return to a place that you can really call home.

That's naive, yes, perhaps unscientific and even bordering on a bit of craziness, but one could hope right? Besides, if I were to be a complete atheist, life would be pretty pointless anyway because in the end, no matter what you do in life, you'll become dirt anyway and you cease to exist. Oh well, I'm one troublesome guy. Call me lukeyistroublesome.com
Labels: Life Life's Philosophies Rantings