When a person talks about Ipoh, fun is usually one of the last things that come to mind. Because unlike bigger cities like Singapore or Kuala Lumpur, there's only two shopping malls with two cinemas in Ipoh. And when someone like me returns to Ipoh, there's usually very little to do except the normal activities like watching movies, mamak or just walking around. So it's very normal for me to get bored quickly when I have an extended stay in Ipoh.

However, things have slowly started to pick up in the recent months with openings of more shopping places and I just found out today, an indoor laser tag arena! You know the game that Barney Stinson from "How I Met Your Mother" loves to play a lot?

Going by the name Laser Battle, the place is located on the top floor of Glamour Square in Bercham, which in turn is quite near the North South expressway and the holiday-confirm-packed Kinta City aka Jaya Jusco, making it easily accessible from the major places around Ipoh.


To be honest, I was quite impressed with the place. When my sister told me that there's a laser tag arena in Ipoh, I had in mind some run down place with a not-really-good-environment because this is normally what you get when someone tries to do something big in Ipoh.

It turned out that not only the place was better than expected, it has also quite a great environment inside. I'll let the pictures speak for themselves.

If you ask me, the whole place reminds me of Tron and you're like fighting inside a futuristic battle. The place was also quite big, running around in the arena soon got me panting like a dog and I realized that I might have overestimated my abilities to be an awesome soldier. After all, sprinting in real life is so much more taxing than sprinting in games like Modern Warfare 3.

Note to self: Must warm up before going into a laser tag battle next time.

All in all, Laser Battle is a must visit place in Ipoh. It's a fun filled activity that one can really enjoy with friends. And for gamers like me, it's a really good alternative as compared to sitting in front of the computer. Besides, it's through activities like this that you can truly test your skills and show off to the girl you like. It's quite affordable too as compared to paintball. And you don't have to endure the pain in this game.

And of course, what's a game without a group picture? 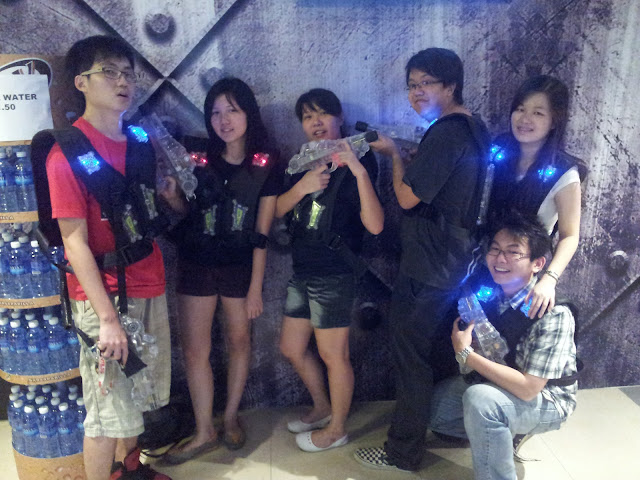 If you noticed, I look quite bad in the photo. Like I said, I overestimated myself. Never should have ran so many rounds in the game.

But still, it was fun! If you're looking for fun things to do in Ipoh, do pay Laser Battle a visit. It's fun, the staff are friendly and the rates are affordable. Just make sure that you're fit enough for this. Or if not, just sit at one corner and camp. And do make sure that they don't go bankrupt before I come back from Singapore the next time because I'm looking for a showdown again!