"It's not how you spend the time but rather who you spend it with that matters." And yeap, that quote is from me, although I vaguely remember someone else saying something like that sometime ago. But who cares, if you cannot remember something, it doesn't exist.
Anyways, I'm sure you know that the year 2011 has come and gone and we're now stepping into yet another new year, 2012, in which hopefully the earth wouldn't end. While it's customary for bloggers to list down the things that they have done and achieved in the past year (a relic from Kenny Sia) or to blog about their new year resolutions, I think I'm gonna save it for later (when there's no topic to blog about) and to share instead with you how I spent the new year because it's so special and different this year!
Before I start the post, I believe that a customary Happy New Year greeting is a must.
And now that you've seen the first handsome picture of mine for this year, it's time for the rest of the post!
So why did I say that this year's new year celebration was special and different?
Well, for starters, I had almost spent every single new year's eve of my life back in my small hometown called Ipoh. Growing up, I was either at home with my family or at church with my church's youth group for new year's eve countdown every year without fail. Not that I'm saying it's not good but when you keep doing the same thing year after year, it tends to get a bit boring.
Which is why this year was special. It was one of the few rare moments in which I had the chance to be somewhere else, in this case KL, on a holiday enjoying myself and really immersing in the mood for celebration. And best of all, I got to celebrate it with someone special, which wass the reason behind the quote I posted up there.
Not only did I got to spend the new year's eve in an entirely new place with an entirely different bunch of people, the whole day was also jammed packed with awesome activities that kept the excitement running.
First there was the famous Klang Bak Kut Teh for breakfast after a fruitful day of shopping the day before. Though I still prefer the ceramic bowl Bak Kut Teh with loads of ingredients inside rather than the meat only Klang version (sorry Jason!), the experience of eating breakfast with your friends over a few cups of hot tea was fun by itself. Not to mention that the sight of a few young people among the sea of uncles and auntie was amusing enough.
Then there was lunch at Petaling Jaya at one of the famous Yong Tau Fu stalls. Though the lunch was intended as the main highlight, the incident where we got lost and ended up going in one big circle quickly became the main topic of the day. It was funny because the car I was in was not really good at producing cool air and soon I was sweating like a dog because I chose to wear a frigging thick long pants for the day. And the sun was burning at the same time too. And in the heat of the moment, I forgot that we could turn down the mirrors for ventilation. Well, I guess that could count as my first pseudo sauna moment in life. The lunch was still good though.
Next we went to 1Utama, a shopping center that I have always heard of but never got the chance to visit, to watch Sherlock Holmes and to hang out while waiting for the countdown party happening later at night. 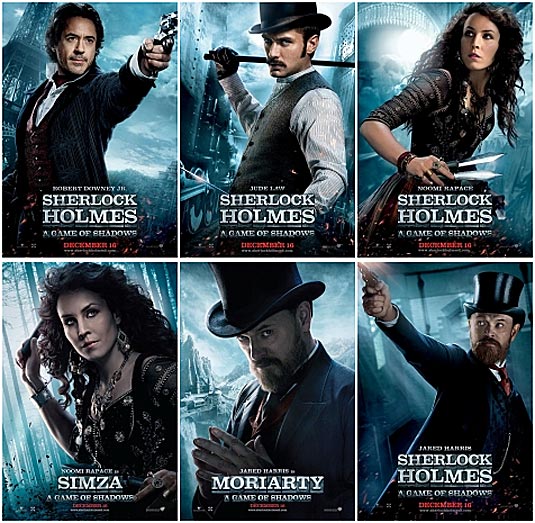 It's the second time I'm watching the movie so I was half expecting to fall asleep but surprisingly I find that the movie was more enjoyable the second time because I was busy looking at the details to see whether what Sherlock Holmes really did what he said he did when he revealed his plans at the end of the movie. And yes, every single detail of Sherlock Holmes' actions was honed to perfection and if you really pay attention to the movie, you can decipher how the movie end even before Sherlock Holmes reveals his secrets. In a sense, this movie allows you a chance to become a mini Sherlock Holmes yourself when watching the movie.
Note to self: Watch Sherlock Holmes 1.
After the movie, we sort of walked around, shopped around and had dinner while waiting for night to arrive so we could make our way to the Curve for the New Year's countdown. And guess what, I spotted a Star Wars deco in 1Utama itself which is quite awesome!
Nerd mode on!
Later that night, we made our way to the Curve where the celebration was to participate in the countdown and to get "foamed". There was a concert there but we did not pay much attention to it because the hordes of people there did not give us much of a chance to enjoy the concert. Instead, we walked around again, tried to find some alcohol because Edmund wanted to drink and ended up drinking a real bad bottle of beer. Ugh.
On the upside, we did have a few moments of laughter when we used the five bottle caps to play a game that we once used to play back in primary and secondary school. You know, the one where you need to spin and hit the bottle caps? It was real funny because after so many years of inactivity, we found ourselves playing like a bunch of small kids with no skills at all.
As the clock tick closer to 12am, we finally made our way back to the main road where everyone was and waited for the countdown. The atmosphere alone was euphoric I tell you. The horns blaring, people running around and the music blasting, the celebratory mode was on alright. And before we knew it, the entire crowd was soon shouting down the numbers and we too followed suit. Thousands of people counting down in unison.
5... 4... 3... 2... 1... and it's 2012!
There were fireworks. 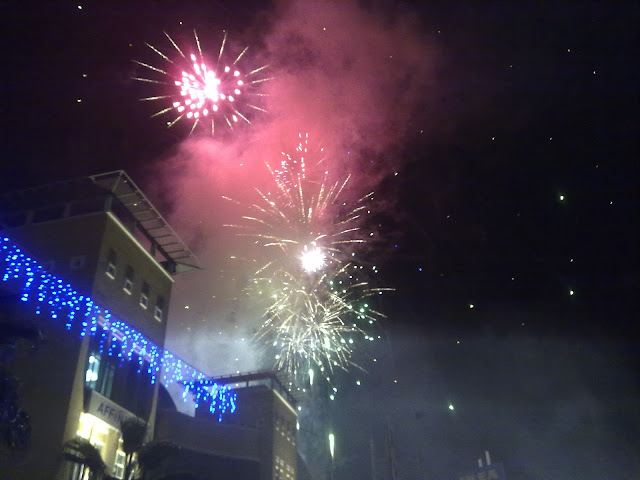 And people were cheering, shouting and enjoying the moment. I was just happy and content to be able to spend it with my friends and people I care for.
And of course, there's the foam. It's sort of like the tradition to spray people with cans of foam and be sprayed back in KL, so I was told. Pretty much like the water festival in Thailand. We were attacked by loads of people and before we knew it, most of us became white foamy monsters. Should I have the chance to spend New Year's Eve in KL again, I'm gonna go prepared. With a whole box of foam sprayers.
Still it was an enjoyable night. It was an whole new experience for me and one that I enjoy really much. And given a chance, I certainly would want to celebrate new year's countdown in KL again. The atmosphere is just awesome. This is certainly one of the best new year's eve I ever had.
Happy New Year!
Labels: Life Updates Rantings Special Occasion