Why 26th December is known as Boxing Day

While the 25th December is known all around the world as Christmas day, on the other hand, not many people knows that the day after Christmas, the 26th of December, is known as the Boxing Day. Well, at least in many parts of Asia and definitely near the place I live as far as I know.
You might wonder, how on earth did the day after Christmas became known as the boxing day? Now Lukey has some interesting theories that may shed light to the reason why 26th of December also became known as the Boxing Day. 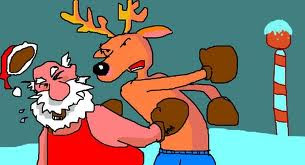 As the picture above might illustrate, 26th December is called the Boxing Day is because well, Santa always gets punched in the face the day after Christmas every year without fail by his reindeers. Just imagine having to work your ass or hoofs off trying to cover the entire earth in just one night. That's an amazing amount of distance that one has to cover in just one night. Even the fastest marathon runner in the whole world can't do it.
And despite numerous attempts by the reindeers to negotiate for a one week Christmas so they don't have to overwork themselves in just one night, Santa keeps denying them the request because he's just too lazy to leave the house for more than a night. Which is why out of frustration, the reindeers have taken it as tradition to punch Santa every year after Christmas to release their anger. And people wonder why they need an entire year for rest.
And thus the act of punching Santa to release your frustration began to spread around the world and slowly, it has became a custom for people to go around on boxing day to punch the people that you do not like and not be reprimanded for it. Yes, even if you hit him in the face. It is a day to release your pent up anger on a person after a year and to know who does not like you either.
Another possible reason of why Boxing Day is called Boxing Day is because of the shopping activities that usually takes place after Christmas.
You see, the period between the day after Christmas and the day before new year is usually the time when most of the shopping malls will have year end sales to clear out their stock for the new stock to arrive. And people would usually take the day after Christmas off to shop for new clothes and stuff. Combine these two together and well, you have people rushing to buy all the stuff that are on sale, thus leading to an increase of violence between shop goers. And the rest is history. 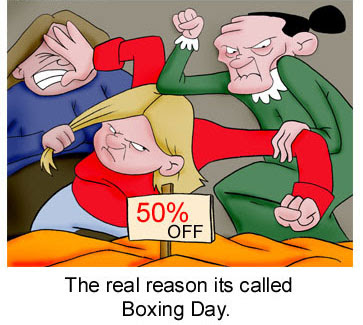 And of course, we could not possibly forget about the amount of party that we had on Christmas night, right? After a hard time partying with lots of alcohol on the night of Christmas, the majority of people would wake up with a major hangover the day after. And when you're having a major hangover, your mood tends to be bad and you're easily irritated. Now imagine almost everyone having the same problem as you. Even a slight bump when crossing each other would lead to a major fight.
This inclination to beat up people the next day of Christmas because of hangover is one the reason why the day is came to be known as Boxing Day. It's because on this day you'll see a sharp rise in arrests by police over brawls on the street. After a while, it's no wonder why the term Boxing Day came to be popular.
Now while these three reasons might sound logical, it is not until later did I realize that the word boxing in Boxing Day is not used to refer to the act of punching people but rather to the container for you to store stuff.
As the internet says, the name boxing day came about from the act of opening the Christmas boxes or presents, thus the name boxing. It has nothing to do with hitting people and whatsoever. So much more dull than what I thought it was. And here was I waiting to punch the person that I hate tomorrow. I even had my boxing gloves ready.
Labels: Random Special Occasion Talk Cock