Jay Chou early in the morning?

I don't wanna do this. Because i know how fast news spreads through internet and how i might end up making another enemy in my hostel. But when you push me too far, i have no choice.
Besides, it's not my fault that you choose to wake me up so early and now i have nothing to do.
I think someone had a sad break up in my hostel.
And he/she feels downright sad about it. He/she thinks that the whole world, or in my case, the whole hostel would want to share his/her sadness so he/she chooses to play Jay Chou's song to vent his/her feelings. Problem is, out of the so many countless songs from so many albums of Jay Chou, he/she chooses to only play one song which happens to be Cai Hong. Again, again and again. 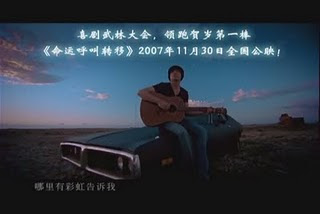 I don't know about other people, but when you force me to listen to a same song for 50 times and made me lose 30 minutes of sleep not counting that i have an exam coming up later, i tend to get a little bit angry. Of course, the best way would be to find the source of music and ask him/her gently to tone down, but i'm not really good at this. The last time i tried, i had to go home with broken glasses and a broken nose. Which is why i'm using guerrilla methods like this to vent my anger.
Ugh.
Well, at least he/she choose to stopped now. Maybe some other people who is braver than me went to shoot that fella. But that's 30 minutes well wasted there. Looks like someone missed out on the development of technology and forgot that there's a very valuable invention called earphones. I don't know. Joshua said it may be an alarm clock, but i don't really take that explanation because which alarm clock that has a capacity to be so loud can play the whole Cai Hong song at the same time?
Earplugs. I really need to get earplugs.
Or a gun maybe.
Labels: Rantings