It was a warning from Singapore's MIB division!

A lot of people was interested about the identity of the so called biatch in my previous post.
("How to spot a biatch?" : Guide To Avoid Biatch-es)
I did not realize how much of a hit it was until people around me started to ask me who am i referring to in my post. To prevent further confusion and speculation, i think i owe everyone an explanation.
Firstly, the biatch post is purely fictional. Any coincidental links with any human being, living or dead is unintended.
Secondly, the reason i made that post is not because i want to flame someone. It is because prior to my post, the Singapore's MIB Division had issued a warning about the probability of biatch-es appearance in Singapore due to the fact that it is a holiday period in the biatch-es planet and they are known to make frequent trips to the Earth. Hence, the increased need for security.
Thirdly, for people who have yet to know, the reason why i came to acquire this sensitive information is because that i am a MIB myself. The reason why me and my friends choose to go to the Dinner and Dance in MIB costumes was not for fun but in fact work. The camera equipment i'm holding that night was in fact not a camera, but an advanced biatch detecting weapon. We have received tips from the Galactic Alliance that a certain biatch plans to interfere with the Dinner and Dance. At the time of this article's writing, we have yet to discover any conclusive evidence. (Original post here: http://cherhong90.blogspot.com/2010/03/we-are-earths-last-best-and-only-line.html) 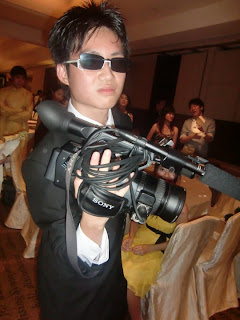 Fourthly, the reason why MIB is concerned about the appearance of biatch-es is because of the nature of the biatch-es itself. According to reports from the Galactic Alliance, biatch-es must be carefully monitored and dealt with because they have the tendency to wreak havoc of the communities they are in. If you have read the guide, you would have notice that the biatch-es like to disrupt normal human social conventions. The reason is unclear, but one theory states that by weakening existing social ties, biatch-es have a better advantage over humans in case of an imminent invasion.
Lastly, if you happen to notice that a particular person you know closely resembles the traits of the biatch i mentioned in my earlier post, do not be alarmed. Or do not speculate that she's the person i'm shooting in my previous post. Like i said, i was shooting no one. The guide provided was an universal guide and the person you know might be a biatch in fact. Do not hesitate to contact MIB directly to deal with the biatch.
In conclusion, the biatch post is referring to no one. It was only a warning from the MIBs.
Labels: Random Rantings Talk Cock