And you thought universities were good...

I suspect that university is not a place of learning as how some people like to portray it.
It's not a place where you can gain new knowledge and uplift yourself from a poor family where your staple diet is only cucumbers to a family where food is so abundant until you become obese.
I suspect there is more than that than just all these fairytale stories.
I suspect that secretly, our professors in university are not here to impart us with wonderful knowledge about humanity. Secretly, i think they are working on a secret project that anyone caught leaking the information will immediately "disappear" from this world (which is why i'm now writing this post under my table, just in case). The scale of the project is so large that they have no choice but to use the universities as a medium.

Eviiiiiiiiil Professorssss
I suspect that the experiment that they are conducting is related to testing the limits of human beings so they can send for war or some further experiments to be some sort of super heroes.
I mean, give the amount of information us university students have to remember, it is very obvious that the professors are testing the limits of how much information a human brain can store.
A few hundred thousand of pages of pure dry facts is not the way to make anyone smarter.
I think that they are trying to come up with some Super Remembering Man that can remember all the criminals' facts and info in an effort so during battle with super villains, Super Remembering Man can use the secret of that super villain wetting his bed when he was 3 to put him to shame.
The amount of assignment we are put through are also an indicator. Come one, in what working situation will your boss ask you to evaluate Plato or determine whether PAP in Singapore is a democratic government? Maybe, this is an experiment to uncover who can handle the gigantic amount of stress generated from these assignments most effectively. As you might know, fighting bad guys and trying to balance your normal life can be very stressful to super heroes, thus the need to address the stress handling ability before making that person a superhero.
And of course, superheroes must also possess a lot of other abilities to make themselves look good on television and to their fans. Who would like a superhero who just know how to whack bad guys but do not how to sing and dance?
This is where the CCAs (co-curricular activities) come in. By making CCAs compulsory, we are forced to take up skills for the purpose of making the superhero to appeal to the opposite sex. You cannot deny that a superhero with a voice like Adam Lambert is definitely going to be more popular than one who sings like a frog.
I think i seriously need to cut down on my time spent on comic books and superheroes movie.
*****
To be honest, the reason why i came up with the crap on top is due to the fact that I'm really stressed to the limit now. I think i'm just gonna go crazy, paint my face in white, dye my hair green, put ugly lipstick on my face, carry a penknife with me and make Batman my arch enemy. 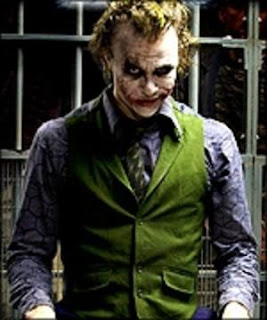 That proves to what extent of all the work on me til i'm willing to make my slogan "Let's put a smile on that face". I have 4 assignments due this week, not to mention one 15 minute video that i have not yet touched and a very important graduating seniors video for my hall (which need me to run around all hunting seniors).
Hmm, just where did i put my penknife again?
Labels: Random Rantings Studies