The Malaysian government has always boasted on the cultural diversity in Malaysia and the freedom that is granted to her citizens regarding the rights to practice their beliefs and religion. The truth is, beyond the tourism advertisements, Malaysians only enjoy a somewhat limited religious rights contrary to what is widely reported to the government. Ethnic Malays, for example, are not allowed to convert into other religions besides Islam according the the law. Any Malays who is caught practicing another faith besides Islam is up for a rough beating from the religious authorities of Malaysia. In line with this policy, people from other faiths, mainly the Chinese and Indians, are not allowed to preach their religion, be it Christianity, Buddhism or Hinduism to the Malays and the act is punishable by law.
Another aspect where religious freedom does not seem much of a religious freedom would be concerning the building of worship places. Permits for worship places other than the mosque or suraus like churches, temples are so hard to come by that the people have to come up with alternatives to find places of worship such as using shop lots as the church. Among the concerns raised by the government over the construction of new worship places in Malaysia includes the subconscious power of the worship places to convert the majority of Muslims our of Islam, which like i said earlier, was against the law.
Despite all of these "freedom", most of the Malaysians have complains because this has been their way of living since young and there have been relative peace for most of the time (despite hiccups here and there like for example, the flurry of protest by concerned "Muslims" over a relocation of a Hindu temple a few months back).
However, recently, the government once again decided to flex its muscle over this religious issue again, this time concerning the demolition of an Orang Asli (the indigenous people of Malaysia) church in Kelantan. The full article of this issue can be found here: http://www.thepetitionsite.com/228/--if-gte-mso-9xml-wworddocument-wviewnormalwview-wzoom0wzoom-wtrackmoves-wtrackformatting/ 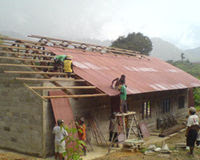 If you are advocate for religious freedom and believes that people should be given the rights to choose what to believe in, please support the Orang Asli in Malaysia in their quest to keep their church standing by signing the petition which can be found here: http://www.thepetitionsite.com/228/--if-gte-mso-9xml-wworddocument-wviewnormalwview-wzoom0wzoom-wtrackmoves-wtrackformatting/

The Orang Asli need every help that they can get. Please help to spread this news to people whom might care too. Every signature counts.
Labels: Politics Religion