Okay, so i skipped one of my lectures today because my stomach wasn't in a great shape. It's amazing how one's mind can come up with all sorts of valid excuses just to skip class but that did not meant that i did not study, in fact i studied more! More in a sense of watching documentary on Youtube, that is.
Today's lecture was about socialization in children and roughly touched on the characteristics that we deemed as human. Are we born human or are we human as a result of our socialization? Of course, this brings in the entire debate of the nature versus nurture influence that scientists, sociologists, psychologists and a host of other professionals would love to argue about. One particular interesting topics that were highlighted in the lecture slides was the issue of gender dysphoria. 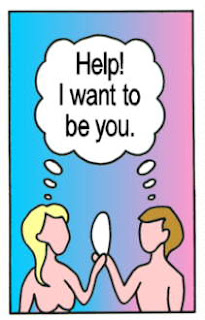 Gender dysphoria, according to what i've learned, is a condition where a person's perceived gender, that is, the gender on the person's mind, is different from the biological sex of the person. For example A is born a guy but A does not feel like a guy at all since birth. In fact, A feels as if he's a girl trapped in a guy's body and wants desperately to change his sex. Do note that gender dysphoria is very different from intersex, in which a person is born with the genitals of double sex. I'll let this video from Youtube do the talking. It has all six parts in total, but you can just watch one to get the idea.

Personally, i think that all this gender connotations are all society generated. A boy does not necessarily have to have a penis, plays toy trucks and dislike pink. The same goes with girl. A girl does not necessarily must have long hair, love dresses and dislike rough sports. If you've noticed, all these ideas are society generated and enforced by society. And why there's a need to segregate gender neatly into two according to physical differences? What about the ambiguous cases like the intersex people? In which category do they fall into? 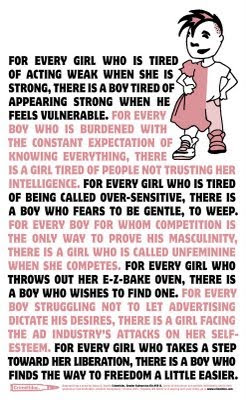 I'm just posting this to provoke you guys to think about all these things, issues that we seldom come in touch with in life. And hopefully, when we do encounter people such as these, we would be more encompassing and less judgmental. Have a nice day.